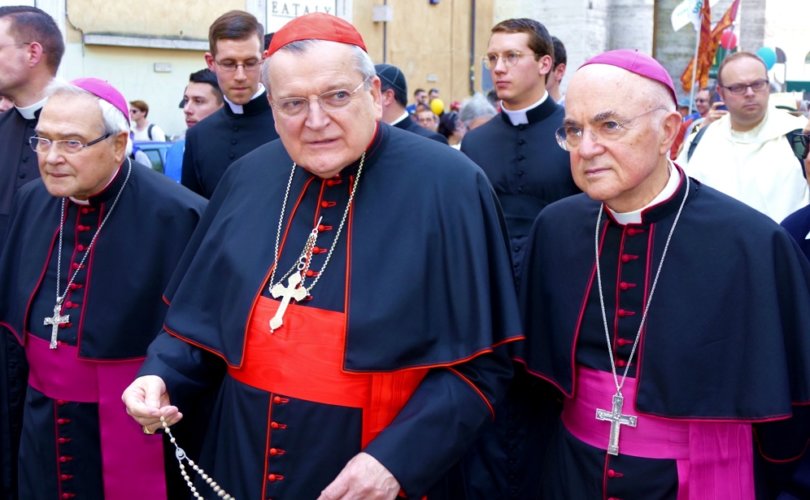 Cardinal Raymond Burke (center) along with Archbishops Ferrara-Comacchio Luigi Negri and Carlo Vigano at the Rome March for Life, May 19, 2018.Doug Mainwaring / LifeSiteNews

August 31, 2018 (LifeSiteNews) – A military chaplain is among those supporters of Ave Maria University now expressing disappointment with its president’s remarks about Cardinal Burke.

Father John Paul Echert, who is also the pastor of two churches, wrote an open letter to President Jim Towey yesterday, citing his “strong” support for Ave Maria over the years. His sentiments were published online by traditionalist Catholic newspaper The Remnant yesterday.  (His full letter is posted below.)

Echert stated that he was “astonished and appalled” by James Towey’s criticism of “some conservative members of the Church,” including American Cardinal Raymond Burke, whom Towey singled out by name, and Archbishop Carlo Maria Viganò. The chaplain thought the university president had been “dismissive” of the Vatican whistleblower’s “credible testimony and firsthand evidence,” as well as “his call for the resignation of those responsible for protecting predators.”

“You would have been better advised to have remained silent rather than attack unjustly those who are solidly Catholic and exposing sex abuse,” Echert wrote.

He said that Ave Maria University is one of the few “truly ‘Catholic’ institutions” that he recommends to students and his parishioners but that he will no longer vouch for it unless Towey publicly retracts his remarks.

Among the President’s controversial statements was the following passage, imputing base motives to both Cardinal Burke and Archbishop Viganò:

Yes, God is full of surprises. But the call for the Pope’s resignation by Archbishop Carlo Maria Vigano’ is not one of them. Neither is the challenge to the Pope’s authority by Raymond Cardinal Burke, an American prelate who has consistently opposed the direction Pope Francis has led the Church on certain matters (and may still be smarting from the Holy Father’s decision to remove him from his prominent position as head of the Holy See’s highest ecclesiastical court). The release of the Archbishop’s manifesto seemed timed to inflict the maximum damage possible to the Pope’s credibility, and the choreographed chorus of support by others in league with them, was just as troubling.

Towey has since offered an apology for his “gratuitous” remark about Cardinal Burke’s possible motives, while still arguing against Viganò and his defenders.

“Such speculation was unfair and His Eminence deserved better,” Towey admitted. “He has been a friend of Ave Maria University since its founding and is renowned for his sincere love of the Church. I will amend my statement on the web site, and I apologize.°

However, the president of Ave Maria University repeated his displeasure with Viganò’s story, saying that his “concern is with the prudence of the public, coordinated release” of the whistleblower’s testimony.

“Can one archbishop be prosecutor, judge and jury and call for a resignation of the pope?” Towey asked.

The circumstances under which Archbishop Viganò wrote and released his exposé of a system of Church patronage which protected Cardinal McCarrick and promoted the Cardinal’s own protegés are well-known. Viganò approached two Italian journalists he trusted and told them his story before writing it down. One of the journalists helped the Archbishop trim away any assertion that he could not prove and make it “journalistically usable”; he testified that Viganò left his home in tears. Viganò told the other Italian reporter that he would share his testimony also with an Englishman, an American, and a Canadian. Before the testimony was published, Viganò went into hiding.

I am a diocesan priest who is pastor of two Catholic churches in the Midwest; prior to this I was a professor of Sacred Scripture in a Catholic University and Graduate Seminary. I am also a Military Chaplain. Having read your official public statement “Regarding the Rift Within the Church” I am utterly astonished and appalled at its content in which you are critical of “some conservative members of the Church hierarchy” as well as Raymond Cardinal Burke (by name) and that you are dismissive of the credible testimony and first-hand evidence provided by Archbishop Carlo Maria Viganò and his call for the resignation of those responsible for protecting predators. You would have been better advised to have remained silent rather than attack unjustly those who are solidly Catholic and exposing sex abuse.

In past years I had been a strong supporter of Ave Maria as among the very few truly “Catholic” institutions I recommended to my parishioners and students. The faithful of my churches are a mix of traditional and conservative Catholics, many homeschooled, and some have attended your Institution. I assure you that unless your statement is publicly retracted I will NEVER again recommend Ave Maria to anyone and I will identify it by name among those institutions which should be avoided by Catholics. Better to attend a secular university than a “Catholic” institution which is not solidly Catholic.