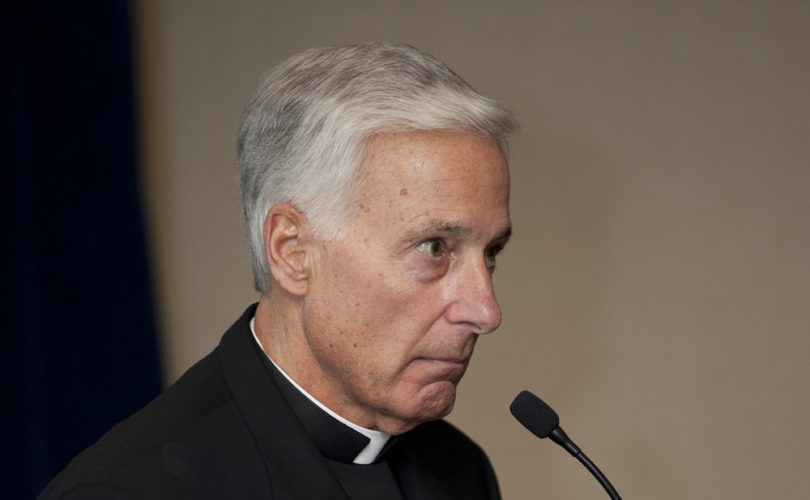 NAPLES, Florida, September 23, 2016 (LifeSiteNews)—We are at a “precarious moment in our history” when churches must speak truth to power or risk the loss of a lot more than their tax statuses, former Ave Maria Law School chaplain Father Michael Orsi said in a blistering speech at a National Day of Remembrance for Aborted Children event on September 10.

Orsi, now on the pastoral team of St. Agnes Church in Naples, Fl said, “For too long, pastors and churches have been bullied into believing that they can say nothing political from the pulpit.” The regulation that is used to silence them “was a piece of spite work” against non-profits that had opposed President Lyndon Johnson, he said.

“Let me remind you: the Bible is a political document,” the priest said. “The prophets, including John the Baptist, and Jesus, lost their lives because they spoke the truth to power.”

“The Constitution is quickly being destroyed,” warned Orsi, and “unless the right choice is made in November, we may not have a court that is fair and balanced in its interpretation of the Constitution.”

“Too many of the pastors—too many, practically all—in Germany refused to speak against national socialism,” continued Orsi. “And look [at] the result: millions of Jews, pastors, priests, homosexuals, gypsies all lost their lives because everyone was afraid. What are you afraid of, a couple of bucks? Your tax-exempt status? What’s that going to do to you? Your churches may be closed anyway, because if a certain party gets elected, this certain party said, if the churches do not agree with our interpretation of women’s reproductive rights, they’ll just have to change their doctrine.”

“If a certain party gets elected, I can assure you what kind of judges are going to be on those appeals courts,” he said. And those judges will be charged with deciding whether the government may force churches and religious institutions to pay for abortion, contraception, and abortifacient drugs, he noted.

Furthermore, “I’m not going to vote for a candidate who decides that we can redefine the meaning of marriage,” proclaimed Orsi. “Our opponents believe once they destroy the family, once they destroy the churches, they can re-create society in their own image and their own likeness. That, my friends, is not just political. That is diabolical. Get it straight, for crying out loud! The devil is in this!”

“We are in a battle for the soul of America,” he said.

“Somehow, [Christians] have come to buy the story that you cannot be political in church,” said Orsi. “Let me tell you right now, oh yes, you can, and oh, yes, you better be. Because you might not have a church to go to if you don’t vote the right way in November.”