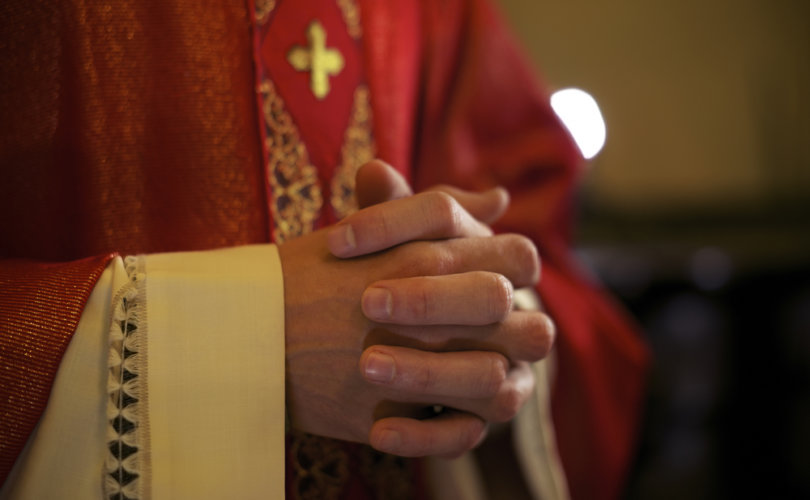 ROME, March 1, 2018 (LifeSiteNews) —  A group of over 500 Catholic priests and deacons in Great Britain are saying the advance of ‘gender ideology’ has become “impossible to ignore,” and they wish to give guidance to clergy and laity on how to respond to it.

“As Catholic priests and deacons we commit ourselves to proclaiming Catholic teaching in this area and to ministering with pastoral charity to those most effected,” they said.

In a statement issued on Thursday, the British Confraternity of Catholic Clergy said that “increasingly” they are meeting individuals in their parishes who are “unable to accept the sex in which they were born” and often believe they “must ‘change’ their sex in order to find happiness.”

Those who suggest they cannot change their sex are “immediately met with charges of hatred and bigotry,” they observed. In this situation, they added, Catholics and other people of good will frequently become “confused or uncertain” about what to think or say.

The whole issue of ‘transgenderism’ is becoming “an urgent pastoral question,” and clergy can find it “difficult” to find a response that is “both pastorally sensitive and faithful to Catholic teaching,” they added in an accompanying note.

With this in mind, the British Confraternity of Catholic Clergy summarized the Catholic position on ‘transgenderism’ in a clear and simple way, to serve as a guide for clergy and laity “as they deal with those affected by this issue, and do their best to guide others.”

The Church’s teaching on ‘Gender Ideology’

In the statement, the clergy underlined that every human being is “a unity of body and soul, constituting a single identity that encompasses every aspect of our being.”

By contrast, they pointed out, the essence of gender ideology is the claim that “our souls, or our psychological and spiritual faculties can be at variance in their sex, or ‘gender’ to that of our healthily functioning bodies.”

A “small minority” of people do find it difficult to “accept their own sex” and seek to be identified as members of the opposite sex, or even undergo some form of ‘gender reassignment.’

Such individuals “need to be treated with sensitivity but also with honesty,” they said. A real solution won’t be found in “rejecting their bodies or medically ‘correcting’ them,” but in “addressing the emotional and social factors that really give rise to this disassociation, known as ‘gender dysphoria.’”

Turning to Sacred Scripture, the priests and deacons explained that Christians believe the body is “fundamentally good” and is never “a mere shell for an identity.”

The Scriptures (cf. Gen. 1:27) “make clear” that sexual difference is “not an accident” but “an integral part” of God’s plan for humanity.

“True and lasting happiness lies in accepting who it is that God has made us, for His plans for us are always plans of infinite love,” they said.

The clergy said they “deplore” how proponents of gender ideology “often seek to advance their cause through polemic and propaganda” which “do nothing” to truly help people who are “deeply troubled” and whose situation calls for “patience and kindness.”

They pointed out that those who have gender reassignment usually live to “regret it,” adding that it can have a “significant impact on their mental health.” Therefore, the “most charitable response” in these situations is not to encourage a person to ‘transition’ but to wait, and pray, and reflect. This is especially true when it comes to adolescents and young people, for whom such an ideology can cause “real harm.”

The Confraternity also said it is “especially unacceptable” that children be encouraged to undergo surgery or take hormones.

“Ultimately we know that it is in the truth of the Gospel and through the grace of the Sacraments that every human being can find the fulfillment that God intends for them,” they said.

In their statement on the challenges posed by ‘Gender Ideology’, the British Confraternity of Catholic Clergy noted that both Benedict XVI and Pope Francis have sounded the warning about this “troubling phenomenon.”

Speaking to Polish bishops in 2016, Pope Francis said ‘gender ideology’ is a form of “ideological colonization” and represents the “annihilation of man as the image of God.”

“Today children – children! – are taught in school that everyone can choose his or her sex. Why are they teaching this? Because the books are provided by the persons and institutions that give you money. These forms of ideological colonization are also supported by influential countries. And this terrible!,” he said.

“God created man and woman; God created the world in a certain way… and we are doing the exact opposite,” he said, quoting a conversation he had had with Benedict XVI.

In his famous address to the Roman Curia in December 2012, Pope Benedict XVI said the “profound falsehood” of gender theory consists in a denial of nature that leads men to “decide that it is not something previously given to them, but that they make it for themselves.”

He explained that when man “calls his nature into question” and makes “the manipulation of nature” his “fundamental choice,” he reduces himself to “merely spirit and will.” He also warned that the denial of nature ultimately leads to the destruction of the family.

“Man and woman in their created state as complementary versions of what it means to be human are disputed. But if there is no pre-ordained duality of man and woman in creation, then neither is the family any longer a reality established by creation. Likewise, the child has lost the place he had occupied hitherto and the dignity pertaining to him.

To read the full text of the statement issued by the British Confraternity of Catholic Clergy, click here.