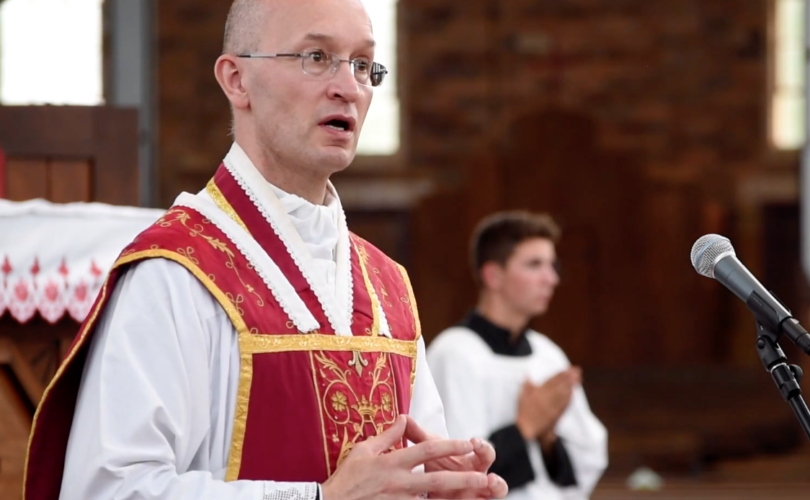 April 3, 2020 (LifeSiteNews) — Fr. Jurgen Wegner, District Superior of the Society of St. Pius X’s (SSPX) American district, has announced today that he is cancelling “most public Masses” offered by the SSPX in the United States.

In a public statement released this morning, Fr. Wegner, who is originally from Germany, says, “for as long as we could, we kept our public apostolate as normal as possible. Your priests have tried, in recent weeks, to assure Masses and confessions in unusual or difficult scenario.” But, he adds, “stay-at-home orders, restrictions to small groups, and obligatory social distancing make it impossible in almost all the places to serve our faithful and guarantee their health, even where we multiply the number of Masses.”

Citing the need to protect the laity, especially the elderly, as well as the priests and the “common good” of the Society, Fr. Wegner states that “prudence demands I cancel most public Masses.” We “must do what we can to protect them and cooperate with all legitimate authorities.”

The announcement does not mean SSPX priests will no longer be available to administer the sacraments, however. “Confession, Communion and Extreme Unction are still permitted, on a request-by-request basis, being prudent in all things,” the letter continues. “I also encourage priests where possible to keep our chapels open for private prayer, following the legal guidelines.”

The Society has posted on its website a list of the 103 chapels it services in the United States. That list, and whether or not Masses have been cancelled at those chapels, can be accessed by clicking here.

Fr. Wegner added that he has also encouraged priests to make more liberal use of Extreme Unction and that the laity should “never hesitate to call for guidance or to ask for priestly support, for Communion, confession…or special blessings.”

The SSPX is an international union of more than 600 priests. Founded in 1970 by French Archbishop Marcel Lefebvre, the group maintains that the crisis in the Church is a result of the Second Vatican Council’s embrace of a variety of “modernist errors.”

In recent weeks, the SSPX has come to be seen as a sort of life raft for Catholics seeking access to the sacraments. In the aftermath of the coronavirus outbreak, every diocese in the U.S. cancelled their public Masses. Some took the extreme measure of banning priests from hearing Confessions or even administering Last Rites.

Initially, the SSPX found creative ways to provide for the sacramental needs of the faithful during these trying times. In Michigan, an outdoor “parking lot” Mass was held on each of the past two Sundays. Several dozen Catholics who do not regularly attend the church showed up at the liturgies. In southern Wisconsin, an SSPX chapel held an outdoor Mass Sunday evening in addition to its normal two morning masses in order to ensure attendees remained under the state imposed limit of 50. In rural Virginia this past weekend, an invite-only outdoor Mass where laity remained in their cars took place. All Masses were done in accordance with “social distancing” and public health guidelines.

Despite the fact that Catholics can fulfill their Sunday obligation at SSPX chapels, validly and licitly confess their sins to, and validly and licitly get married (in some circumstances) by Society priests, Bishop Michael Burbidge of the Diocese of Arlington in Virginia made a public statement criticizing the group’s efforts.

“We have been notified that the Society of Saint Pius X, which is a schismatic sect and not in full communion with the Holy See, is holding Masses in Front Royal, VA. This group did not request permission for their gathering from the Diocese of Arlington,” his March 29 statement read.

In the U.K. SSPX churches have been closed since the government ordered all places of religious worship to close altogether, including for private prayer, as part of the nationwide lockdown declared by Prime Minister Boris Johnson on March 23.

SSPX Masses have been suspended in parts of Canada as well, though a Society chapel in Toronto offered Mass this past weekend. The priest, Father Dominique Boulet, informed LifeSite that he received “hundreds” of calls from Catholics wanting to attend a Latin Mass. When the Mass was over, police showed up and warned him he could be fined for possibly breaking the law.

The decision of the SSPX to follow in the footsteps of bishops across the United States comes days after a group of prominent lay Catholics issued a public letter titled “We Are An Easter People” calling on bishops “to do everything you can to make the sacraments more available to us” during the COVID-19 pandemic.

Moreover, it comes less than a week after the SSPX’s St. Thomas More priory in Florida issued a statement to Governor Ron DeSantis saying that it was “dangerous” for churches in the state to close. DeSantis ultimately deemed churches “essential,” but Miami Archbishop Thomas Wenski nevertheless told his priests not to offer Easter Masses, Confessions, or “plan any activity that would encourage people to leave their homes.”