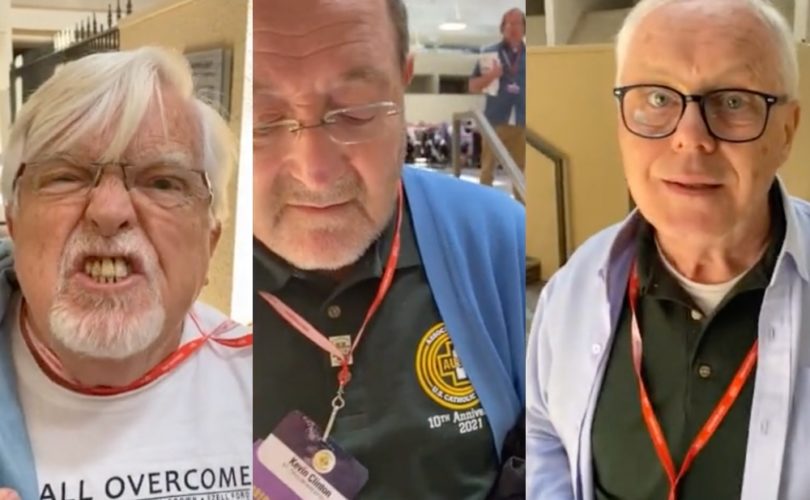 MINNEAPOLIS, Minnesota, June 22, 2021 (LifeSiteNews) – The 10th Annual Assembly of the dissident Association of U.S. Catholic Priests is currently underway in Minneapolis, and when reporting on the event LifeSiteNews faced encounters with angry priests who accused LifeSite’s reporter of lacking charity for questioning the priests about their dissent from Church teachings.

The Association of U.S. Catholic Priests (AUSCP) 2021 assembly is headlined by Father Michael Joncas, Bishop William Wack of Pensacola-Tallahassee, and Santa Fe’s Archbishop John Wester. The group is renowned for its dissident views, which, as the Lepanto Institute notes, include support of women’s “ordination” to the priesthood, its alliance with sexually deviant organizations and agendas, its work with an international network of heretical organizations, and its call for “priestless parishes.”

While on the ground in Minneapolis, LifeSiteNews videographer Jim Hale was met with angered responses by priests dressed in street clothes at the conference venue. Hale recorded a brief encounter with some of the aging left-wing priests that featured one attempting to stop LifeSite from filming in the public venue, claiming that “you’re not allowed to take photos of our private meeting.”

“We are Catholic. We’re promoting charity,” objected pro-LGBT Father Peter Daly, when LifeSite’s Jim Hale questioned him about the organization’s support for issues contrary to Church teaching. Daly is a retired priest of the Archdiocese of Washington.

Also seen in the video is Father Kevin Clinton, a retired priest of the Archdiocese of St. Paul and Minneapolis.

Hale engaged a third priest, who approached with a flask apparently full of coffee, warning the cleric that “all your mortal souls are at stake here.”

Hale pressed the left-wing priests, “What does the Bible say about homosexuality?” However, the coffee-wielding priest simply repeated the phrase “love one another as I loved you,” while seeming to film Hale with his mobile phone, and hiding his name tag from Hale’s camera.

None of the three priests on video were in any form of clerical attire. However, Fr. Daly returned to Hale, protesting that “we will pray for you that you learn a little charity and conscience.”

“I believe that the Church teaches charity, it teaches love,” continued the angry-seeming cleric, while out of camera shot, another can be heard adding “may Almighty God have mercy on you.”

A fourth man walked away shouting that “the police are on their way,” after Hale reminded the priests that the Bishop of Toledo, Daniel Thomas, denounced the group.

Indeed, in May 2020, Bishop Thomas re-affirmed the excommunication of Beverley Bingle, who served as an official representative of the AUSCP, due to her attempt to become “ordained” and administer the sacraments.

Thomas further warned “all of the clergy, consecrated religious and lay faithful in the Diocese of Toledo,” that due to Bingle’s role, any affiliation with the AUSCP “may be a source of grave concern due to the confusion and scandal they have caused.”

As part of the AUSCP meeting this week, the assembled priests will discuss the “Pastoral directions for our U.S. church going forward.”