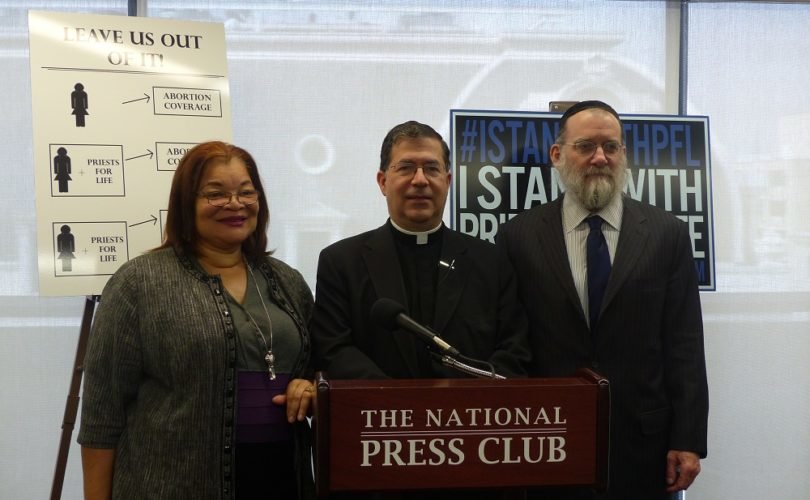 WASHINGTON, D.C., November 18, 2015 (LifeSiteNews) – Father Frank Pavone, Priests for Life's national director, said today that the Supreme Court should overturn the Obama administration's contraceptive mandate because “the role of a judge is to make judgments about law, not about religious beliefs.”

“It is beyond the authority of the courts to tell Priests for Life whether its beliefs are accurate or reasonable or overly scrupulous,” Pavone said, speaking at a Priests for Life press conference at the Washington, D.C.-based National Press Club about his group's lawsuit against the Obama administration's contraceptive, sterilization, and abortifacient mandate.

Priests for Life is one of seven groups whose objections to the mandate will be considered by the U.S. Supreme Court next year. The other groups are Little Sisters of the Poor; Archbishop Donald Wuerl of Washington, D.C.; Bishop David Zubik of Pittsburgh; East Texas Baptist University; Southern Nazarene University; and Geneva College.

“A nation that says, 'Violate your faith or pay a price' is not protecting religious freedom,” said Pavone.

The Obama administration has argued publicly and in court that Priests for Life and other groups are not being forced to participate in the mandate because they are allowed to sign paperwork that would put the burden of coverage on an insurance company, not the religious groups directly. However, the religious groups say they would then be responsible for participating in a process that violates their sincerely held religious beliefs.

Courts have split on the case, which is why the Supreme Court is hearing arguments. Each of the objecting organizations faces a $100 fine per day per employee for not providing the mandated coverage.

Speaking after Pavone, Priests for Life's director of African-American outreach, Alveda King, said that “the HHS Mandate infringes upon my rights as a woman, my religious freedom, my civil rights, and my well-being.”

Pavone likewise said if the government's argument prevails, it could extend the mandate to require coverage of abortion on demand and euthanasia as necessary cost-saving efforts. “It is a dangerous argument – dangerous to human rights, dangerous to conscience, and dangerous to … the country,” he said.

Priests for Life Executive Director Janet Morana said that opposing the mandate is both a personal issue and one that she believes benefits women. Citing the harms of the drug Yaz, Morana said that “there have been over 6,000 lawsuits by women who have been either physically damaged or families … of women who were killed by taking Yaz/Yasmin.”

Pointing to the $1.4 billion in settlements by pharmaceutical giant Bayer related to the Yaz/Yasmin, Morana said that “as the person who has to sign off on providing this coverage … it' s morally objectionable.” Additionally, “why would I want the women under our employment to be physically damaged, knowing the facts I know?”

Priests for Life attorney David Yerushalmi, of the American Freedom Law Center, told reporters that “judges, as secular arbiters of the law, have no business trying to decide if signing a form or any other activity that triggers contraception, abortifacients, etc. would be a substantial burden.”

Yerushalmi said that courts that have decided against those on the side of his client “are simply flying in the face of court precedent that goes back decades.”

In lower courts, some judges have said the plaintiffs' argument is invalid because insurance companies are already required to provide coverage – and thus, Priests for Life, Little Sisters of the Poor, and other groups are not putting a greater burden on the companies.

Asked about this argument by LifeSiteNews, Yerushalmi said “under the mandate … Priests for Life does something. They have to fill out a form and trigger that coverage. That triggering is … a participation in, and a facilitation of, the objectionable content.”

Yerushalmi also said “all sorts of exemptions … apply” to the mandate, and that “nothing stops the government from offering the coverage” directly to women, if the government believes mandated coverage of contraceptives and abortifacients is a compelling interest.

In addition to opposing the mandate as an organization, Morana, Pavone, and King all opposed the mandate as individuals because they would have to fill out forms for coverage with which they disagree – something Morana said she would not do.