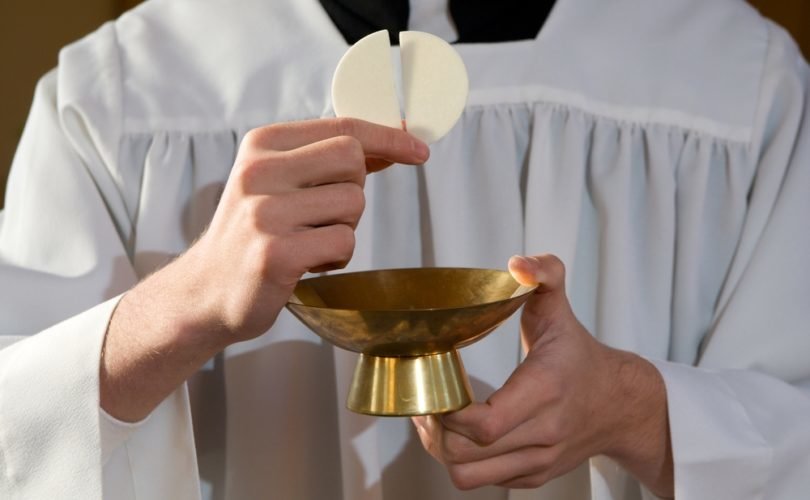 Mgr. Basil Loftus, columnist for Britain’s Catholic Times, says he’s concerned about “single-issue fanatics” who are “exercised about sex and marriage, about maniples and Communion-on-the-tongue, about celibacy of the clergy, about contraception, or about the right to carry loaded firearms in America while attending Mass,” calling them “fanatical partisans.”

Loftus warns of such people: “their extremist and sometimes violent propensities make them, in all but name, terrorists.”

Among such “terrorists” Loftus includes any priest “who excludes females from the role of altar-servers, or refuses to wash their feet on Maundy Thursday, or who turns away from Communion a politician who voted not to criminalise abortion,” as well as “a bishop who refuses to back Pope Francis' plea for discernment in the matter of Communion for the divorced and remarried, and for those who live in non-conventional domestic situations,” concluding that “all of them are crypto-terrorists.”

Loftus’ ire is particularly reserved for the “purportedly pro-life antics of men such as Archbishop Naumann, the recently elected head of the American bishops' 'pro-life committee',” claiming that he would like to “erect marquees in papal colours in front of every abortion clinic, and staff them with a 24-hour guard of what Francis calls ‘prune-faced’ people reciting the rosary round the clock . . .”

Joseph Shaw, an Oxford philosophy professor and chairman of the Latin Mass Society of England, has been tracking Loftus’ writings for several years and has sought to alert the bishops to his bitter attacks on orthodox Catholics. He transcribed Loftus’ latest column, which only appears in print, in a recent blog post.

“Mgr. Loftus has for many years expressed the most bitter hostility to bishops and cardinals in England and Scotland, in Rome, and elsewhere, for upholding the Church's Faith and discipline, and sometimes for the most trivial things which happen to annoy him,” Shaw told LifeSiteNews. “In doing so he routinely twists their words, misrepresents their actions, or simply attributes to them attitudes and failings of his own invention. He is a living contradiction of the respect due to Catholic bishops, and their right to a good name.”

“In attacking Archbishop Naumann he has taken his invective to a new level. Having claimed, on the basis of no evidence at all, that the Archbishop combines concern for the pro-life cause with a lack of human charity, he labels him, and those like him, 'terrorists.' The shocking nature of the accusation is matched by its absurdity and lack of grounds,” said Shaw.

“It is a scandal that he was allowed to publish this libel in a newspaper which calls itself 'Catholic' and is sold in Catholic churches all over the United Kingdom,” he said.

Shaw has composed a dossier of numerous statements made by Loftus that insult various Catholic prelates and question articles of the Catholic faith, such as the historicity of the resurrection of Christ from the dead and original sin. Although he has sent the dossier to several bishops, Loftus has been allowed to continue writing his column for the Catholic Times.

Contact information (please be polite and respectful in all correspondence):

Diocese of Salford (which publishes the Catholic Times), whose bishop is John Arnold:
[email protected]
Phone: 0161 817 2222

Diocese of Leeds (where Mgr Basil Loftus is incardinated), whose bishop is Marcus Stock:
[email protected]

Diocese of Aberdeen in Scotland (where Mgr. Basil Loftus lives) whose bishop is Hugh Gilbert:
https://www.rcda.scot/contact/bishops-office