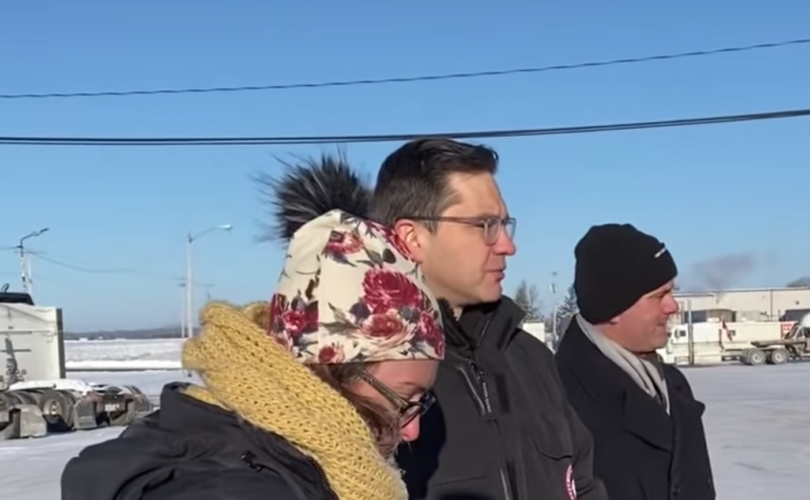 OTTAWA (LifeSiteNews) – A Member of Parliament belonging to the Conservative Party of Canada has told Canada’s Prime Minister Justin Trudeau that his “power trip is over,” and that all COVID measures should be removed at once.

“Do not allow your spite towards the trucker protest to stand in the way of doing the right thing. This is not about saving face. Your pride and ego come after the public interest,” wrote Pierre Poilievre in an open letter dated Thursday.

My open letter calling for the Prime Minister to give Canadians back control of their lives.

“Prime Minister, the power trip is over. Give people back control of their lives. You are their servant and not their master. Let us commit to making Canada the freest country in the world.”

In his letter, Poilievre wrote that Trudeau was dividing Canadians by targeting those who have chosen to not be jabbed.

“You have divided the country. You have told Canadians to fear their neighbours. You have called decent people horrible names. You have destroyed people’s livelihoods on the basis of their personal health choices. These actions are directly to blame for the protests in Ottawa and across Canada,” the MP for the Carleton riding wrote.

Poilievre asked Trudeau to listen “to the experts” and declared that, by “following the science, you can allow people to get their lives back.”

“The rest of the world is moving forward while you have been moving backwards. Jurisdictions around the world are rapidly eliminating restrictions on the freedoms of their people,” wrote Poilievre.

“It is time for all of Canada, not just a select few provinces, to end the use of vaccine passports and other COVID restrictions.”

Poilievre called on Trudeau to take three steps, the first being to “[e]nd all federal vaccine mandates.”

“Allow unvaccinated public servants their jobs back and compensate them for the earnings they’ve lost since you suspended them without pay for their personal medical decisions,” wrote Poilievre.

The Conservative (CPC) MP then said that Trudeau must end the “Canadian vaccine mandates on truckers crossing borders and pick up the phone and call President Joe Biden to demand he do likewise.”

He also said Trudeau should encourage provinces to end “mandates” and “[s]tate clearly that there will be no taxes on the unvaccinated.”

On February 5, just days after the party voted out Erin O’Toole as leader, Poilievre announced he will be running for the office of leader of the CPC.

Last week, he launched a petition which called for all COVID restrictions to be removed.

Despite Poilievre’s advocacy for freedom, when it comes to issues such as abortion, he has a  voting record disappointing to social conservatives. Last year, for example, he voted against a pro-life bill that would have banned sex-selective abortion.

Since that time, Trudeau has denounced the freedom convoy and has refused to meet with them.

This past Friday, he even threatened “real consequences with respect to their [truckers’] licenses to their jobs.”

Today, rumors are swirling that Trudeau will invoke the never used Emergencies Act to deal with the trucker protesters, both outside the House of Parliament in Ottawa and in the multiple blockades of important U.S.-Canada border crossings.

The last time similar legalization was enacted was in 1970 when his father Pierre Elliott Trudeau, Canada’s prime minister from 1968 to 1979 and from 1980 to 1984, invoked the War Measures Act as a response to political violence in the province of Quebec. The War Measures Act was repealed in 1988.

Today, the CPC will force a vote on removing all federal COVID-19 mandates as well as restrictions, with the full support of both Bergen and Poilievre.

Both Alberta and Saskatchewan have already ended vaccine passports and other COVID restrictions, with both Ontario and Manitoba announcing they will end them soon.