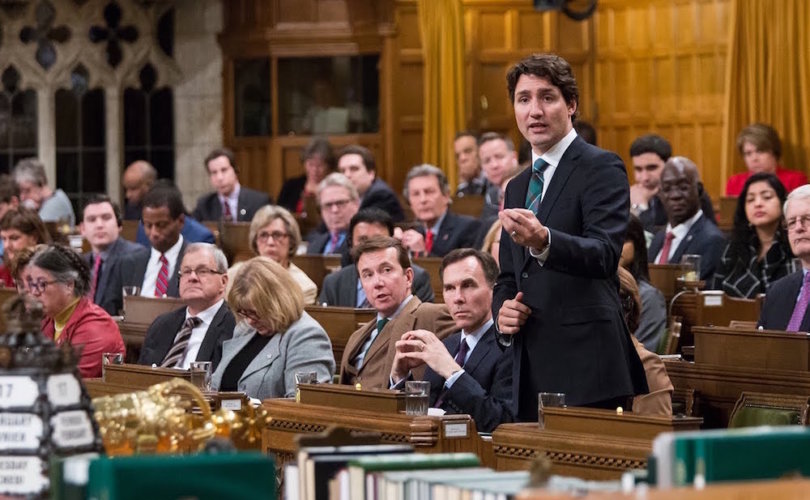 The Liberals and New Democrats teamed up to overwhelmingly defeat a Conservative motion supporting doctors and nurses.

OTTAWA, May 19, 2016 (LifeSiteNews) – The Liberals and New Democrats combined to defeat a Conservative-supported motion protecting the conscience rights of doctors and other health professionals who refuse to participate in euthanasia and assisted suicide. Hope now centres on the Senate for amendments to the government’s proposed law for protection for medical professions and patients.

On Tuesday the House of Commons divided almost entirely on party lines to defeat a motion from Tory MP Arnold Viersen defending conscience rights by a 214 to 96 vote margin. Every Conservative who voted supported the motion and every Bloc Quebecois and Liberal MP who voted, including Prime Minister Justin Trudeau, opposed it. Five NDP members supported it as did Green MP and leader Elizabeth May.

The motion was a way to put the government on the record either supporting or opposing conscience rights for doctors and nurses who refuse to perform or abet patients who want to die. The government had avoided the issue with its proposed assisted dying bill, C-14, which said nothing about conscience rights on the grounds that the regulation of health professionals is a provincial matter.

Without calling for any amendment to Bill C-14, Viersen’s motion declared that “It is in the public interest to protect the freedom of conscience of a medical practitioner, nurse practitioner, pharmacist or any other health care professional who objects to take part, directly or indirectly, in the provision of medical assistance in dying.”

MP Viersen explained, “The Liberals continue to emphasize that nothing in Bill C-14 can compel a healthcare provider to provide medical assistance in dying, but any province or employer could still compel healthcare professionals against their conscience rights.”

Bill C-14 is an amendment to the Criminal Code, setting out the conditions that must be met by health professionals putting patients to death or assisting them to commit suicide, without committing a crime. It was necessitated by the Supreme Court’s decision in the Carter case throwing out the blanket Criminal Code provision against either forms of homicide, with enforcement of the decision delayed first till February and now till June.

While C-14 was initially silent on conscience rights, in committee an amendment was added declaring that nothing in the bill could be used to compel health professionals to act against their consciences. The House has yet to vote on this and other amendments.

Larry Worthen, head of the Christian Medical and Dental Society of Canada, told LifeSiteNews that the amendment “was a move in the right direction,” but not nearly enough to protect doctors and other health professionals from discrimination or discipline.

“We really are hoping that what we want will be added in the Senate,” said Worthen. The Senate’s Justice Committee has just issued its report on the issue and on Bill C-14 indicating it wants stronger protections not only for doctors, but for patients. But the bill must first pass in the Commons before going to the Senate.

The Senate report calls for amendment declaring that “No medical practitioner, nurse practitioner, pharmacist or other healthcare institution care provider, or any such institution, shall be deprived of any benefit, or be subject to any obligation or sanction, under any law of the Parliament of Canada.”

While it recommended making it easier for a person to request assisted dying in advance of an anticipated cognitively disabling condition, it also called for greater safeguards against minors or the mentally ill getting such aid, and measures to prevent those who might benefit financially having a hand in requesting the assistance.

Worthen was joined by Dr. Catherine Ferrier, of Quebec’s Living with Dignity group, in warning that provincial governments, institutions and professional regulators such as colleges of physicians and surgeons could all violate health workers’ freedom of conscience by requiring them to help patients die or refer patients to other doctors who would help them.

“A palliative care centre could make it a condition of employment,” said Worthen. “The Ontario College of Physicians and Surgeons made it a requirement last year that doctors must provide ‘effective referrals.’”

Ferrier said the Quebec government already requires doctors to pass on requests for assisted suicide to a committee that will find them a doctor. “The way it worked in the past,” she told LifeSiteNews, “was that a patient who just discovers he has terminal cancer might say, ‘I want to die now.’ And we would respond, ‘It’s against the law for us to do that. Let’s talk about what else we can do to help you.’ Then the palliative care providers deal with the patient’s pain, he talks with his family, he starts dealing with all the important issues of his life, and he realizes he is glad he is still alive.”

But now in Quebec, said Dr. Ferrier, “When we say, ‘We can help you with the pain,’ the patient says, ‘I don’t want any help. I just want to die right now.’” Dr. Ferrier said she knew of several doctors considering leaving Canada or retiring rather than participate in the death of their patients.

CMDSC’s Worthen called on all those supporting conscience rights to use the organization’s website, www.canadiansforconscience.ca, to register their views with members of the Senate.

Watch a video of the vote on Viersen's motion: