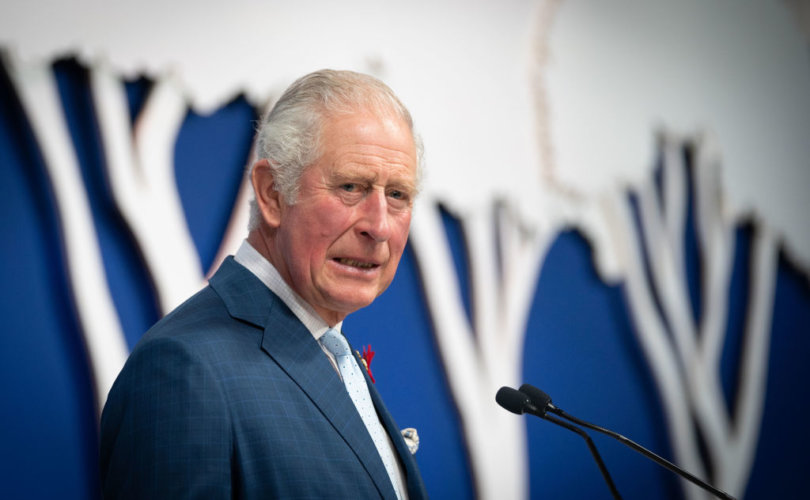 The British royal made the comments at the launch of the United Nations’ COP26 climate change conference, which is being held in Glasgow, Scotland, this year after it was canceled in 2020 due to measures taken in response to the COVID-19 pandemic.

In his Monday speech, Prince Charles said, “We need a vast military-style campaign to marshal the strength of the global private sector,” noting that the private sector has “trillions at its disposal, far beyond global GDP, and, with the greatest respect, beyond even the governments of the world’s leaders.”

“It offers the only real prospect of achieving fundamental economic transition,” he added.

Prince Charles’ comments urging “military” action to combat climate change are not new. The heir to the British throne has long encouraged a “warlike” response to changing carbon levels and global temperatures, and spoke of impending climate catastrophe if no action is taken.

Last year, Charles warned, “[a]t this late stage I can see no other way forward but to call for a Marshall-like plan for nature, people and the planet,” referring to the sweeping post-war American initiative to rebuild Europe after the end of the Second World War.

‘At this late stage I can see no other way forward but to call for a Marshall-like plan for nature, people and planet,’ Prince Charles said in a video, for the launch of a week of virtual climate-change events in New York #ClimateWeek https://t.co/T02GqWae3d pic.twitter.com/5xbzYIvVfR

“We must now put ourselves on a warlike footing, approaching our action from the perspective of a military-style campaign,” he said, arguing that human activity has pushed the earth “beyond its planetary boundaries,” while those in positions of power have “decried, denigrated and denied” the problem, the Guardian reported.

Global leaders pushing for concrete actions to address climate change have openly advocated for using the destabilizing impact of the COVID-19 pandemic response as a platform from which to launch a new system of global economic and social governance.

“[I]f we do not take action now against climate change, the damage could be even greater and more lasting than the effects of the pandemic,” the International Monetary Fund (IMF) stated in an article ahead of the COP26 conference.

“Decisions made now are crucial in shaping the future of people and the planet. We must not go back to the old normal; it’s imperative to build back better through sustainable, inclusive, and resilient growth,” the IMF said.

Such stratagems align with the World Economic Forum’s goals of achieving a “Great Reset,” allowing world governments to tap into private sector capital at a massive scale in the interest of “revamp[ing] all aspects of our societies and economies, from education to social contracts and working conditions.”

“There are many reasons to pursue a Great Reset,” said WEF head Klaus Schwab last year, “but the most urgent is COVID-19.”

According to Schwab, massive government spending programs enacted to alleviate the damage caused by harsh lockdowns, restrictions, and mandates should be used “to create a new [system] that is more resilient, equitable, and sustainable in the long run,” including “building ‘green’ urban infrastructure and creating incentives for industries to improve their track record on environmental, social, and governance (ESG) metrics.”

“Clearly, the will to build a better society does exist,” the WEF head said. “We must use it to secure the Great Reset that we so badly need. That will require stronger and more effective governments, though this does not imply an ideological push for bigger ones. And it will demand private-sector engagement every step of the way.”

The stated goals of global leaders to wield the financial power of the private sector to stave off impending climate catastrophe come as COP26 participants themselves have come under fire for seemingly contradicting their own dire admonitions by arriving at the 2021 global climate conference in massively polluting private jets.

Scotland’s Daily Record noted that over “400 private jets” were used to transport the more than 1,000 global leaders, staff and businessmen to the conference. The Record remarked that the emissions from 400 jets “produce more global warming gas than 1600 Scots burn through in a year.”

Private jets flying to COP26 will blast more CO2 than Scots pump out in a year 🤷🏻‍♀️ https://t.co/sSnYFDYciA

The Daily Mail also took a shot at the COP26 participants, producing a graphic detailing the flight plans of 52 of the planes transporting politicians and businessmen, some of whom “will be urging others to cut down on air travel and eat less meat.”

“Apparently it is fine for billionaires to fly in on their own planes on routes already served by commercial airlines,” the Daily Mail commented.

Likewise, prominent Brexit leader, Trump ally, and former Member of the European Parliament Nigel Farage declared, “Every world leader or dignitary that arrives to @COP26 by private jet is an eco-hypocrite. Fact.”

Every world leader or dignitary that arrives to @COP26 by private jet is an eco-hypocrite. Fact.

In the 1970s, scientists, climate activists, and public figures worried a man-made “ice age” would threaten millions of lives, with International Wildlife predicting in July 1975 that the threat “stood alongside nuclear war as a likely source of wholesale death and misery.”

“According to some climatologists, within a lifetime we might be living in the next ice age,” warned actor and director Leonard Nimoy in 1978.

In 2009, Prince Charles told business leaders during a South America tour that there were only “100 months to act” before the effects of “global warming” became irreversible, a milestone now passed some four years ago.

In 2013, the same year former U.S. Vice President Al Gore predicted that sea ice in the Arctic could disappear as a result of manmade “global warming,” the Danish Meteorological Institute reported that Arctic ice had just reached a two year-high.