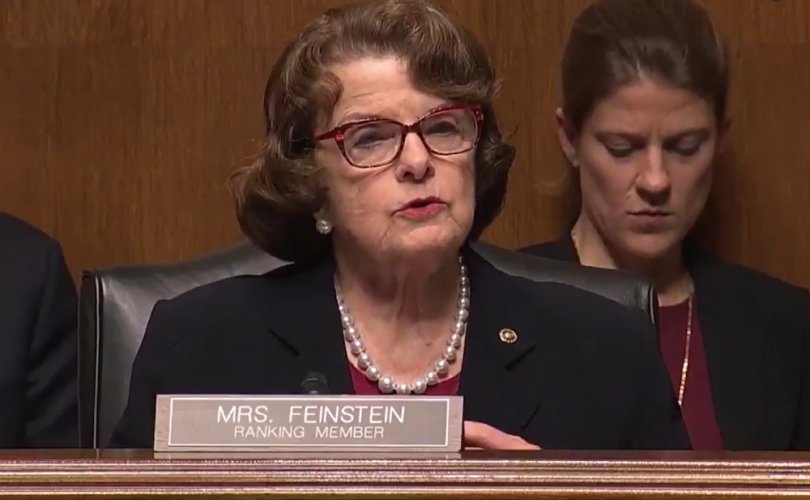 September 12, 2017 (LifeSiteNews) – The President of Princeton University asked the Democratic senator who aggressively questioned a Trump judicial nominee about her Catholic faith to cease from “interrogating” nominees about their religion.

Princeton President Christopher L. Eisgruber wrote to Sen. Diane Feinstein, D-California, and her colleagues on the Senate Judiciary Committee explaining that it was unconstitutional to force Amy Coney Barrett to explain her religious beliefs as part of her vetting to be a judge on the U.S. 7th Circuit Court of Appeals.

Barrett is a University of Notre Dame law professor.

“When you read your speeches, the conclusion one draws is that the dogma lives loudly within you,” Feinstein told Barrett during her confirmation hearing. “And that's of concern when you come to big issues that large numbers of people have fought for, for years in this country.”

Eisgruber's letter urged the Committee to “refrain from interrogating nominees about the religious or spiritual foundations of their jurisprudential views.”

“Article VI of the United States Constitution provides explicitly that 'no religious test shall ever be required as a qualification to any office or public trust under the United States,'” Eisgruber noted.

“The Supreme Court’s unanimous decision in Torcaso v. Watkins (1961), holding that the First and Fourteenth Amendments render this principle applicable to state offices and that it protects non-believers along with believers of all kinds, is among the greatest landmarks in America’s jurisprudence of religious freedom,” he continued.

A person's religion is “constitutionally irrelevant to the qualifications for a federal judgeship,” wrote Eisgruber, and “the questions directed to Professor Barrett about her faith were not consistent with the principle set forth in the Constitution’s 'no religious test' clause.”

It's possible to ask judicial nominees about their judicial philosophies without bringing up their religious beliefs, he wrote, “and Article VI insists that the Senate observe that restriction.”

Barrett's Catholicism came under scrutiny partly because she wrote an article about ethical dilemnas for Catholic judges who oppose the death penalty in certain cases.

“I have read that article, and I believe that the views expressed in it are fully consistent with a judge’s obligation to uphold the law and the Constitution,” wrote Eisgruber. “As a university president committed to free speech, academic freedom, and religious pluralism, I must add that, in my view, Professor Barrett’s qualifications become stronger by virtue of her willingness to write candidly and intelligently about difficult and sensitive ethical questions.”

Universities, the judiciary, and “our country will be the poorer if the Senate prefers nominees who remain silent on such topics,” he continued. “I am deeply concerned by the harsh and often unfair criticisms that are now routinely leveled from both sides of the political spectrum against distinguished judicial nominees who would serve this country honorably and well. On the basis of her accomplishments and scholarly writing, I believe that Professor Barrett is in that category.”

“Every Senator and every American should cherish and safeguard vigorously” the constitutional protections against religious discrimination against public officials.

Father John I. Jenkins, C.S.C., the President of Notre Dame, also wrote Feinstein to express “deep concern at your line of questioning.”

“I am not a legal scholar, but I have heard no one seriously challenge her impeccable legal credentials,” wrote Jenkins. “I am one in whose heart 'dogma lives loudly,' as it has for centuries in the lives of many Americans, some of whom have given their lives in service to this nation. Indeed, it lived loudly in the hearts of those who founded our nation as one where citizens could practice their faith freely and without apology.”

Jenkins noted Barrett said she'd follow legal precedent and “in rare cases in which her conscience would not allow her to do so, she would recuse herself.”

“It is chilling to hear from a United States Senator that this might now disqualify someone from service as a federal judge,” he concluded. “I ask you and your colleagues to respect those in whom 'dogma lives loudly' — which is a condition we call faith. For the attempt to live such faith while one upholds the law should command respect, not evoke concern.”