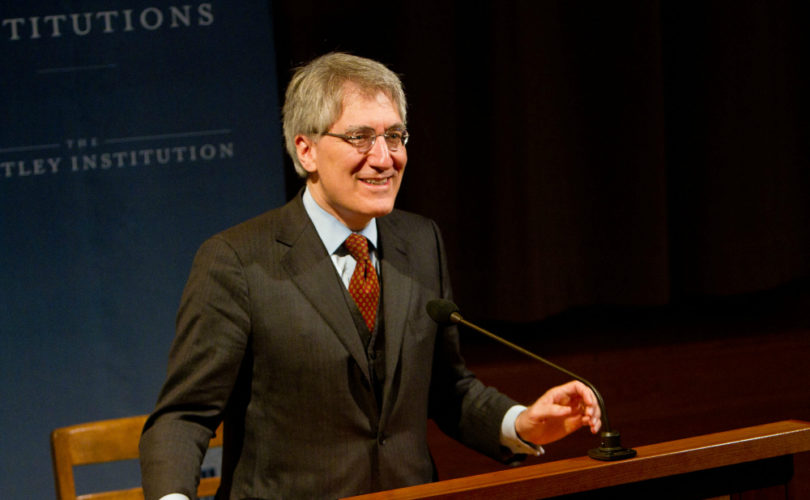 October 13, 2017 (LifeSiteNews) — Princeton professor and Catholic heavyweight Robert P. George said he has solved the puzzle of why Jesuit priest and Vatican adviser James Martin speaks positively about homosexual partnerships while insisting to his critics that he does not reject any teachings of the Catholic Church.

George, in a recent article in The Public Discourse, related how he himself was once publicly rebuked by Martin after describing the priest as “rejecting the Church’s moral teaching” on sex and marriage.

“He replied in a tweet saying that I was wrong about his views and telling me, with some measure of indignation, ‘Stop.’ Some of his supporters took things a step further, accusing me of ‘lying’ and calumny,” related George.

George said he then tweeted Martin back, asking if this meant that the Jesuit priest affirmed the Church’s teaching that “marriage is the conjugal union of husband and wife, and that sexual acts of any type outside the marital bond are immoral?”

“In response, I did not get a ‘yes.’ Or a ‘no.’ Fr. Martin fell silent, though we had just been exchanging tweets,” he related.

The Princeton prof said Martin’s standard response when asked if he holds what the Church teachings on sex and marriage is usually silence.

“He simply refuses to say what the Church in fact says, namely, that though we must love those who experience and even act on same-sex desires, homosexual acts are wrong and sinful — morally and spiritually harmful to those engaging in them,” said George.

While George said that it is “puzzling” that Martin claims to not reject Catholic sexual teaching, he does not think the Jesuit priest is lying, as is claimed by what George called “conservative Catholic critics.”

Fr. Martin, they say, is a liar — a “perfidious priest.” He is simply lying, they insist, when he professes full support for the Church’s teachings. They point, for example, to his expression of “reverence” for same-sex sexual partnerships; to his comparison of conjugal-marriage supporters to racists; to his professed hope that one audience member would be free to kiss his “soon-to-be husband” at Mass; and to his proposal that the Church replace its teaching that same-sex desires are “objectively disordered” with the idea that they are “differently ordered.”

George said the solution to the puzzle is that when Fr. Martin says he does not reject Church teaching he “sincerely denies that the Church really does teach the immorality of homosexual conduct.”

The professor quoted an interview that Fr. Martin gave to Brandon Ambrosino of Villanova University on August 29 to make the case that the Jesuit priest holds that Church’s sexual teachings are not authoritative.

In the interview, Fr. Martin argued that for a teaching in the Church to be “authoritative,” it has to be first “received” by all the people.

“For a teaching to be really authoritative, it is expected that it will be received by the People of God, by the faithful,” Martin said.

Commented George: “Well, there you have it! When Fr. Martin says he supports the Church’s teaching, he isn’t saying that he supports what most people mean by ‘the Church’s teaching,’ including what the popes and bishops (or ‘institutional Church’) have for centuries taught on marriage and sexuality in what they themselves see as exercises of their apostolic authority.”

The Princeton prof said Martin’s understanding of ‘Church teaching’ likely means that he does not include in that body of teaching the “propositions that homosexual conduct is immoral or even, perhaps, that marriage is exclusively the union of man and woman.”

“Why not? Because, he says, ‘the community to which it was largely directed’ has not ‘received’ this teaching. … Or, in plain English, the Church’s teaching on sexuality isn’t authentic teaching because those who’ve rejected that teaching have, well, rejected it.”

“He doesn’t reject what he sincerely regards as the Church’s real teachings — teachings ‘received’ by more than a ‘small percentage’ of those to whom they are ‘largely directed.’ No, he only rejects statements that he honestly thinks aren’t fully Church teachings, even though they’re presumed to be just that, by foes and friends alike of the Church and its moral vision,” he said.

George said other scholars, such as Greg Brown, have already set forth what he called the “damning flaws” in Martin’s understanding of what counts as an authoritative teaching of the Church.

“My point here is merely to show that it is Fr. Martin’s understanding — his misunderstanding — of what counts as the Church’s teaching that solves the puzzle his own teaching presents,” he said.

Fr. Martin, editor-at-large for Jesuit-run America Magazine, was appointed by Pope Francis earlier this year as a consultant for the Vatican’s communications operations.

His controversial book “Building a Bridge” has been viewed by critics and supporters alike as an effort to normalize homosexuality within the Catholic Church through the strategy “welcoming” and “dialogue.”

Famed moral theologian Janet Smith criticized Martin earlier this month for his “slick dissent” from Church teaching on sexuality “and its pernicious influence,” saying  his “scandalous” interpretation of Catholic teaching could jeopardize the salvation of the people who hear his message.

Cardinal Robert Sarah rebuked Martin in the Wall Street Journal in August, calling him “one of the most outspoken critics of the church’s message with regard to sexuality.” He said that missing from Martin’s teaching is the “harm of sin” caused to those who engage in homosexual behaviors.

He has also been publicly criticized by Illinois Bishop Thomas Paprocki and Philadelphia Archbishop Charles Chaput for misrepresenting the Church’s teaching on homosexuality.

Even non-Catholics have criticized Martin. Evangelical Bible scholar Robert Gagnon said in August that the Jesuit priest has “no business being in a position of responsibility in the Catholic Church” due to his “destruction of the historic Catholic (and general Christian, scriptural) position on a male-female foundation for sexual ethics.”