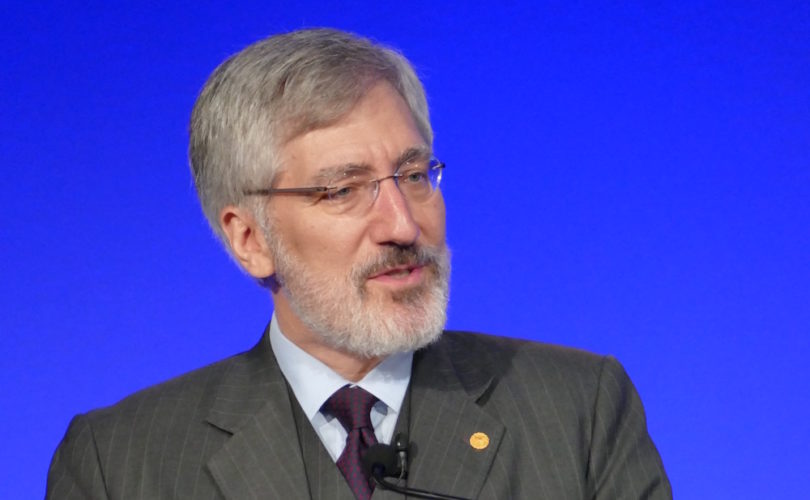 ORLANDO, February 4, 2016 (LifeSiteNews) — “It is no longer easy to be a faithful Christian, a good Catholic, an authentic witness to the truths of the Gospel,” said Princeton Professor Robert George to a large crowd at the Legatus Summit in Orlando, Florida last weekend. Professor George added that people can still safely identify as “Catholic” as long as they don’t believe, or will at least be completely silent about, “what the Church teaches on issues such as marriage and sexual morality and the sanctity of human life.”

He said “the guardians of those norms of cultural orthodoxy that we have come to call ‘political correctness,’” will still grant a comfort to a Catholic ashamed of the Gospel, “or who is willing to act publicly as if he or she were ashamed.”

The Princeton professor, who has been a leader in the fight for life and marriage, reminded his audience of Christ’s words: “If anyone wants to be my disciple, let him take up his cross and follow me.” “We American Catholics, having become comfortable, had forgotten, or ignored, that timeless Gospel truth. There will be no ignoring it now,” he remarked.

Are we “prepared to give public witness to the massively politically incorrect truths of the Gospel, truths that the mandarins of an elite culture shaped by the dogmas of expressive individualism and me-generation liberalism do not wish to hear spoken?” he asked.

For Catholics, and Evangelicals in America, he said, “it is now Good Friday.”  To a rousing standing ovation Professor George concluded:

The memory of Jesus’s triumphal entry into Jerusalem has faded.  Yes, he had been greeted—and not long ago—by throngs of people waving palm branches and shouting ‘Hosanna to the Son of David.’  He rode into the Jerusalem of Europe and the Jerusalem of the Americas and was proclaimed Lord and King.  But all that is now in the past.  Friday has come. The love affair with Jesus and his Gospel and his Church is over.

Fearing to place in jeopardy the wealth we have piled up, the businesses we have built, the professional and social standing we have earned, the security and tranquility we enjoy, the opportunities for worldly advancement we cherish, the connections we have cultivated, the relationships we treasure, will we silently acquiesce to the destruction of innocent human lives or the demolition of marriage? Will we seek to ‘fit in,’ to be accepted, to live comfortably in the new Babylon? If so, our silence will speak.  Its words will be the words of Peter, warming himself by the fire:  ‘Jesus the Nazorean? I tell you, I do not know the man.’

The saving message of the Gospel of Jesus Christ includes, integrally, the teachings of His church on the profound and inherent dignity of the human person and the nature of marriage as a conjugal bond—a one-flesh union….

The question of faith and fidelity that is put to us today is not in the form it was put to Peter—“surely you are you this man’s disciple”—it is, rather, do you stand for the sanctity of human life and the dignity of marriage as the union of husband and wife?  These teachings are not the whole Gospel—Christianity requires much more than their affirmation.  But they are integral to the Gospel—they are not optional or dispensable.  To be an authentic witness to the Gospel is to proclaim these truths among the rest. The Gospel is, as St. John Paul the Great said, a Gospel of Life.  And it is a Gospel of family life, too.  And it is these integral dimensions of the Gospel that powerful cultural forces and currents today demand that we deny or suppress.

One day we will give an account of all we have done and failed to do. …

One thing alone will matter: let me say this with maximum clarity—whether we stood up for the truth, speaking it out loud and in public, bearing the costs of discipleship that are inevitably imposed on faithful witnesses to truth by cultures that turn away from God and his law. Or were we ashamed of the Gospel?

If we deny truths of the Gospel, we really are like Peter, avowing that “I do not know the man.”  If we go silent about them, we really are like the other apostles, fleeing in fear. But when we proclaim the truths of the Gospel, we really do stand at the foot of the cross with Mary the Mother of Jesus and John the disciple whom Jesus loved. We show by our faithfulness that we are not ashamed of the Gospel. We prove that we are truly Jesus’s disciples, willing to take up his cross and follow him—even to Calvary.

But lest we fail the test, as perhaps many will do, let us remember that Easter is coming.  Jesus will vanquish sin and death. We will experience fear, just as the apostles did—that is inevitable. Like Jesus himself in Gethsemane, we would prefer not to drink this cup.  We would much rather be acceptable Christians, comfortable Catholics. But our trust in him, our hope in his resurrection, our faith in the sovereignty of his heavenly Father can conquer fear.  By the grace of Almighty God, Easter is indeed coming. Do not be ashamed of the Gospel.  Never be ashamed of the Gospel.

Professor George holds Princeton's celebrated McCormick Chair in Jurisprudence and is the founding director of the James Madison Program in American Ideals and Institutions. He is chairman of the United States Commission on International Religious Freedom (USCIRF). He has served on the President’s Council on Bioethics and as a presidential appointee to the United States Commission on Civil Rights. He has also served on UNESCO’s World Commission on the Ethics of Scientific Knowledge and Technology (COMEST), of which he continues to be a corresponding member. He is a former Judicial Fellow at the Supreme Court of the United States. A graduate of Swarthmore College and Harvard Law School, he also received a master’s degree in theology from Harvard and a doctorate in philosophy of law from Oxford University.