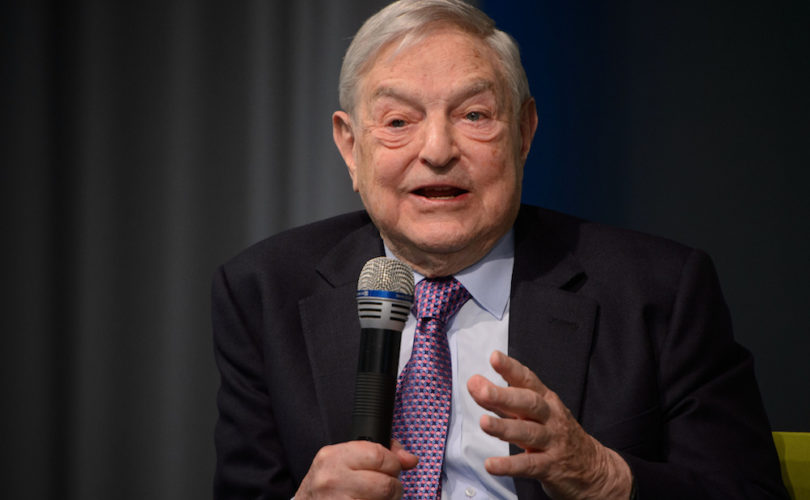 In a new report, Alatheia Nielsen at NewsBusters revealed that more than a quarter of the groups listed as “partners” on the Women's March on Washington website are funded by Soros. These include Planned Parenthood, to whom Soros has given over $21 million since 2000, and the Center for Reproductive Rights, to whom Soros has given over $3 million since 2000. Other Soros-funded groups participating include the National Latina Institute for Reproductive Health, Catholics for Choice, Equality Now, NARAL, the National Abortion Federation, the Human Rights Campaign, and Amnesty International.

The feminist anti-Trump march, which the media have touted as a massive upcoming protest has been marred by disagreements over gender, class, and race.

Some women have withdrawn their participation because of the lack of minority women in the protest's leadership roles, the New York Times reported. Others have disagreed on whether the march – or its offshoot local marches – should focus more on race or gender.

Democratic Socialists of America, a group called “Lady Parts Justice,” and numerous environmentalist groups are partners with the march as well.

According to the Capital Research Center, Soros is also connected to some the leftist groups that say they plan to “shut down” the nation's capital protesting the inauguration on January 20. These groups are part of a coalition called DisrputJ20, which is “planning to paralyze the city [of Washington, D.C.] itself, using blockades and marches to stop traffic and even public transit” the day of Trump's inauguration.

Undercover journalist James O'Keefe released a video on Monday showing members of the DisruptJ20 affiliate D.C. Anti-Fascist Coalition planning to unleash stink bombs and set off sprinklers at the “Deploraball,” a party at the National Press Club celebrating Trump's inauguration.

Soros promotes abortion around the world, lobbies Catholic bishops to be progressive

Soros is often called the “godfather of the left” because he uses his wealth to back left-wing causes around the world. Such efforts include Soros funding a three-year campaign to abolish pro-life laws around the world, particularly in Ireland.

As Nielsen, who researches Soros and his allies, has reported, from 2000 to 2014, Soros gave more than $103 million to media groups throughout the world. $61 million of that supported outlets that push liberal immigration policy, increased labor union power, same-sex “marriage,” Hillary Clinton's now-failed presidential candidacy, and other leftist policies.

During the 2016 presidential election, WikiLeaks revealed that Soros paid $650,000 in April 2015 to fund an initiative to lobby American bishops to support leftist causes during the pope's U.S. visit.

The project's self-reported successful achievements included a “buy-in of individual bishops to more publicly voice support of economic and racial justice messages in order to begin to create a critical mass of bishops who are aligned with the Pope.”

Soros has poured money into Catholics for Choice, a dissident group that promotes abortion as a “Catholic” value.

Soros plans to donate $10 million to groups “contending with incidents of hate” toward “persecuted populations” in 2017. Some of this money will go toward the establishment of “a common hate incident reporting database” and to “equip local communities to stand together against acts of verbal abuse and violence directed towards persecuted populations.”