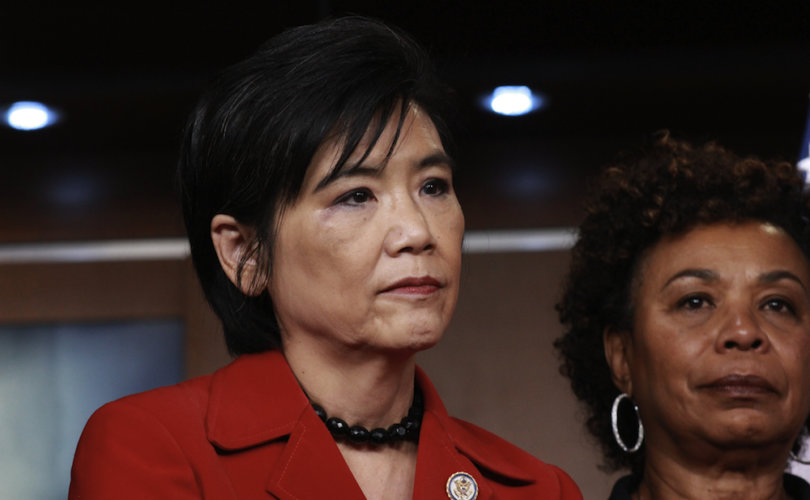 LOS ANGELES, California, August 22, 2017 (LifeSiteNews) – Vociferous pro–abortion Congresswoman Judy Chu will speak Wednesday morning at the Archdiocese of Los Angeles’ Center on the Cathedral Plaza despite objections from pro-life advocates and the archdiocese’s own policy against hosting speakers in conflict with Catholic moral teaching.

The California Democrat, who has consistently received 100 percent ratings from Planned Parenthood and NARAL, is running for re-election in the state’s 27th District in  2018. She is scheduled to present “Moving Beyond the Battle: DC’s Path Forward on Health Care,” from 8:30 a.m. to 10:30 a.m. PDT at the Cathedral of Our Lady of the Angels’ Plaza Center.

But Sacramento-area pro-life advocate Albin Rhomberg told LifeSiteNews an archdiocesan official had told him an outside management company ran the conference center and that the event with Chu will go on.

The archdiocese did not respond to LifeSiteNews’ inquiry into how Chu’s appearance was different from that of the two Planned Parenthood executives who were scheduled to speak at the archdiocese’s conference center in June.

Pro-life media had reported on the June event and the archdiocese subsequently issued a statement saying “the information was acted upon immediately, and the event has been moved,” though it is not known where the Planned Parenthood executives ended up giving their address.

The archdiocese’s statement said as well, “The topic for the event, as well as the occupations of both speakers listed in the promotional material, stands in direct contradiction to Catholic moral doctrine and violates our policy for the use of our facilities in the ADLA handbook, which states, “speakers should not contradict the mission and principles of the Catholic Church, especially in the area of objective Catholic moral teaching.”

Another member of the Community Clinic Association of Los Angeles County is Clinica Romero, which refers for abortion and distributes contraception. The clinic was an apparent partner with the archdiocese in an August 13 Mass commemorating the birth of Blessed Archbishop Oscar Romero at the Cathedral of Our Lady of the Angels and celebrated by Archbishop Gomez.

LifeSiteNews inquired with the archdiocese in that instance and did not receive a response. The archdiocese did amend its Mass invitation, however, sending a new flyer for the event minus any mention of the Clinica Romero but with no disavowal of the clinic.

In addition to her 100 percent ratings from the abortion lobby, Rep. Chu has also been part of the Congressional effort to repeal the Hyde Amendment. She has repeatedly spoken out against calls to defund Planned Parenthood and defended the nation’s largest abortion business.

An “emergency I stand with Planned Parenthood” event was convened at Chu’s California office in March in response to defunding efforts at the time. The gathering was hosted by Planned Parenthood Advocates Pasadena and San Gabriel Valley.

Chu stated in 2015, “Defunding Planned Parenthood would mean truly horrific consequences by forcing women back to the dangerous days of back alley and unlicensed abortions instead of the high quality care available today.”

The California congresswoman also claimed those behind the call to defund Planned Parenthood were doing so in an effort to deny women healthcare.

“Let’s be clear,” Chu said in an August 2015 statement, “the recent calls to defund Planned Parenthood are just the latest in a long campaign meant to deny healthcare for women and vulnerable communities.”

Her comments defending Planned Parenthood have been used by the abortion business in promotional materials.

Local pro-life groups are considering peaceful protests because the archdiocese has not acted to cancel or move Chu’s appearance.