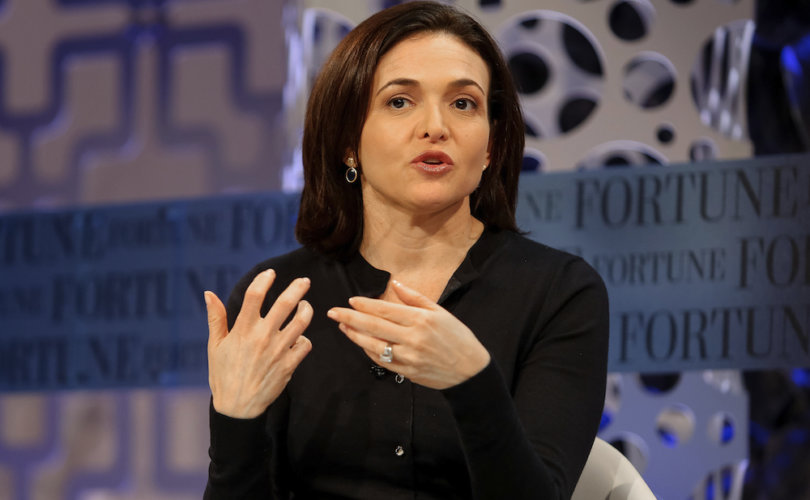 MENLO PARK, California, October 19, 2017 (LifeSiteNews) — The chief operating officer of Facebook lashed out against rival Twitter for its censorship while pro-lifers are saying it’s a case of the pot calling the kettle black.

Rep. Marsha Blackburn, R-Tennessee, paid for a campaign ad on Twitter that was suppressed for being “inflammatory.”

Blackburn’s ad said, “I fought Planned Parenthood and we stopped the sale of baby body parts, thank God.” She also said she is “100 percent pro-life.”

Twitter told Blackburn that they cut her ad because they “deemed” her comment was “an inflammatory statement that is likely to evoke a strong negative reaction.”

Twitter said the ad would be allowed only if Blackburn removed the “baby parts” line.  But that didn’t go well with Blackburn, who while chairwoman of the House Select Panel on Infant Lives saw firsthand how Planned Parenthood supplied fetal experimenters with aborted babies for profit.

The tenacious pro-life champion responded by taking to the same Twittersphere and calling supporters to protest the social media outlet.

.@Twitter shut down our video ad, claiming it's “inflammatory” & “negative.” Join me in standing up to Silicon Valley → RETWEET our message! pic.twitter.com/K3w4AMgW6i

Twitter eventually caved to public outcry and allowed Blackburn to run her ad. “Our ad policies strive to balance protecting our users from potentially distressing content while allowing our advertisers to communicate their messages,” a statement from the social media giant read. Officials said they made a “further review” by “reconsidering the ad in the context of the entire message,” and while they reiterated the “inflammatory language” charge, they decided to allow the ad.

“We believe that there is room to refine our policies around these issues,” Twitter admitted.

Last week, even after Twitter relented, Blackburn demanded an apology. “I am appalled by Twitter’s attempt to censor my pro-life record, and I believe that the entire pro-life community deserves an apology and explanation for their actions,” Blackburn said. “I have spent my entire career fighting to protect and honor life, and I refuse to allow an organization … the ability to silence our efforts to protect the unborn.”

Sandberg, herself a pro-abortion activist and Planned Parenthood supporter, said blocking pro-life politicians’ factual ads goes too far. “In that ad, there’s a lot of positions that people don’t like, that I don’t like,” she said. “But the question is: Should divisive political or issue ads run? Our answer is yes.”

According to the group, Twitter even demanded that Live Action delete its website and create a new one to be able to do business on Twitter.

Live Action was quick to join the Blackburn outcry. “Twitter must now lift the ban on similar advertising from Live Action and the Susan B. Anthony List,” Live Action’s Lila Rose said. “Twitter has significant power as a media channel to influence public opinion, and just as with Rep. Blackburn, they have no business silencing the pro-life voice.”

In 2015, the Center for Medical Progress (CMP) led by investigator David Daleiden secretly recorded meetings and conventions of the abortion industry to expose possible criminal activity. Undercover videos showed Planned Parenthood officials eager to make profits off the illegal sale of baby parts, talking about the illegal modifying of abortion procedures to obtain “intact” babies for sale, and “fresh” specimens to pay for luxury cars for Planned Parenthood staff.

The shocking videos not only exposed Planned Parenthood’s trafficking in aborted babies for profit but caught Planned Parenthood officials making statements such as abortionist Dr. Lisa Harris telling her approving colleagues that “killing” is “the most important thing I could do with my life,” and abortion business owner Renee Chelian saying that  burning aborted babies’ bodies to generate electricity is “a great idea.”

A firestorm of controversy erupted across the nation and Congress began hearings in an attempt to defund the abortion giant. Blackburn chaired the yearlong House investigation, which concluded in 2016 by urging Congress to de-tax fund Planned Parenthood.

This is not the first time Twitter has been charged with Orwellian speech control.  Morally focused ads have been taken down by Twitter censors and certain conservative posts have been erased.

Sandberg’s Facebook is no stranger to censorship, either. The social media monopoly shut down Catholic pages, banned abortion photographs, edited comments critical of sodomy, disallowed other conservative posts, and kicked entire organizations off its platform.

With such censorship on the rise, social media “Gab” intends to offer an alternative to sites that censor posts.

Gab founder and CEO Andrew Torba grew so frustrated with the “left-leaning Big Social monopoly” that he decided to start a new social media network in 2016.

Blackburn is running for the senate seat currently held by Republican Bob Corker, who is retiring next year.