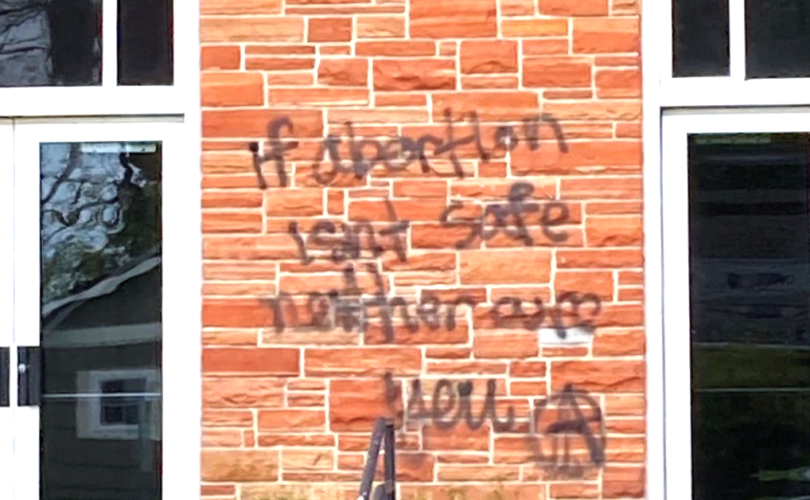 “Last night we vandalized four anti-abortion churches in Olympia,” wrote an anonymous representative of the group in a message submitted to the “Puget Sound Anarchists” website on Sunday. The vandalism is part of a string of attacks of pro-life group facilities, admittedly carried out in protest against the expected overturning of Roe v. Wade, should the leaked U.S. Supreme Court draft majority opinion hold.

The militant pro-abortion group went on the explain that “All of these churches have ties to anti-abortion ‘crisis pregnancy centers,’” which they described as “religious fake clinics that manipulate mostly poor people into having & keeping children they don ’t want or aren’t ready for and marrying whomever impregnated them whether or not that relationship is healthy or safe.”

The group further accused crisis pregnancy centers of being “exploitative” and serv[ing] the aims of upholding the patriarchal family, a primary site of violence against women, queers, and children.”

“We dumped red paint over the entryways and left messages of ‘If abortions aren’t safe then neither are you,’ ‘Abort the church,’ and ‘God loves abortion,’” they continued.

The group also issued what Center for Security Policy identified as an “explicit threat” to local businesses, having listed the financial backers of Olympia’s “Options Pregnancy Clinic” and declaring, “Each of these businesses should be considered responsible for the violence of forced birth.”

The group’s communiqué was signed “Jane’s Revenge, Bo Brown Memorial Cell,” which refers to Rita “Bo” Brown, a member of the George Jackson Brigade, and participated in their series of armed robberies and bombings in the Pacific Northwest in the 1970s while dressed as a man.

Center for Security Policy noted that since the George Jackson Brigade “was known for conducting bombings of local companies viewed as supportive of political opponents,” the threat from Jane’s Revenge to the local businesses it listed “should be viewed as genuine.”

Just weeks earlier, Jane’s Revenge took credit for vandalizing and setting fire to the office of a Wisconsin pro-life advocacy group on Mother’s Day, declaring that they will “adopt increasingly extreme tactics to maintain freedom over our own bodies.”

In their newest message, the group wrote, “While a little graffiti may be a small gesture in the war against patriarchal religious control, we wish to highlight that it’s easy and fun to attack. Our enemies are vulnerable and easy to find.”

Jane’s Revenge concluded with an explicit threat that by now is a kind of slogan: “We echo the words of some crazy bitches from over a decade ago when we say that we are not asking for the right to choose, we are taking into our own hands the ability to abort a pregnancy.”

“We are not asking for advertisements or media that pander to trans people, we’re wresting the tools to change our bodies out of the control of doctors. We are not appealing to state power for an end to patriarchal violence, but threatening: ‘If abortions aren’t safe, then neither are you.’”