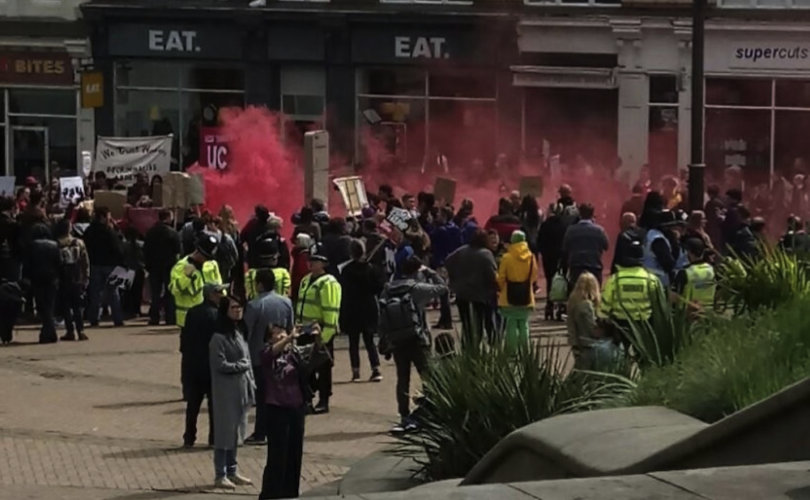 BIRMINGHAM, England, May 24, 2017 (LifeSiteNews) — Red smoke filled the air as pro-abortion activists broke into an enclosure, invaded the stage, and threw smoke bombs before the fourth annual UK March for Life.

The small crowd of protesters later blocked the March as it made its way through central Birmingham. They screamed while the pro-lifers sang and prayed. But despite the opposition and the pouring rain, the marchers remained upbeat.

“Our witness is a witness of love and joy,” proclaimed the master of ceremonies.

Thousands of pro-lifers gathered Saturday in Birmingham to commemorate the 50th anniversary of the legalization of abortion in the UK. The day began with Mass at Birmingham Oratory at 9 a.m. and at St. Chad’s Cathedral at 10. The “LifeFest” fair opened at 11:45 a.m. in Birmingham’s Victoria Square with education booths, live music, pro-life merchandise, and street food.

The abortion supporters made their first attack before the speeches.

“It was a bit difficult to see over people’s heads, but what seems to have happened is that protesters broke into the front of the enclosure, by the stage,” witness Alithea Williams told LifeSiteNews. “Apparently, some of them got on the stage and had to be restrained while the organisers called (authorities) to have them removed. I saw a lot of red smoke go up. … I could hear one of the MCs saying, “Get off, you’ll electrocute yourself!” I think they were trying to tear down the sound system.”

The speakers included representatives from all nations in the United Kingdom and from Ireland: Aisling Hubert from England, Sister Roseann Reddy from Scotland, Bernadette Smyth from Northern Ireland, and Rebecca Roughneen from the Irish Republic. The first keynote speaker was American Lila Rose, president and founder of Live Action.

According to England’s Society for the Protection of Unborn Children (SPUC), Rose showed a video about changing minds through education, which “certainly seemed to make some of the pro-abortion protestors watching from the side very uncomfortable.” Nevertheless, the pro-abortion activists disrupted the March soon afterward, first forcing it to divert and then blocking it completely when it reached St. Philip’s Anglican Cathedral. Police dissuaded the pro-lifers from marching on, apparently fearful that the marchers would be attacked.

Footage of the blockade shows pro-lifers singing “As the Saints Go Marching In” to a guitar as whooping, screaming pro-abortion activists run toward the cathedral, cutting them off. As the pro-lifers begin to sing “This Little Light of Mine,” the ragged line of pro-aborts screamed, “Shame on you,” the usual chant about women deciding their fate and the familiar line that pro-lifers don’t care if women die.

“The protest was so nasty, and it lasted so long, the only thing we could do was kneel and pray, and many of us knelt on the grass and said the rosary,” Anne from Cheltenham told the Catholic Herald's Corinna Turner.

According to the March for Life website, “One priest was spat on but showed Christ-like serenity and refused to be provoked. People waited patiently, a young man eased himself out of his wheelchair and dropped to his knees to pray, others sang joyfully in the face of a baying mob who were shouting at the top of their voices, ‘You’re not going to march, you’re not going to march!’ … but God was with us and we did.”

The blockade ended when police reinforcements arrived, set up a cordon and, according to the Catholic Herald, led away “at least one pro-choice protester” to a police van. The March then continued back to Victoria Square as the protesters dispersed. The speeches resumed as the second keynote speaker, Catherine Adair, gave her testimony. Adair, an former employee of Planned Parenthood, is now mother to five children and a motivational pro-life speaker.

The pro-lifers knelt for a prayer service led by Bishop Robert Byrne and then listened to the singing of celebrated Scottish tenor Martin Aelred.

“As I listened to the beautiful voice of Martin Aelred,” wrote the March for Life blogger, “I reflected on what I’d learnt about pro-lifers that day: no matter how long it takes, no matter who tries to shout them down, they would be patient but they would win this battle. With the future in the hands of pro-lifers such as these, the tide will turn.”