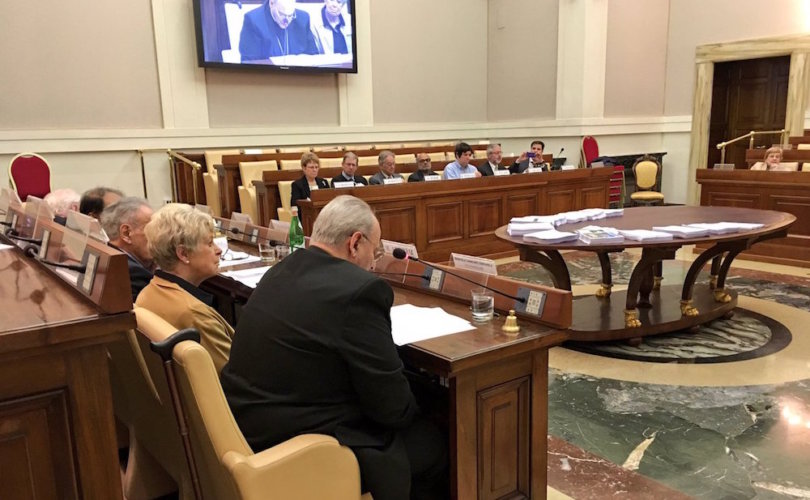 VATICAN CITY, February 27, 2017 (LifeSiteNews) – Leading population control activist Paul Ehrlich spoke at a Vatican conference on “how to save the natural world” today despite an outcry by members of the Catholic faithful.

Ehrlich supports forced abortion and mass sterilization. He has compared human babies to garbage, said the Catholic Church's moral teachings are “just as unethical” as a “terrorist act,” and suggested sex-selective abortion might be a better fate for girls than being born.

LifeSiteNews delivered a petition of more than 10,000 signatures asking the Vatican to rescind Ehrlich's invitation to speak.

“Thousands called on Pope Francis to ensure that a leading proponent of abortion and sterilization was not given a platform in the Vatican, but Ehrlich’s speech has taken place nonetheless,” said Maria Madise of Voice of the Family. “The pro-life and pro-family movement is deeply concerned about the openness of Vatican authorities to anti-life and anti-family positions. These are not purely academic questions: the lives and wellbeing of real children are at stake.”

“Over the last few years defenders of life and family have tried to give Pope Francis the benefit of the doubt but every new scandal raises further questions about the motivations of those who now hold key positions of power in Rome,” said John-Henry Westen, co-founder and editor-in-chief of LifeSiteNews.com. “In an interview with our news service Ehrlich told us he was 'thrilled' with the direction Pope Francis is taking the Catholic Church. Yet just a few years ago Ehrlich stated that ‘the pope and many of the bishops are one of the truly evil, regressive forces on the planet’ because of the Church’s opposition to contraception. Ehrlich has changed none of his positions in that time.”

Pope Francis is moving the Church “more towards concern for environmental issues like climate disruption and the Sixth Great Extinction that threaten the lives of future generations,” Ehrlich told LifeSiteNews via email.

Of whether he sees hints that Pope Francis will attempt to reverse Catholic teaching against contraception, Ehrlich told LifeSiteNews, “I think the Pope recognizes the threat to future lives, and to the persistence of society, posed by overpopulation…Family planning with modern contraception is the only ethical solution, and if made universally available would greatly reduce the frequency of abortion. It also would generally improve women’s health and education. Francis is a brilliant and compassionate man – draw your own conclusions.”

Ehrlich's presentation this afternoon was titled Why We Are in the Sixth Extinction and What It Means to Humanity. Ehrlich is the author of a 2015 study that he says “shows without any significant doubt that we are now entering the sixth great mass extinction event” during which lack of biodiversity will cause many species to go extinct.

Ehrlich's research suggested carbon emissions and the clearing of land for farming, logging, and settlement have significantly harmed the planet, paving the way for the “sixth great mass extinction.”

“We are now profoundly damaging the conditions under which our numbers have increased from about 1 million to about 7.3 billion people, with a net of 250,000 extra people every day…The survival of the natural world, and ultimately our survival, depends on our adoption of principles of social justice and sustainability,” a program for the Biological Extinction conference says.

In his 1968 book The Population Bomb, Ehrlich predicted hundreds of millions of people would starve because of overpopulation. He argued “compulsory population-control laws, even including laws requiring compulsory abortion” could be Constitutional in the United States if the crisis was grave enough. Ehrlich's alarmist predictions didn't come true, and his views on overpopulation were debunked.

In 2015, Bishop Marcelo Sanchez Sorondo, chancellor of the Pontifical Academy of Sciences, mocked “right wing” critics who think the United Nations is “the devil.” In 2016, he defended giving American pro-abortion presidential candidate Bernie Sanders a speaking slot at a conference.

Sorondo didn't respond to the petition LifeSiteNews sent to him.

“For our part, we will continue to speak out against the evil and the errors that have found their way into the temple of God, asking Our Lady to lead us and all the faithful, in this dark hour of the Church's history,” said Virginia Coda Nunziante of Italy's Famiglia Domani.