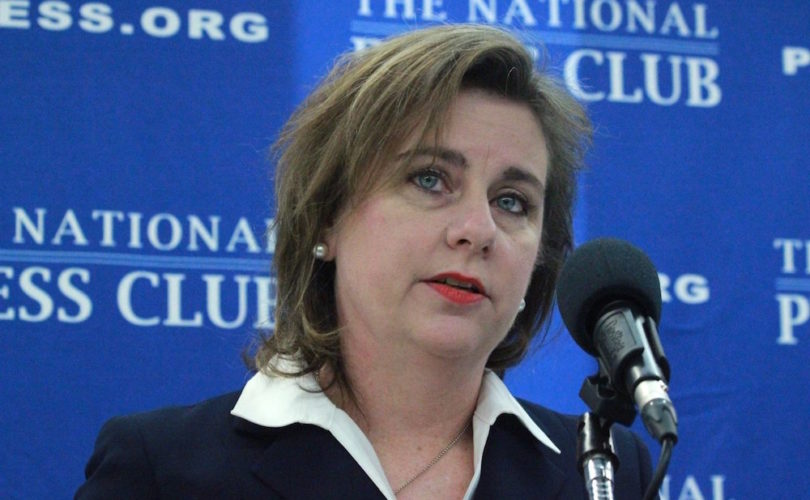 WASHINGTON, D.C., November 10, 2016 (LifeSiteNews) – The 2016 elections made it “very clear” that pro-abortion Republicans are “a thing of the past,” a pro-life political leader said at a press conference Wednesday afternoon.

“One thing that is very clear in [the] Republican party is that there will be no more Mark Kirks,” said Marjorie Dannenfelser, President of the Susan B. Anthony List. “That type of pro-choice, pro-abortion leadership is a thing of the past.”

“And unfortunately, Mark Kirk didn't learn it soon enough,” Dannenfelser continued, speaking of the pro-abortion Republican senator from Illinois who was defeated by a Democrat Tuesday.

“We are teed up to defund Planned Parenthood,” said Dannenfelser, and a Trump administration and pro-life Congress presents a “great opportunity ahead of us in the next year to really do great work.”

She said a “historic moment in the last debate” was that the “absolute clarity between the two candidates on the abortion issue was on stage for all to see.”

“Donald Trump described what a partial-birth abortion is–something that most people would rather not just be discussed because we all recoil,” said Dannenfelser. “He explained that. He said, 'You may think that's fine, but it's not fine to me.' She [Hillary Clinton] defended her position [on] partial-birth abortion and said that an unborn child has no rights up until birth. That is a contrast that obviously favors us. That's going on offense. That's how we win elections.”

Ralph Reed of the Faith & Freedom Coalition echoed Dannenfelser's statements, saying there was a “bright line of demarkation” separating the candidates on key life and family issues.

“There were a lot of premature obituaries written of the religious, conservative, and pro-family movement during this campaign, and we can now say this morning, as Mark Twain did, that the reports of our death have been greatly exaggerated,” he said.

Tony Perkins of Family Research Council Action noted the historic, high evangelical turnout and praised Trump for giving “the most concise definition of late term abortion that any Republican or any presidential candidate” has articulated in a general election.

“We have seen a repudiation of not just Barack Obama's eight years of big, statist government, anti-faith, anti-family policies, but really a rejection of a court that has acted as an oligarchy for the last four decades,” said Perkins. “We are on the cusp of a conservative generation.”