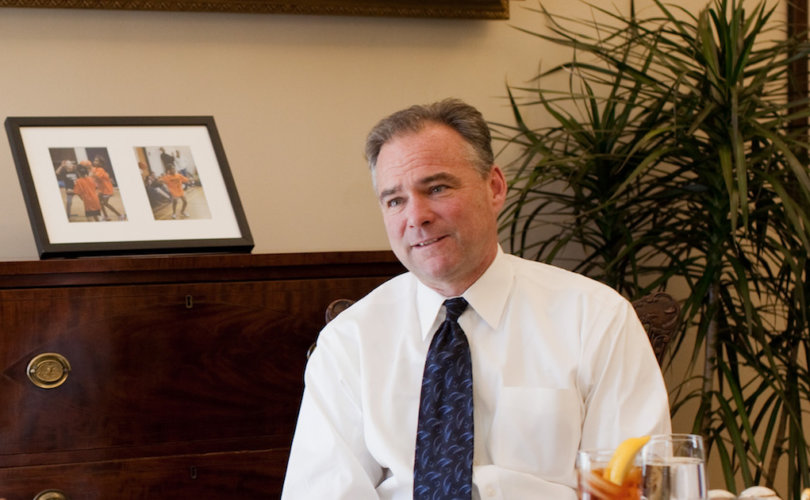 Meanwhile, as Catholics call for Kaine to be denied Communion in accord with the Church’s laws, his bishop in the Diocese of Richmond has issued a statement saying that Catholics have a duty to determine their own worthiness “through an upright and informed conscience.”

Kaine and his wife were “like every other married couple going to church on a Sunday morning — if every other couple were met by reporters, people craning for a better look and a picture, and a standing ovation,” the Richmond Times-Dispatch reported.

Kaine and his wife went to Mass at St. Elizabeth Catholic Church in Highland Park, Virginia, a parish in the Diocese of Richmond. Kaine reportedly sang in the choir and performed a solo.

“He's in the choir, and he's a tenor. He hasn't been able to sing as much since he's been a United States senator,” Father Jim Arsenault, the priest at St. Elizabeth, told NPR. “But every once in a while, our choir director Kim Ford will nab him and say, Tim, we need your voice. And he is very grateful to help out.”

Arsenault told NPR that he thought the issues most important to Kaine were women’s pay and “social justice issues.” He said that he could reconcile Kaine’s label of himself as “personally pro-life” despite the fact that as governor of Virginia, Kaine oversaw several executions.

“I know that he's definitely against capital punishment and works to help defend those who are on death row,” said Arsenault. “The church has a teaching with regard to we're pro-life, and we believe in that seamless garment of life. We respect sometimes lawmakers make difficult decisions.”

As governor of Virginia, Kaine opposed partial-birth abortion and even authorized the state’s “Choose Life” license plate option, but throughout his political career Kaine has separated his “personally pro-life” views from the public policy for which he advocates. Since becoming a United States senator, Kaine has shifted farther to the left on abortion. He has a perfect pro-abortion record in the Senate and supports Planned Parenthood. Kaine is also a co-sponsor of the Women’s Health Protection Act, a bill that would undermine pro-life laws across the country.

In 2004, then-Cardinal Ratzinger, now Pope Emeritus Benedict XVI, wrote: “Not all moral issues have the same moral weight as abortion and euthanasia. For example, if a Catholic were to be at odds with the Holy Father on the application of capital punishment or on the decision to wage war, he would not for that reason be considered unworthy to present himself to receive Holy Communion. While the Church exhorts civil authorities to seek peace, not war, and to exercise discretion and mercy in imposing punishment on criminals, it may still be permissible to take up arms to repel an aggressor or to have recourse to capital punishment. There may be a legitimate diversity of opinion even among Catholics about waging war and applying the death penalty, but not however with regard to abortion and euthanasia.”

The Catechism of the Catholic Church teaches that “Human life must be respected and protected absolutely from the moment of conception. From the first moment of his existence, a human being must be recognized as having the rights of a person – among which is the inviolable right of every innocent being to life.” The Catechism adds: “The inalienable right to life of every innocent human individual is a constitutive element of a civil society and its legislation” (CCC 2270, CCC 2273).  The Catholic Church also teaches that abortion is “gravely contrary to the moral law” (CCC 2271).

Canon 915 of the Code of Canon Law instructs that those “persevering in manifest grave sin are not to be admitted to Holy Communion.”

LifeSiteNews spoke with Arsenault, but he referred a request for comment to the Diocese of Richmond.

Deborah Cox, Director of Communications of the Catholic Diocese of Richmond, referred LifeSiteNews to a July 22, 2016 statement from Richmond Bishop Francis X. DiLorenzo on Catholics in public office:

The Catholic Church makes its position very clear as it pertains to the protection of human life, social justice initiatives, and the importance of family life. From the very beginning, Catholic teaching informs us that every human life is sacred from conception until natural death. The right to life is a fundamental, human right for the unborn and any law denying the unborn the right to life is unequivocally unjust.

Legislative issues pertaining to these matters are advocated on behalf of myself and Bishop Loverde, of the Diocese of Arlington, before the Virginia General Assembly, U.S. Congress, and with state and federal agencies and administrations through the Virginia Catholic Conference, a public policy advocacy organization. Through this organization, elected officials in Virginia are aware of the Church’s positions on such important issues.

We continue to maintain an open communication with public officials who make on-going decisions impacting critical, moral and social issues. This is a responsibility I take seriously, along with my brother bishops, to reach out to public leaders to explain Catholic principles and encourage them to protect human life and dignity in all decisions they make.

We always pray for our Catholic leaders that they make the right choice, act in the best judgment and in good conscience, knowing the values and teachings of the Catholic Church.

It is the duty of all Catholics, no matter their profession, to decide through an upright and informed conscience as to their worthiness to receive the Sacrament of the Holy Eucharist.

In addition to trumpeting the role he says his faith plays in his life, Kaine frequently brings up his Catholic education.

The Jesuit high school from which Kaine graduated, Rockhurst High School in Kansas City, Missouri, tweeted their congratulations. The tweet described Kaine as a “true believer in service and a ‘man for others,’” a reference to the school’s motto.

We're very proud of alumnus @timkaine of the Great Class of 1976! A true believer in service and a “man for others”! More to come soon. AMDG

Thanks for the shout out @timkaine! Keep going for the “magis”! Video c/o @MJHNova. AMDG pic.twitter.com/mbONLqNgmQ

AMDG is an abbreviation for the Jesuit’s Latin motto Ad Majorem Dei Gloriam, which means “For the greater glory of God.”

Jesuit Father James Martin, the editor of America magazine, was also quick to congratulate the pro-abortion senator and mention his past involvement with the Jesuit Volunteer Corps.

Congratulations to #TimKaine, a graduate of a Jesuit high school (@RockhurstHS) and a former Jesuit Volunteer (FJV) in Honduras @JVCnation

#TimKaine sums up his Jesuit education @RockhurstHS with a shout out to our traditional goal of forming men and women “for others.”

Planned Parenthood also celebrated Kaine as a man who has “dedicated his life to serving others.” He has a 100% rating from the group, which is America’s largest abortion vendor.

Not all priests had responses to Kaine’s candidacy as positive as Martin’s and Arsenault’s.

Bishop Thomas J. Tobin of Providence, Rhode Island wrote that Kaine’s support of abortion, same-sex “marriage,” and same-sex parenting make it apparent his faith “isn’t central to his public, political life.” Dominican Father Thomas Petri told Kaine, “Don’t show up in my communion line” because the priest takes seriously canon law’s instruction that those who publicly manifest in grave sin not be admitted to Holy Communion.