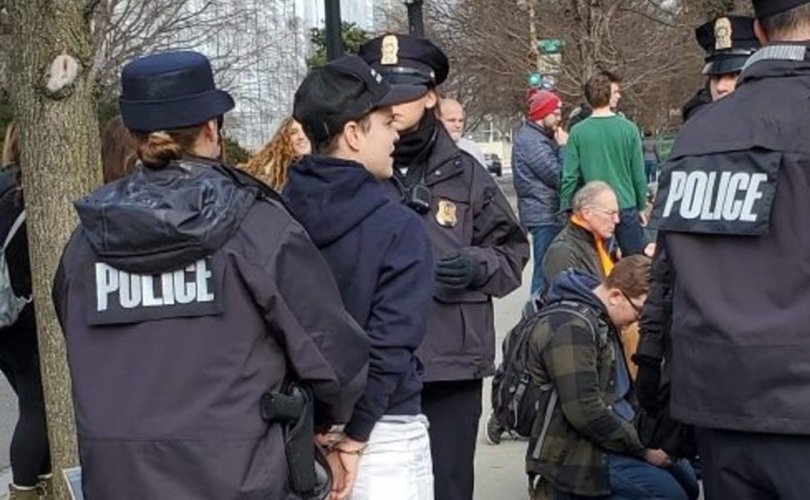 January 30, 2020 (LifeSiteNews) ― A female pro-abortion activist told a college student at last week’s March for Life that if she didn’t back up, she would “f **** slit [her] throat.”

The pro-abortion activist, who appeared to be an adult woman, made the threat to 20-year-old Selene Cerankosky, the president of the Robert Morris University branch of Students for Life of America (SFLA).

The encounter happened outside the U.S. Supreme Court, where Cerankosky had gone to reserve space before the March for Life rally began. The college junior was threatened by the woman around 11:00 a.m.

“At that point we [students] were trying to get to the front where the press was,” Cerankosky told LifeSiteNews today. “We were all going to the front, and I got blocked. Someone stood in front of me.”

That someone was a stone-faced young woman wearing a pair of pale pants stained with red paint, presumably to simulate blood.

“She seemed very angry,” said Cerankosky, and that’s when the woman threatened her, saying, “Back up, or I will f****** slit your throat.”

“I was kind of shocked at first,” the pro-life activist said, noting that the pro-abortion activist had broken the law.

“I think she knew she had done something wrong because after that she just said, ‘Back up, back up, for God’s sake.’”

Cerankosky held her ground. The young pro-lifer told LifeSiteNews that she didn’t want abortion activists thinking that these kind of tactics are effective in intimidating pro-lifers. Eventually she turned her back on the furious woman, who stomped off in a huff.

Cerankosky then told her rally coordinator, Stephanie Stone, of the incident. Stone ran to tell the nearest police officer.

“The police believed her,” Cerankosky said. “And I think they found some kind of weapon on [my harasser], which is why they handcuffed her.”

A photograph Cerankosky shared with media shows the hancuffed pro-abortion activist being led away by police.

Cerankosky said that the unnamed activist was not the only person at the rally wearing simulated blood-soaked trousers. The young pro-lifer saw a pile of them and a “lot of people” wearing them.

“It’s not the most pleasant sight,” she remarked and surmised that they are meant to represent post-abortion bleeding. According to one national health service, excessive bleeding “occurs in about 1 in every 1,000 abortions” and “severe cases may require a blood transfusion.”

The young pro-life activist hopes her experience doesn’t dissuade other people from going to rallies and said that such gruesome threats aren’t very prominent. At the same time, she admits that recent pro-life successes have infuriated abortion advocates.

“I think they’re getting more aggressive and angry,” Cerankosky said.

“I think they’re going to resort to more barbaric methods [of counter-demonstration],” she continued.