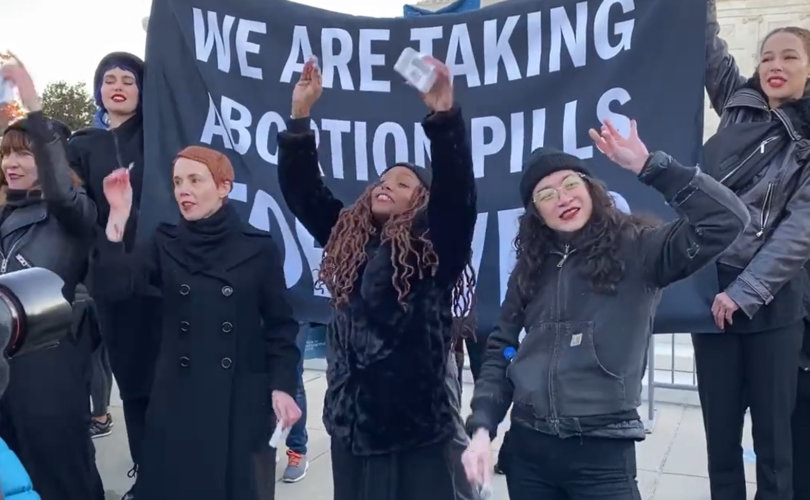 The pro-abortion protestors were countered by thousands of pro-life advocates, who gathered outside the Supreme Court building Wednesday morning to promote the overturning of Roe v. Wade as the Court hears oral arguments in a case which has the potential to reverse the 1973 precedent which established abortion as a “constitutional right” in the United States.

Pro-lifers chanted slogans including “We are the pro-life generation and we will abolish abortion” and “Hey hey, ho ho, Roe v. Wade has got to go.”

Among the chants from pro-lifers outside SCOTUS:

“We are the pro-life generation and we will abolish abortion.”

Oral arguments began today in the crucial Dobbs v. Jackson case, which concerns Mississippi’s HB 1510 law banning abortions from being committed past 15 weeks for any reason other than physical medical emergencies or severe fetal abnormalities.

Mississippi Solicitor General Scott Grant Stewart is leading the defense of Mississippi’s life-saving bill, which could see the “right to abortion” overturned by the highest court in the land.

Stewart, a former clerk for Justice Clarence Thomas and a former official within the Trump administration’s Justice Department official, presented his oral argument to the Court today. He asserted that the “constitutional right” to abortion determined in judicial precedent is “egregiously wrong,” with “no basis in text, structure, history, or tradition.”

Meanwhile, the lead counsel for upholding Roe v. Wade and Planned Parenthood v. Casey, the 1992 case with affirmed Roe’s finding of a “constitutional right” to abortion is Julie Rikelman, the Litigation Director for the radically pro-abortion Center for Reproductive Rights.

Previously, Prelogar worked as Assistant Special Counsel to Robert Mueller in the specious investigation of then-President Donald Trump for alleged collusion with Russia in the 2016 election, a baseless allegation which has since been debunked.