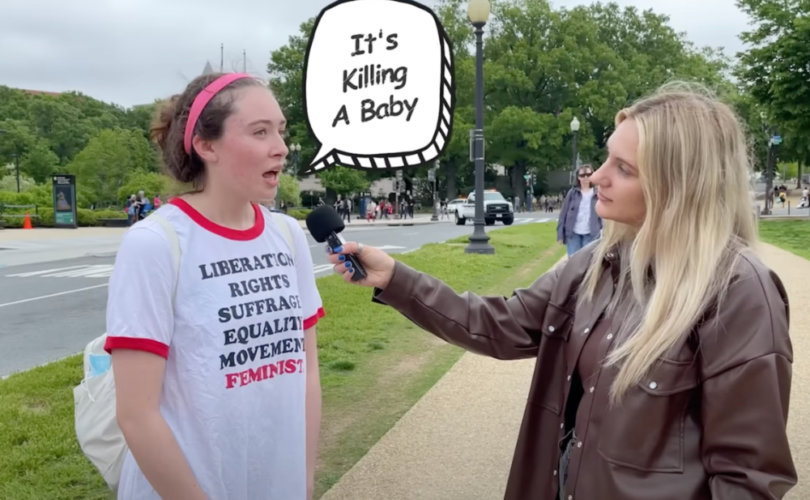 WASHINGTON, D.C. (LifeSiteNews) – Pro-abortion attendees at a recent “Bans off our Bodies” rally in Washington, D.C. shared their support for aborting babies up until the moment of birth.

Some attendees denied that a preborn baby in the womb is alive, according to video posted by Students for Life of America (SFLA), while others argued that because preborn baby cannot survive without the mother, abortion is acceptable.

Many attendees shared their sentiments toward pro-lifers and the potential reversal of Roe v. Wade with profanity, too.

“Life begins at birth, you said?” SFLA interviewer Lauren Marlowe asked one activist. “I guess so, I guess that’s my opinion,” one activist says. Her friend affirmed that she shares the same opinion.

When pressed if that means a baby doesn’t become alive until it is born, the activists seemed to change their mind.

One male activist said that a “fetus or a clump of cells” must “rely on the mother to live, like fetus can’t live without the mother.” Anna Lulis, also with SFLA, pointed out that “multiple groups of people” are dependent on others to live, such as infants and individuals with disabilities.

Another woman, who appeared to be a mother based on her comments, seemed stumped when asked why only women who had been pregnant could hold positions on abortion.

Lulis asked her if she had ever owned a slave, and if not, how she could oppose slavery.

Another abortion activist told SFLA that abortion is controversial because “it’s killing a baby.”

“So it’s controversial, because people believe that you’re taking away a human life but you don’t have a life until you are out of the womb, you don’t have a voice, and I would say that it’s the woman’s voice at that point,” the abortion activist told Lulis.

“How can you kill something that’s not alive?” Lulis asked.

Another protester said she opposed abortion when she knew a baby is alive in the womb, but had no idea when that is. When pressed, she said “a woman has a right to abort the baby at any point.”

“So you believe in abortion up to birth?” Lulis asked. “Yes,” the abortion activist responded.

Other protestors shared similar thoughts, declaring that a baby’s life begins only when he or she is born.

Support for abortions through the moment of birth is not just an anomaly held by a handful of activists at one rally, however.

Democratic governors in New York and Illinois have signed legislation in the past three years to legalize abortions up until the moment of birth.

Also, the former Democratic Governor of Virginia, Ralph Northam, supported allowing doctors to kill babies after they were born, in defense of a Virginia delegate’s bill to legalize abortions while a woman is in labor.