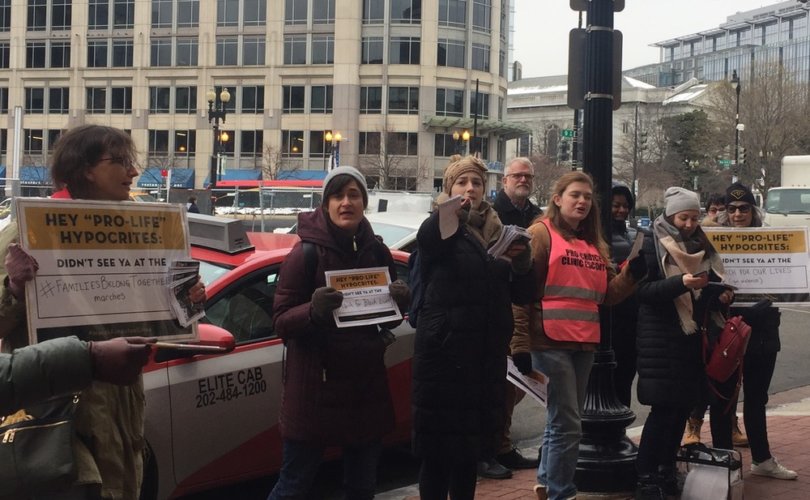 Pro-abortion protesters outside the 2019 March for Life Conference

WASHINGTON, D.C., January 21, 2019 (LifeSiteNews) – As pro-life advocates from around the country and the world streamed into the Marriott Renaissance Hotel for the March for Life conference on January 17, a group of no more than a dozen pro-abortion advocates stood on the sidewalk outside to protest the event.

While pro-life hero David Daleiden spoke inside to a packed hotel ballroom, LifeSiteNews ventured outside to talk to the protesters.

When he identified himself as a LifeSiteNews reporter, eyes rolled, “Oh, our favorite. You write about us all the time,” said one in a hard-to-miss sarcastic tone. “We love it. Thank you. You really publish exactly what we want.”

The protesters made it clear that they have a low opinion of LifeSiteNews and its readers, all of whom they feel are in need of moral correction. So LifeSiteNews offered the pro-abortion activists a once-in-a-lifetime opportunity, extending a microphone to them and asking, “What would you like to say to our readers? I’m giving you a big chance here.”

Not one would go on the record, and all refused to have their pictures taken. A photo taken earlier that morning shows some of their faces and signs, as does one the group posted on Twitter.

When the LifeSiteNews offered again to interview any or all of the protesters, each one bypassed the opportunity.

One of the protesters stumbled when she suggested to the male journalist that he has no right to speak out about abortion “because you don’t have a uterus.”

Most likely cognizant of the “transgender” guy standing nearby who might judge her words to be a crime against politically correct transgender ideology, another quickly corrected her statement: “But maybe he does have a uterus.”