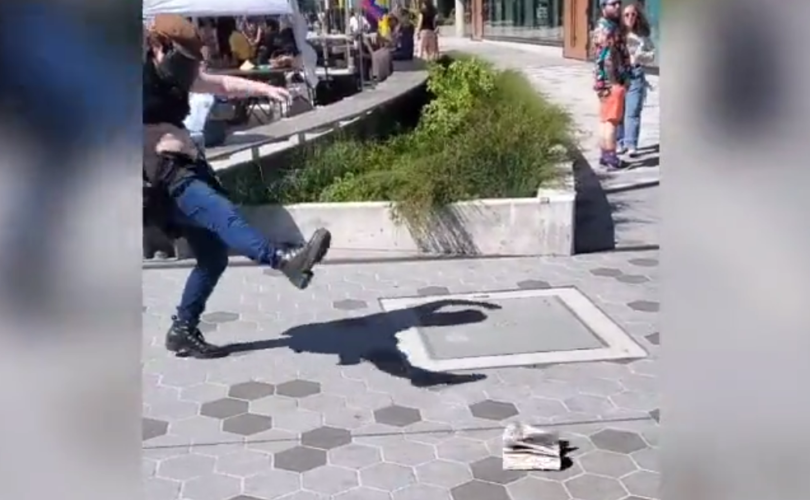 In the highly offensive footage posted to social media on Sunday, a group of pro-abortion activists can be seen kicking a Bible back and forth to each other as if it were a soccer ball.

Desecration of another persons Religious material is a HATE CRIME.
If this was a Quran people would be outraged. People must really hate the WORD of GOD right now. pic.twitter.com/IjXqab1qma

When the man recording the footage – who goes by “The Seattle Preacher” on social media — explains to the anti-Christian protesters that it is a “hate crime” to destroy someone else’s religious texts, a voice in the background can be heard cackling with laughter.

The video proceeds to cut to the Seattle Preacher holding the now-damaged Bible, telling the protesters that they would not have treated the book with such disrespect if it were the Quran.

Immediately, one of the protesters snatches the Bible back from the man, and the next piece of footage shows the Bible sitting in human waste in the bottom of a portable toilet.

“That right there is a hate crime … That is ungodly and it is wrong,” the Seattle Preacher lamented, with his voice breaking.

The blasphemous footage sparked a large reaction on social media, with pro-lifers and Christians expressing their disgust with the anti-Christian actions of the pro-abortion activists.

“These people are truly the cancer of Earth. Everything they pretend to be against is *exactly* who they are,” reacted prominent songwriter “Five Times August.”

These people are truly the cancer of Earth. Everything they pretend to be against is *exactly* who they are. https://t.co/daJtcowq3R

“One day, their souls will understand how foolish and blind they truly are,” added professional poker player turned Christian evangelist Anna Khait.

One day, their souls will understand how foolish and blind they truly are. https://t.co/Za1gaHIbIa

This display of sacrilege is only one incident of many similar events that have occurred in the United States since the overturning of Roe v. Wade by the U.S. Supreme Court last Friday.

As reported by LifeSiteNews, two Christian pregnancy centers were the target of vandalism over the weekend, with one of the centers being set ablaze after being spray-painted with pro-abortion messages and threats.

In addition to the pregnancy centers, a historic Catholic church in West Virginia was burned to the ground last weekend in what authorities are describing as a “suspicious” fire.