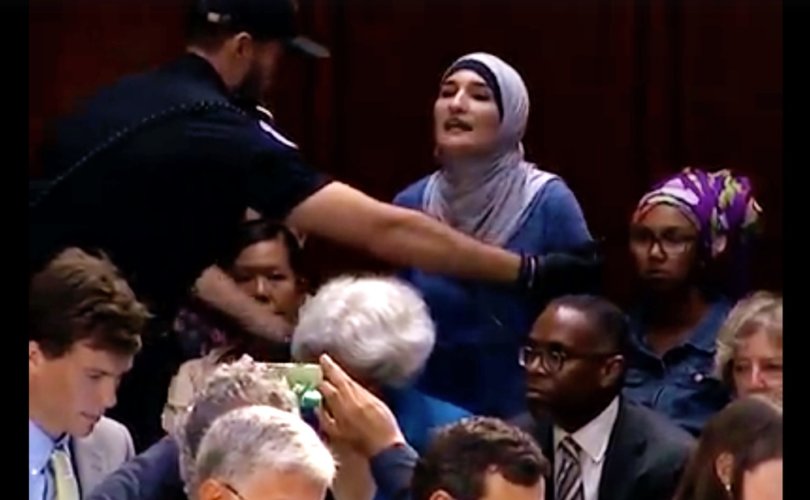 WASHINGTON, D.C., September 5, 2018 (LifeSiteNews) – The most attention-grabbing element of Judge Brett Kavanaugh’s first day before the Senate Judiciary Committee was not his opening statement or the statements of any senators considering his nomination to the Supreme Court, but the frequency of protesters attempting to shout down the proceedings.

At several points throughout Tuesday’s confirmation hearing, protesters screamed loudly and persistently enough to visibly fluster lawmakers and force them to pause. Much of the shouting was indecipherable, though phrases such as “travesty of justice,” “back-alley abortions,” and “cancel Brett Kavanaugh” can be heard.

Capitol Hill police arrested a total of 70 people, Politico reports, charging 61 with disorderly conduct and another nine with “crowding, obstructing, or incommoding.” Most of the protesters were women.

Among those arrested and forcibly removed from the chamber was Women’s March leader Linda Sarsour, National Review reports. Her group officially took credit for “disrupting the Kavanaugh hearings every few minutes, with hundreds of women prepared to get arrested to prevent these hearings from moving forward.” NARAL Washington and Missouri executive directors Tiffany Hankins and Alison Dreith, UltraViolet co-founder Shaunna Thomas, and actress Piper Perabo were also arrested.

Outside of the hearing room, a group of women wearing the red robes of the Hulu drama The Handmaid’s Tale gathered to line the walkways and atrium in silent protest. The fictional series depicts a dystopian future in which women are enslaved and raped to bear children for their rulers. Left-wing activists have seized on the show as a cautionary tale about where legally protecting preborn babies would supposedly lead.

Members of both parties expressed disapproval at the protesters, though not all of the interruptions came from the back of the room. When Senate Judiciary Committee Chair Chuck Grassley began his opening remarks, he was almost immediately interrupted by Democrat senators, including Kamala Harris of California and Cory Booker of New Jersey. Sen. Richard Blumenthal, D-NY, even moved to adjourn the hearing minutes after it started.

Democrats framed their interruptions as an indignant reaction to Republicans supposedly withholding relevant documents (a charge Sen. Ted Cruz, R-TX, argued was inaccurate). But Sen. Thom Tillis, R-NC, called attention to a tweet by NBC News reporter Kasie Hunt indicating that Democrats had decided in advance to “disrupt” the hearings:

Democrats plotted coordinated protest strategy over the holiday weekend and all agreed to disrupt and protest the hearing, sources tell me and @frankthorp

The hostility surrounding Kavanaugh’s nomination stems from left-wing activists’ fears that Kavanaugh would give the Supreme Court its first consistent conservative majority since Roe v. Wade in 1973. Conservatives hope and liberals fear he would provide the long-awaited fifth vote in a variety of long-running judicial controversies, particularly overturning Roe and allowing states and Congress to directly vote on whether abortion should be legal.

Kavanaugh’s thin record of abortion-related statements and rulings does not conclusively reveal his position. He said Wednesday that the doctrine of stare decisis (respecting judicial precedent) is the “foundation of our system,” that Roe was “entitled to respect” because it “has been reaffirmed many times,” and that he wouldn’t give answers about on future cases or the correctness of past cases.

The strongest evidence that Kavanaugh would oppose Roe is a 2017 speech on the jurisprudence of his “first judicial hero,” the late Chief Justice William Rehnquist. He approvingly cited Rehnquist’s judgment that a right to abortion was not “rooted in the traditions and conscience of our people,” and that Roe was an example of “freewheeling judicial creation of unenumerated rights.”

It remains uncertain whether Kavanaugh’s statements reflect genuine deference to Roe, or are phrased to appease senators who could cast the deciding vote for his confirmation.