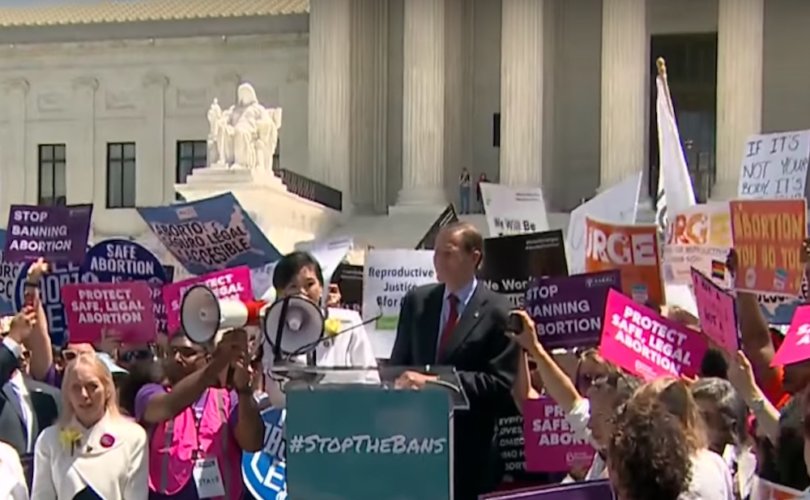 May 22, 2019 (LifeSiteNews) – With pro-life momentum continuing to push for tougher abortion restrictions and outright bans across the country, pro-abortion activists held rallies Tuesday across the country to promote their opposition.

Following numerous states that have passed bans on abortion once a fetal heartbeat can be detected, Alabama and Georgia recently signed new laws that ban the vast majority of abortions. Supporters hope the wave of more aggressive pro-life laws will provoke enough legal challenges to eventually reach the U.S. Supreme Court and overturn Roe v. Wade, enabling abortion to be directly banned in any state.

“We are seeing the same level of energy, possibly more, because some people didn't believe even with Justice Kavanaugh on the bench that Roe was threatened,” NARAL president Ilyse Hogue declared. “But these laws show that it absolutely is, that there is a goal coming out of these states with a national anti-choice movement to criminalize abortion and punish women.”

“Our goal is that we are working not only to prevent (Georgia’s heartbeat law) from going into effect, but also using this energy to actually expand women's access to reproductive health care,” said Andrea Young, executive director of the ACLU’s Georgia chapter. “That means Medicaid expansion. It means making sure women have access to reproductive health care at every stage of their life and that it's affordable and accessible for all.”

A number of pro-life activists attended some of the rallies to press the Democrat attendees on their positions and document abortion advocates’ handling of dissenting views. Live Action found that all of the 2020 contenders rejected any restrictions on abortion, and conservative blogger Elizabeth “Activist Mommy” Johnston captured pro-abortion activists on video swearing, screaming at, and chasing her off as she crashed one rally with an image of an aborted baby:

We asked every 2020 candidate at the #StopTheBans rally their stance on abortion, and not one broke from the Democratic platform of abortion until birth, for any reason, taxpayer funded.

This is grossly out of step with the views of the American people. pic.twitter.com/nhzYy9QbDz

“The intolerance of the left was on full display today,” she told PJ Media. “I thought I would do my civic duty and remind them what the medical procedure they are defending actually looks like (…) I was assaulted, pushed, and my sign covered for an hour as I simply tried to show the crowd what abortion looks like.”