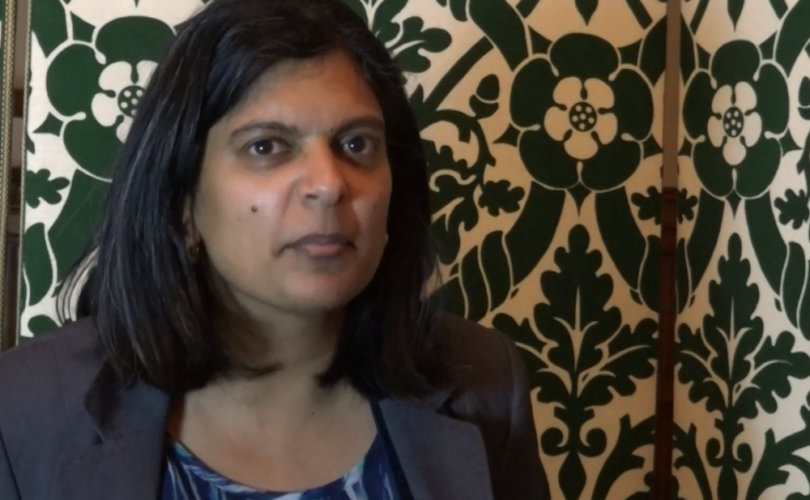 LONDON, England, October 24, 2017 (LifeSiteNews) — The Council of the London borough of Ealing has voted to do all they can legally to stop a peaceful pro-life vigil outside the Marie Stopes Ealing abortion clinic.

The vote, tabled on October 10, was in response to a petition of the local pro-abortion group Sister Supporter. According to the Good Counsel Network, which has been offering pro-life witness and support outside the clinic six days a week since 2013, Sister Supporter has been regularly protesting the quiet vigil for 18 months.

Rupa Huq, the Member of Parliament for the London constituency of Ealing Central and Acton, has asked Parliament to impose “buffer zones” to end pro-life witness outside abortuaries. She made headlines by accusing the pro-life witnesses in Ealing of “weaponizing rosaries.”

Good Counsel Network director Clare McCullough told LifeSiteNews that there had been a pro-life witness outside Marie Stopes Ealing for more than 23 years without a single charge of harassment. Although Rupa Huq claims the pro-life supporters “intimidate” women, McCullough says the “circus” around the clinic began only with the appearance of the pro-abortion activists a year and a half ago.

McCullough told LifeSiteNews that the typical pro-life witness outside Marie Stopes Ealing consists of three people, one praying and perhaps two handing out leaflets. They don’t hold  photos of aborted babies. “There’s one lady who comes once a fortnight with a graphic picture, that’s it,” she said.

The Ealing pro-lifers are vastly outnumbered by the up to 34 Sister Supporters who descend upon the clinic Fridays and Saturdays to harass the pro-life vigil.

“They’ve created the incident, and they’re blaming us,” said McCullough.

She called the effort to remove the Ealing pro-life vigil a “two-pronged effort” in which Rupa Huq is “very involved.”

The Labour MP first proposed removing the demonstrators to Parliament — and accused them of “weaponising rosary beads” — in January. In September, the Huffington Post UK reported that Huq told Labour conference delegates that there were problems with protesters outside a clinic in her constituency

“For as long as I can remember, there has been a constant phony vigil outside the clinic, with people stopping women going into the clinic to access services,” she said. “So we have had had a counter-protest, called Sister Support, recently, and now there is a kind of stand-off on the pavement.”

“I want to table an amendment to the domestic violence bill … to create a safe zone around these clinics because the pavements should be a safe space.”

According to the Huffington Post UK, Huq is working with the British Pregnancy Advisory Service (BPAS) to write the amendment. BPAS is the UK’s biggest abortion business.

On October 10, the UK’s left-wing Guardian newspaper printed an essay by Huq in which she confessed to “seething with rage” at the pro-life vigil. She wrote that the Ealing Council might have found a way to stop it through a “public space protection order.”

Public space protection orders have not been used to curtail freedom of speech, however. They are mainly used to curb public drunkenness and drug-taking. Nevertheless, Good Counsel Network’s director looks forward to the question being taken to court, for there is no evidence, she told LifeSiteNews, of any wrongdoing on the part of pro-life witnesses.

“The saddest thing is all their activities are aimed at preventing us from helping (pregnant women),” McCullough said.

On October 16, Huq asked the Home Secretary by written question if “she will take steps to strengthen public order legislation to address protests by religious and other groups outsides family planning clinics.”

Home Secretary Amber Rudd replied that “peaceful protest is a vital part of a democratic society. However, the government is clear that rights to peaceful protest do not extend to harassment, intimidating behaviour or serious disruption to the community, and the law provides protection against such behaviour. The police have a range of powers to manage protests and the use of police powers is an operational matter for them.”

Huq’s and the Sister Supporters’ focus on Ealing’s pro-life witnesses has catapulted McCullough into the public eye. In the past few weeks, she has been interviewed several times on national television, radio and in print about the activities of the the Good Counsel Network. One message that she has been able to publish is the lack of counseling services in the abortion business.

At least one woman, Aisha Chithira, has died during an abortion at the Marie Stopes Ealing clinic.