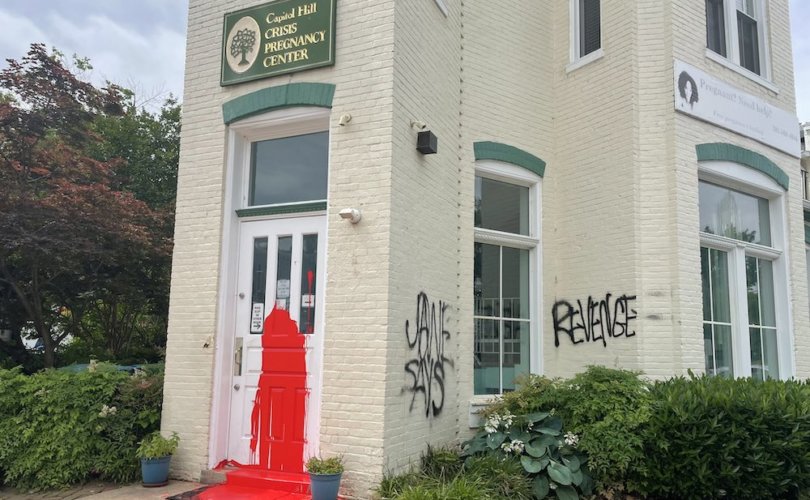 WASHINGTON, D.C. (LifeSiteNews) – Pro-abortion activists in the nation’s capital hurled red paint and left a threatening message at a pro-life pregnancy center between Thursday night and Friday morning, amid a wave of leftist rage over the prospect of overturning Roe v. Wade.

The Daily Signal reports that red paint on the door of Capitol Hill Crisis Pregnancy Center, presumably representing blood, was discovered Friday, along with the message “Jane Says Revenge” on the walls. Though not yet confirmed, the vandalism may be the work of the pro-abortion group Jane’s Revenge, which has taken credit for similar crimes against churches and pregnancy centers across the country.

Clinic director Janet believes the vandalism was done by pro-abortion protestors concerned about the possible overturn of Roe v. Wade. Police on the scene pic.twitter.com/Mx31uBqxiP

“This is an on-going investigation,” Metro Police said in a statement to the Daily Wire’s Mary Margaret Olohan. “Anyone with information should call MPD’s CIC at 202-727-9099 or text 50411. The report for this incident has not been started. We will be able advise more once the report has been completed.”

Last month, a draft was leaked of a majority opinion by conservative Justice Samuel Alito for Dobbs v. Jackson Women’s Health Organization, which concerns Mississippi’s 15-week abortion ban. The draft, which is authentic but not yet confirmed to reflect the U.S. Supreme Court’s final decision in the case, overturns the Court’s 1973’s Roe precedent as “egregiously wrong from the start,” and if it is ultimately what the Court decides will have massive ramifications for the abortion debate, by restoring the elected branches of government’s full ability to decide abortion policy for themselves.

The development sparked a wave of outrage from pro-abortion politicians and activists, including organized protests at the homes of Republican-appointed justices. The Biden administration refused to condemn the choice of private residences as protest sites, and Democrat House Speaker Nancy Pelosi went so far as to praise the “righteous anger” of the protesters.

Despite Democrats’ halfhearted qualifiers that pro-abortion protests be “peaceful,” there have been more than a dozen incidents so far this month of vandalism, disruption, and even arson against pro-life targets including churches, pregnancy centers, and advocacy groups.

For her part, CHCPC executive director Janet Durig is trying to focus on her organization’s mission.

“At first, I was sad. And now I’m just saying that the times, I guess,” Durig told the Signal. “It’s sad that somebody feels they have to do this when we help so many people.”

“I would like people to focus on the fact that we help women,” Durig added. “We don’t just visit with them one time if they want to come back. There’s all sorts of programs that help them grow as mothers. And fathers, by the way.”