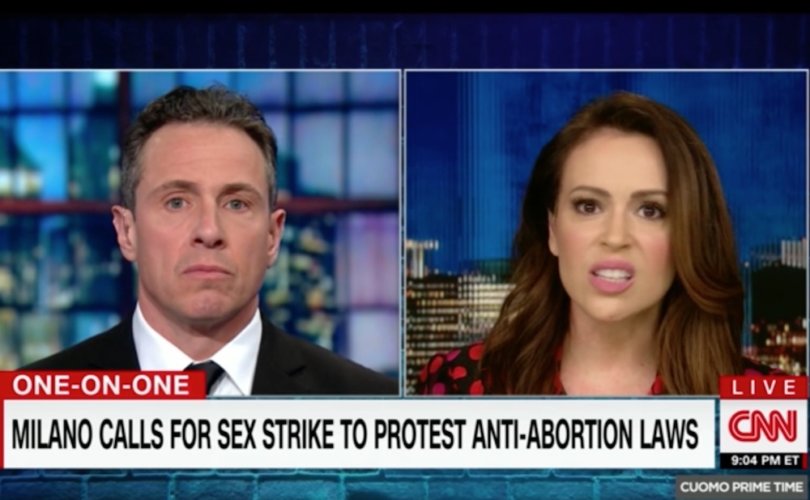 The film industry generates considerable jobs and revenue for the Peach State, leading Milano and dozens of other celebrities to threaten to boycott the state in hopes of scaring Georgians into rejecting the law, then punishing them for enacting it. A handful of smaller studios have since announced they’re refusing to film in Georgia, and Milano herself has called on women to take part in a “sex strike,” because “until women have legal control over our own bodies we just cannot risk pregnancy.”

In a Tuesday evening interview with Cuomo, Milano attempted to explain that the “sex strike” proposal was merely an attempt to shock people into paying attention.

“Nobody wants to get an abortion,” says Alyssa Milano. “We are all pro-life. But there are circumstances that we cannot avoid. … Just because there are women that don't believe in abortion, don't take away someone else's right.” https://t.co/NNuJJQKprb pic.twitter.com/96sdQvhCvT

“My purpose for sending out that tweet was simply, I felt like these bills were being ignored and sending out that tweet, look at me now, I’m on your show and we’re talking about women’s rights and how they’re being rolled back,” she said. “These bills are ridiculous. In Georgia, the heartbeat bill, basically criminalizing abortion after six weeks. Most women don’t know they’re pregnant before eight weeks. I was eight weeks before I found out.”

“These bills make sex and getting pregnant extremely dangerous for women,” she added.

Milano also declared that she doesn’t think “there's a human on the planet that is not pro-life” and “we are all pro-life,” reiterating the common talking point that “nobody wants to get an abortion, nobody.” In fact, pro-abortion activist efforts such as Shout Your Abortion are predicated on the idea that act of abortion itself, not merely its availability, is a source of pride that should be normalized.

“But there are circumstances that we cannot avoid” such as “mother’s health,” Milano said, despite the Georgia law containing exceptions for health and various other circumstances. “There’s just not being ready, you know, and what that means financially and for someone’s destiny. This is an economic issue. Just because there are women who don’t believe in abortion, don’t take away someone else’s right.” The pro-abortion Cuomo did not press her to explain why a preborn child’s rights should be taken away.