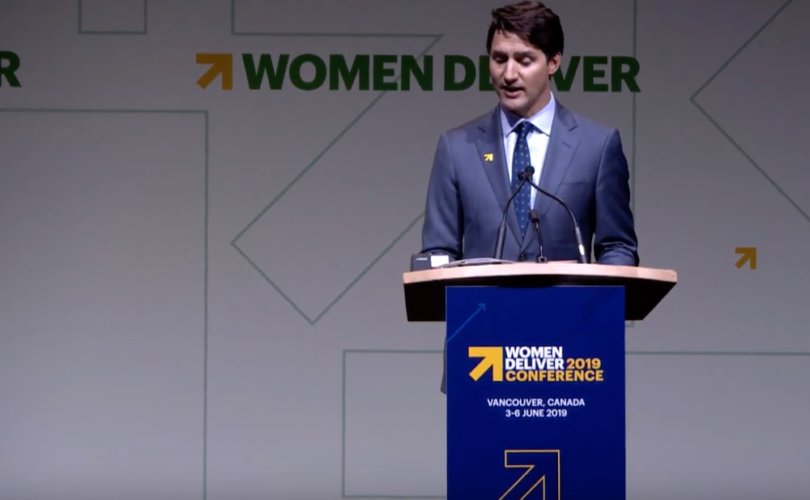 VANCOUVER, B.C., June 6, 2019 (LifeSiteNews) — The name of a superior of a Canadian order of Catholic religious has been removed from the Women Deliver 2019 conference website after LifeSiteNews asked her why she donated to the global pro-abortion event.

Sister Joan O’Keefe, superior of the Sisters of Charity of Halifax, was listed on the conference website as a donor to the four-day gathering in Vancouver that ends Thursday.

O’Keefe, who is a volunteer doula and for 13 years was the coordinator for a home for single parents, told LifeSiteNews she doesn’t regard the conference as advocating abortion, and that she did not donate on behalf of her order.

Rather, it was a private donation from her personal allowance “for one person who lives in poverty to attend. She is caring about healthcare and respect for women. I certainly did not see her as going to a ‘pro-abortion’ event!”

It’s unclear if O’Keefe was referring to herself or another sister.

What she read about the conference was that it was “the world’s largest conference on gender equality and the health, rights, and wellbeing of girls and women in the 21st century. It will serve as a catalyst for advocates working to achieve a more gender equal world,” O’Keefe told LifeSiteNews.

“Please do not use this to defame the Sisters of Charity,” she wrote.

LifeSiteNews contacted the archdiocese of Halifax-Yarmouth to ask if Archbishop Anthony Mancini was aware the head of a Catholic religious order was publicly listed as a donor to the conference, but did not hear back.

Women Deliver 2019, which has International Planned Parenthood Federation, Marie Stopes International, and the Guttmacher Institute among its sponsors, drew over 8,000 people representing 2,500 organizations and 160 countries, ostensibly to discuss women’s health and advancement.

However, the New York-based charity is clear on its website that its advocacy efforts are “anchored in sexual and reproductive health.”

Trudeau opened the conference Monday by warning women’s “rights” are in jeopardy, and on Tuesday, announced that Canada was upping its funding for “sexual, reproductive, maternal, newborn, and child health” to $1.4 billion annually by 2023, a commitment that will extend until 2030.

Half of that, or $700 million a year, is dedicated to “sexual and reproductive health” — that is, abortion, contraception, and sex education.

The Women Deliver 2019 website warns that one of the “Global Development Trends” is that “sexual and reproductive health and rights…including the right to safe abortion, are under threat.”

“The global political climate is precarious, and there is a growing and troubling chilling effect on girls’ and women’s rights in many places. While some recent gains have been made, sexual and reproductive health and rights (SRHR), including the right to safe abortion, are under threat in many places,” it reads.

According to the Women Deliver 2017 annual report, the organization’s second, third, and fourth strategies for that year were devoted to advancing so-called sexual and reproductive health and rights, or SRHR:

Strategy 2: Advocated with a constant and emphatic voice for SRHR including safe abortion….Women Deliver engaged in a number of SRHR sector strategies, including SheDecides a funding initiative designed to fill the gaps left by the U.S. decision to reinstate the Mexico City policy.

Strategy 3: Acted as the ears, eyes, and voice for advocates on gender equality and the health, rights, and wellbeing of girls and women with a special focus on maternal, sexual, reproductive health and rights.