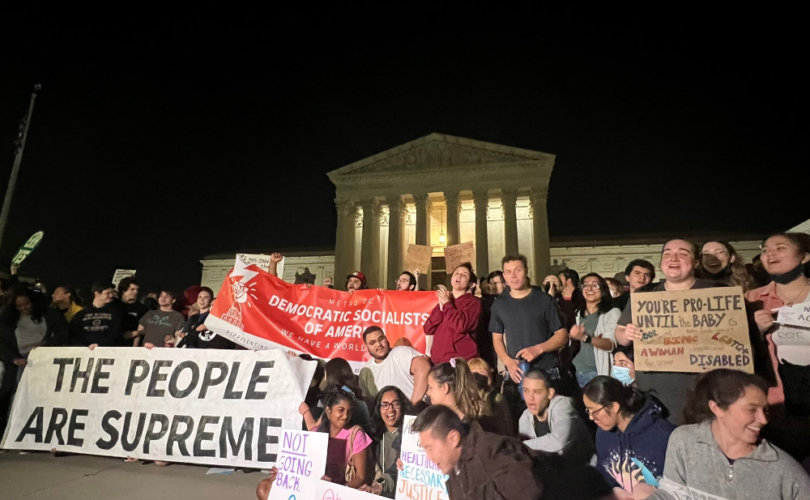 Pro-abortionists in front of the U.S. Supreme Court, late May 2, 2022Douglas Blair / Twitter

According to an initial leaked draft majority opinion allegedly written by conservative Justice Samuel Alito and obtained by Politico, the U.S. Supreme Court has voted 5-4 to overturn its nearly 50-year-old Roe v. Wade decision, which imposed abortion on demand across the country.

“Roe was egregiously wrong from the start. Its reasoning was exceptionally weak and the decision has had damaging consequences,” wrote Alito in the leaked draft.

The leaking of the draft is an unprecedented incident and has been described by the SCOTUS Blog as “the gravest, most unforgivable sin.”

Following the “earthquake” which the alleged draft has created, crowds of abortion supporters have swarmed in front of the Supreme Court building. “If you feel like f****ng screaming, then just scream,” shouted one woman late last night as crowds began to amass.

Small protest against the leaked Roe opinion outside #SCOTUS pic.twitter.com/5el7w7aZSU

Counterprotestors starting to get testy at the Supreme Court pic.twitter.com/vOaEzOZmO3

Politico reported that Justices Clarence Thomas, Neil Gorsuch, Brett Kavanaugh, and Amy Coney Barrett joined Justice Alito in the reported majority ruling. The draft itself notes that it was first circulated from Justice Alito on February 10, 2022, and was deemed by the SCOTUS Blog Twitter channel to be “almost certainly an authentic draft opinion.”

Pro-abortion protesters then took aim at Justice Kavanaugh and Justice Alito in particular when shouting outside the Supreme Court building, while chants of “we will not go back” rang out across the streets.

Huge crowd in front of #scotus. Loud chants of “We will not go back.” pic.twitter.com/mlYJuCEzqy

Meanwhile, the Daily Signal recorded footage of Catholic University of America students bravely taking to the streets to prayerfully witness for the unborn, praying the rosary on their knees while the pro-abortionists danced and shouted in their faces.

Catholic University students have come to the court. They are the few pro-life voices out here right now. pic.twitter.com/JfY3UbzbCd

The pro-aborts attempted a number of times to physically interfere with the pro-life crowd, trying to steal signs and drowning out the pro-lifers using siren calls on megaphones.

One pro-abortion activist attempts to steal a pro-life sign. Observers are attempting to de-escalate. pic.twitter.com/YxxVUTlgoS

Conflict between the pro-life leftist group and the larger crowd. The pro-abortion crowd is using sirens to drown out the pro-life crowd. pic.twitter.com/eTB15H1e3Q

Just a bunch of average Americans spontaneously appearing in DC at 11:30 demanding the destruction of the Supreme Court. https://t.co/TO1TOkYbff

A number of the pro-abortionist held coat hangers, and called for for what appeared to be widespread violence, shouting: “If we don’t get it, tear it down.”

Pro-abortion protestors: “If we don’t get it TEAR IT DOWN” pic.twitter.com/wJAtVZWekm

Pro-life demonstrators were subsequently forced out of the crowd by the pro-abortionists, after having been called “assholes” and told to “f****ng leave.”

The pro-life group is forced out by the pro-abortion crowd. They are heckled as they leave. pic.twitter.com/rkiYB6OSIT

Parts of the pro-abortion crowd at the Supreme Court calling a couple of pro-lifers “assholes” and screaming at them to “fucking leave” and chanting “get a vasectomy” etc. etc. etc. pic.twitter.com/sogyOSMXkw

LifeSiteNews is also present on the ground in front of the Supreme Court, documenting the days proceedings as pro-lifers from across the political divide continue to maintain a presence in defence of the unborn.

Pro-abortion “Catholic” Speaker of the House Nancy Pelosi called the leaked draft an “abomination,” and “one of the worst and most damaging decisions in modern history.”

“Several of these conservative Justices, who are in no way accountable to the American people, have lied to the U.S. Senate, ripped up the Constitution and defiled both precedent and the Supreme Court’s reputation,” she wrote.

Sebastian Gorka, former Deputy Assistant to President Trump, echoed the suggestion of many on social media, when he stated that the leak of the draft was a deliberate move “to sabotage the Summer Court and to intimidate those who wish to send this abomination of Roe v. Wade back to the states.”

BREAKING NEWS: Why they leaked from the Supreme Court. #SCOTUS pic.twitter.com/JqI08yvPYA