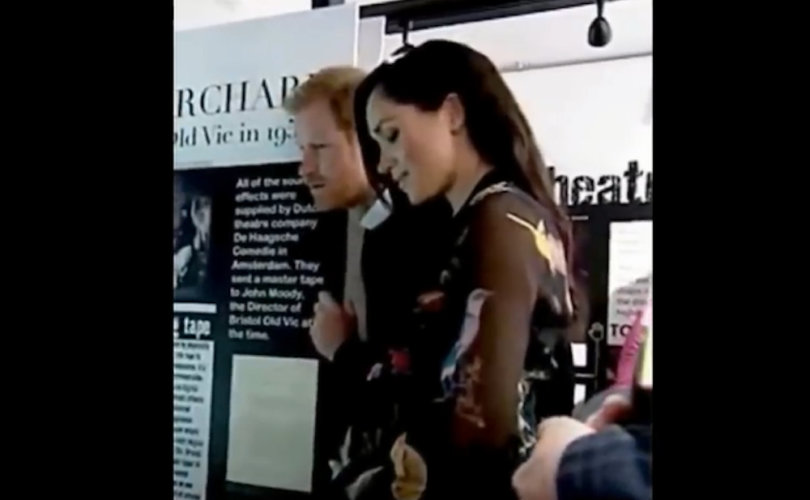 BRISTOL, England, February 6, 2019 (LifeSiteNews) — A viral video clip shows pregnant and pro-abortion Meghan Markle smiling and closing her eyes while her midsection reacts to an apparent kick from her baby.

Heartwarming video footage of a visit that the Duke and Duchess of Sussex made to the Old Vic Theatre in Bristol last week appears to show Markle feeling the marvel of her baby’s movements. While the 37-year-old former actress had been listening closely to actors at the theater, she then becomes distracted and looked at her baby bump before smiling broadly and holding on.

The Duke of Sussex, aka Prince Harry, is the third grandson of Queen Elizabeth II. He married the former Meghan Markle on May 19, 2018.

Now in the third trimester of pregnancy, Prince Harry, 34, and Duchess Meghan expect the arrival of their first-born in April. They disclosed in mid-October 2018 that she was in the 12th week of pregnancy. When a spokesman for the royal family announced the good news last year, he said Duchess Meghan was “expecting a baby,” not a fetus.

After leaving the Old Vic, the two royals paid a visit to One25 — a charity serving prostitutes in Bristol, and toured the city’s cultural history on a snowy Feb. 1. While visiting the charity, Meghan wrote messages on bananas in lunches to be distributed to female prostitutes throughout the West Country city. Having declared herself “in charge of banana messaging,” the duchess wrote personalized messages: “You are special” and “You are brave” on the fruit included in the lunch packages she prepared.

Despite being on the brink of welcoming her child this spring, Duchess Meghan was glad that Ireland approved elective abortion in 2018. She said she was pleased with the result of the May 25 referendum that repealed Ireland’s former protection for the unborn.

Under the UK Abortion Act 1967, which applies to England and Wales, Duchess Meghan could have arranged the killing of her baby until 24 weeks in the womb if two doctors agree that allowing the child to live would injure the mother’s physical or mental health. Late-term abortions are permitted in the UK for babies if they exhibit, for example, Down syndrome.

The American-actress-turned-Duchess is an outspoken feminist and supporter of LGBTQ issues. Before her wedding in May 2018, she also declared herself opposed to Brexit — the public referendum in favor of British sovereignty that will bring about the country’s break with the European Union.