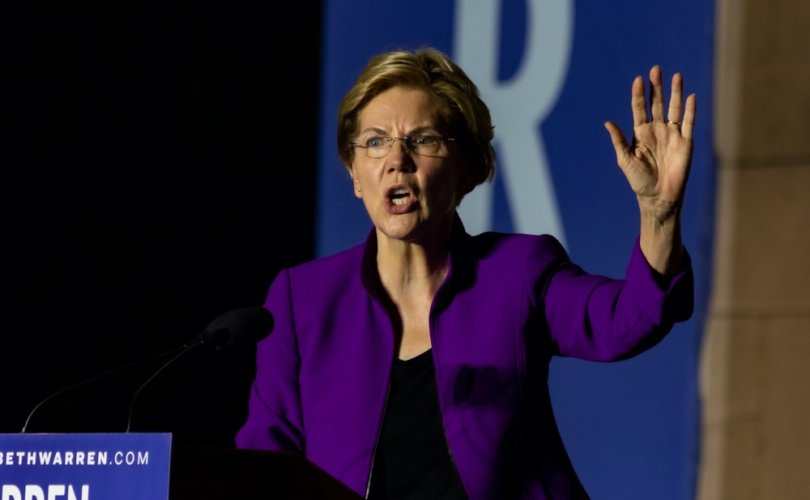 Her decision comes after a disappointing performance in this week’s Super Tuesday state primary contests, in which Warren failed to win in any of the 14 states and territories which voted, and finished third in her own state of Massachusetts.

“We didn’t reach our goal,” she told campaign staff in a call, “but what we have done together — what you have done — has made a lasting difference. It’s not the scale of the difference we wanted to make, but it matters — and the changes will have ripples for years to come.”

In an obvious reference to her recent bitter confrontations with pro-abortion former New York City Mayor and billionaire Michael Bloomberg, Warren said: “In this campaign, we have been willing to fight, and when necessary, we left plenty of blood and teeth on the floor. And I can think of one billionaire who has been denied the chance to buy this election.”

Warren has so far refrained from endorsing either Vermont Senator Bernie Sanders or Biden. Many have speculated about the possibility of Warren becoming Sanders’ running mate should he be the Democratic nominee.

“She spoke with both men on Wednesday, according to their campaigns,” the Associated Press reported. “She hasn’t made a decision and is assessing who would best uphold her agenda, according to a person familiar with her deliberations who spoke on condition of anonymity to discuss private conversations.”

Sanders told MSNBC it was “too early” to discuss whether Warren could serve as his running mate. Biden has applauded her for her campaign, calling her “the fiercest of fighters for middle class families.”

“Would you consider asking Sen. Warren to be your running mate?” pic.twitter.com/8FQn082aUQ

Senator @EWarren is the fiercest of fighters for middle class families. Her work in Washington, in Massachusetts, and on the campaign trail has made a real difference in people's lives. We needed her voice in this race, and we need her continued work in the Senate.

Despite his long history of gaffes, which in the last two weeks have included mixing up his wife and sister and forgetting “the thing” that the Declaration of Independence says created all men equal, Biden is currently leading the way in the race for the Democrat nomination, with a 1.5% lead over Sanders according to the RealClearPolitics polling average. He currently has 453 of the required 1,991 delegates to secure the nomination on the first ballot at the Democratic National Convention, compared with Sanders on 382 delegates.

Hawaiian Rep. Tulsi Gabbard, who has distinguished herself from other candidates by saying she supports some mild limits on third trimester abortions, is the only woman still technically in the race for the nomination. She won two delegates, also in American Samoa, and has 1.7% support according to polls.

Warren’s campaign was marked by the promotion of numerous “woke” policies.

She recently urged Arizona lawmakers to reject a bill that would protect schoolgirls being forced to compete in sports with boys who claim to be girls. Warren described the now-successfully passed Arizona House Bill 2706 as “cruel.”

“Trans athletes are not a threat,” she tweeted. “We need to protect trans kids—and all LGBTQ+ kids—and ensure they feel safe and welcomed at school. I urge the Arizona legislature to reject this cruel bill.”

She promised to ask a “trans child” to approve her selection for Secretary of Education if she were to become president said she would include “gender non-binary” individuals in her White House cabinet. She has also called for gender-confused male inmates to be placed with women in prisons.

Warren also displays her “preferred pronouns” on social media as a show of solidarity with transgender activists and vowed to wear a Planned Parenthood scarf to her inauguration.

Fox News host Tucker Carlson recently savaged Warren’s campaign saying that it will be remembered as having “died by wokeness.”