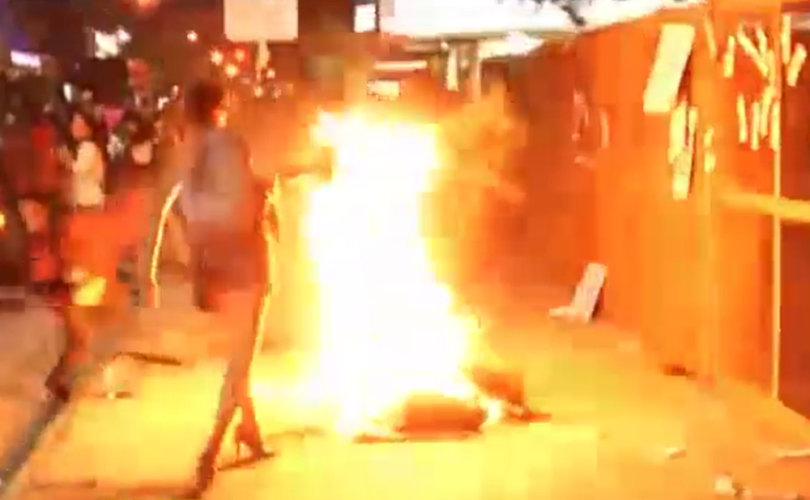 October 20, 2017 (LifeSiteNews) – A mob of thousands of feminists attacked the cathedral church of the northern Argentinean city of Resistencia on Saturday and Sunday night, attempting to set it on fire and pelting the building with paint, reddened tampons, and rocks, according to video documentation and reports in local media.

The women, dubbed “ultra-feminists” and “femi-nazis” by the Argentinean press, burned the door of the cathedral with a pile of burning trash and reportedly damaged a statue of the Blessed Virgin Mary in front of the building. Many wore masks in the style of “Antifa” and were topless, with slogans written across their chests.

The women also assaulted other buildings and monuments in the city, including schools, businesses, and a statue of a local historical figure, leaving spray-painted graffiti with slogans such as “Kill your father, your boyfriend, and your brother,” “Burn the pope,” “Abuser priests,” “Abort males,” “Death to males,” and “Kill your rapist.”

Two men who attempted to peacefully interpose their bodies between the women and the Cathedral were assaulted by a mob of masked women who spray-painted them and threw objects at them until they retreated.

The events were the latest in a series of attacks on Catholic cathedral churches that have become an annual ritual of hatred by Argentine feminists, many of whom despise the Catholic faith and embrace abortion, homosexuality, legalized prostitution, and other behaviors rejected by Christianity.

As in previous years, the attacks were occasioned by a national convention of feminists held in the town, the  32nd annual “National Women’s Encounter,” which was attended by an estimated 60,000 women who marched through the streets chanting feminist slogans and carrying signs to commemorate the event.

Although the march route was designed to avoid the cathedral and therefore prevent an attack on the building similar to others that have accompanied the convention in previous years, a group consisting of an estimated 5,000 marchers deviated from the route to attack the building.

The police had placed metallic barriers around the church in anticipation of the attacks, but to little avail. The feminists threw objects over the barriers and defaced the barriers themselves, stuffing reddened tampons into the latticework. As in numerous previous attacks on Catholic cathedrals in Argentina, the police stood by and allowed the damage to occur, explaining that they wanted to “avoid incidents.”

In response, an infuriated group of women and men from local neighborhoods emerged from their homes on Sunday night to protest the feminists near the cathedral, chanting “¡Qué te vayas!” and “¡Fuera!” (“Get out of here!”).

The people of the town “don’t want violence,” a female counter-protester told a local reporter. “We don’t want them to continue to destroy what little we have. It’s such a poor town, and they’ve come to destroy everything we have.”

“I, as a woman, don’t want to counted among these girls, if they can be called that,” the counter-protester continued. “A woman wears a dress and has the odor of perfume, not the odor of alcohol and drugs like them, and also they’re murderers, they don’t desire life.”

The events follow an attack on the cathedral of Buenos Aires in March by masked, topless women who clashed with police and attempted to knock down barriers placed in front of the building. The women were participating in celebrations of “International Women’s Day.”