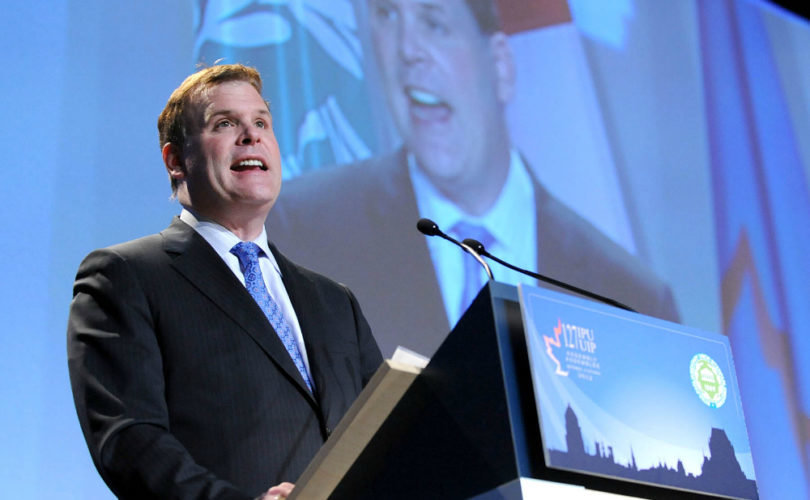 OTTAWA, February 4, 2015 (LifeSiteNews.com) – John Baird, a staunch pro-abortion and pro-homosexual cabinet minister in the Canadian government, but a strong defender of religious liberty internationally, has resigned.

Baird, 45, was a minister in the Ontario cabinet before joining the House of Commons in 2006 as Prime Minister Stephen Harper and the Conservative Party formed government. He held numerous cabinet posts, lastly as foreign minister.

Generally admired for taking strong positions against Russia in Ukraine and against religious persecution from the Middle East to Nigeria, Baird was also seen as one of the more co-operative of Harper’s ministers by opposition leaders, according to a story from the CBC.

But Baird is also rated by the Campaign Life Coalition as pro-abortion for his statements and voting record on life issues. On Motion 312, which would have required the House of Commons to reconsider the Criminal Code’s position that human beings begin at birth, he voted against.  On Bill C-510, which would have protected women from coercion to have abortions, he voted against again.

Described by LifeSiteNews in 2006 as a “gay activist,” he also voted for Bill C-279, which would have added “gender identity “ and “gender expression” to the Human Rights Act as classes protected, along with religion and ethnicity, from discrimination.

On the latest CLC questionnaire, he answered only one question: “If elected will you support measures to ensure informed decisions for women seeking abortion which include information on a) fetal development; b) physical and psychological complications; c) alternatives to abortion?” He answered, “Yes.”  But on an earlier questionnaire he described himself as “pro-choice.”

On the other hand, he voted against a Bloc Quebecois bill to legalize euthanasia and for the Unborn Victims of Crime Bill to criminalize the killing of an unborn child in the act of killing the mother.

As foreign affairs minister, Baird came under fire from REAL Women of Canada for sending $200,000 to homosexual activist groups in countries like Kenya and Uganda and for opposing a Russian law protecting minors from homosexual propaganda.

According to REAL Women, Baird was furthering “his own perspective on homosexuality.”

LifeSiteNews earlier reported that Baird told a gathering in Montreal that Canada will promote homosexual “rights” as a key component of foreign policy. “We’re working with allies like the EU and the United States on encouraging the decriminalization of homosexuality,” he said at that time.

Johanne Brownrigg of Campaign Life Coalition told LifeSiteNews, “John Baird was not an ally to the pro-life movement.” She noted, though, that as foreign affairs minister, “he was very supportive of minority Christians” under persecution in other countries. Not so much in Canada, however: he joined with other gay activists in attacking 100 Huntley Street, the popular Evangelical Christian TV network, “for expressing their sincerely held religious beliefs.” 100 Huntley Street was attacked for supporting Russia’s law restricting homosexual propaganda.

Baird indicated in his resignation speech he was tired of the partisanship and ideological position-taking in the House of Commons and ready for a different kind of life.