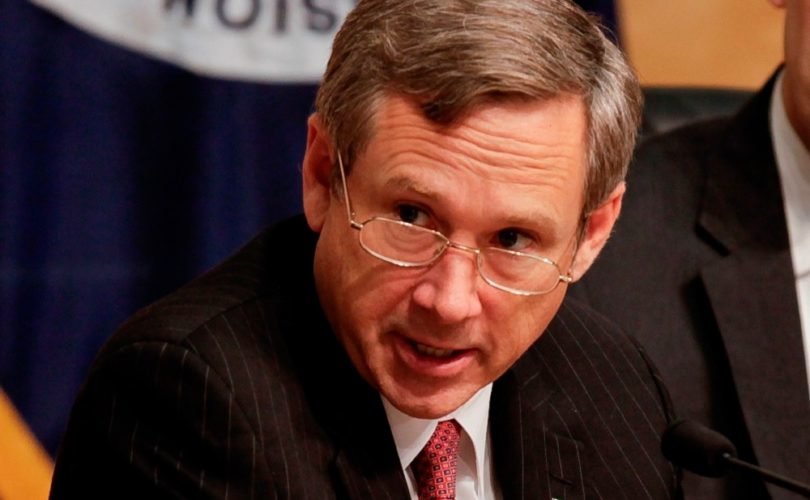 Incumbent Senator Kirk is running for re-election to a second term in office. He is officially affiliated with the Republicans, but he is a strong supporter of abortion and the abortion industry, having voted for tax dollars to fund abortion facilities worldwide.

Sen. Kirk voted in favor of minors traveling across state lines to obtain abortions. He co-sponsored a bill giving tax dollars for abortifacients for rape victims at all hospitals, including publicly funded ones. Kirk voted for expanding destructive embryonic stem cell research. He voted against making it a crime to harm a pre-born baby during the commission of another crime.

The National Abortion Rights Action League rated Kirk 100% pro-abortion. He even voted against funding crisis pregnancy centers, which help women and don't refer them for abortions.

In 2010, Kirk voted for the repeal of Don't Ask, Don't Tell policy regarding practicing, unrepentant homosexuals in the military. In 2013, Kirk supported same-sex “marriage.” Kirk is a cosponsor and strong supporter of pro-gay “non-discrimination” legislation, which would force businesses – even Christian-owned ones – to hire regardless of “sexual orientation and gender (self-) identity.”

James Marter, who runs an enterprise software company, is challenging Kirk. A Catholic married 30 years, Marter says he is running because “Senator Kirk's voting record is out of touch with Illinois values, especially due to his recent NO vote against the effort to stop funding Planned Parenthood.”

Marter told LifeSiteNews he has on more than one occasion joined pro-lifers in publicly standing for the sanctity of life. “I have four children, and two of them went to Aurora Central Catholic High School. One of the years, I went with my daughter and the school group to protest the Aurora Planned Parenthood before it was built.”

“I believe in our Faith and what the Church teaches. I've been pro-life all my life,” Marter told LifeSiteNews. “Recently, when I went to the 40 Days For Life prayer vigil at the Aurora Planned Parenthood to garner signatures on my petition to challenge Senator Kirk, I proudly held those signs.”

The Purdue graduate and successful business owner says he'll run because “there is little to distinguish Kirk from his fellow Democrats in the Illinois delegation.”

“Obamacare is a disaster, as far as religious liberty goes. It's a disaster economically, and for many other reasons,” Marter told LifeSiteNews.  “It's one of the issues in Washington we want to fix.”

Marter's website explains key differences in his conservative stands from Sen. Kirk's liberal positions. “Kirk has a history of opposing school choice, he has opposed almost every effort to significantly cut spending or balance the budget, and finally he is the only sitting Republican senator to have voted for Cap and Trade energy taxes.”

In contradistinction, Marter says, “I will vote to defund Planned Parenthood, and for pro-life legislation.” If elected, Marter says he will work in the Senate to balance the exploding U.S. budget, flatten and simplify the tax code, and repeal Obamacare.

The Kirk camp ignored Marter's decision to run, insisting that Kirk is the one whom the people want. It is significant that the highest ranking Republican leaders, including Gov. Bruce Rauner and Senate Majority Leader Mitch McConnell, support Kirk despite his extreme pro-abortion stands.

Congressman-turned-talk-show-host Joe Walsh noted that despite GOP backing, Kirk will not win. “The absolute disenchantment that rank-and-file Republicans have with Kirk is real. Everyone knows he can't win” his seat back in 2016, according to Walsh.