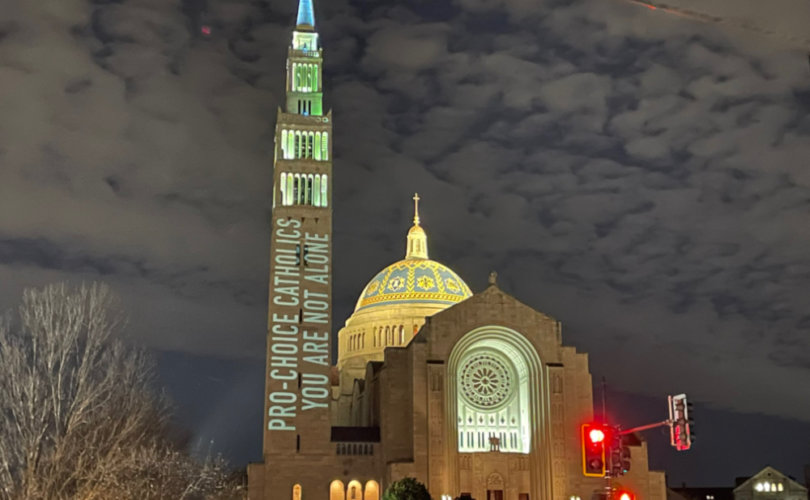 WASHINGTON D.C. (LifeSiteNews) – The pro-abortion group “Catholics for Choice” projected pro-abortion slogans onto the Basilica of the National Shrine of the Immaculate Conception last night, while pro-lifers inside were attending Mass and holding the National Prayer Vigil for Life.

The controversial group that identifies as Catholic used projectors to display slogans onto the DC Basilica last night prior to the annual March for Life, in a move publicized and defended by the group’s director of communication, Ashley Wilson.

Before the night gets too far away from me, let me say a bit about why @Catholic4Choice did what we did tonight. 🧵 (1/?) pic.twitter.com/vG0qHQg4EU

The slogans, projected onto the tower and above the main door, read “Pro-choice Catholics you are not alone,” while another stated “1 in 4 abortion patients is a Catholic.”

A third was in the form of a cross bearing the message “Pro-choice Catholics” in the upright and the beams of the cross.

So I’m outside the Basilica of the National Shrine of the Immaculate Conception in DC, and Catholics for Choice is here projecting messages onto the church in support of abortion rights.

The protest coincides with the basilica’s “prayer vigil for life,” happening inside. pic.twitter.com/0y1M7X9ByC

Another slogan in Spanish read “my body, choice.”

The dissident and misnomered group “Catholics for Choice” has been publicly disavowed by Catholic hierarchy time and again. “As the U.S. Catholic bishops have stated for many years, the use of the name ‘Catholic’ as a platform to promote the taking of innocent human life is offensive not only to Catholics, but to all who expect honesty and forthrightness in public discourse…It is funded by powerful private foundations to promote abortion as a method of population control.”

The Catholic Church has always taught the “moral evil of every procured abortion.” “This teaching has not changed and remains unchangeable,” reads the Catechism. “Direct abortion, that is to say, abortion willed either as an end or a means, is gravely contrary to the moral law.”

Catholic Twitter users have been quick to note this fact, with one commenting “There is no such thing as ‘Catholics for choice.’ It should be ‘Excommunicated Catholics for murder’.”

In a statement released to LifeSiteNews, D.C.’s Cardinal Wilton Gregory condemned the pro-abortion move as “antics.”

“The true voice of the Church was only to be found within The Basilica of the National Shrine of the Immaculate Conception last evening,” Gregory stated.

“There, people prayed and offered the Eucharist asking God to restore a true reverence for all human life. Those whose antics projected words on the outside of the church building demonstrated by those pranks that they really are external to the Church and they did so at night – John 13:30.”

But Wilson defended the move, saying “I know that my faith teaches Catholics to honor personal conscience. And yet, the Catholic hierarchy seeks to polarize pro-choice Catholics and villainize people who make the moral choice to have abortions.”

“I am tired of feeling shame and stigma for being a pro-choice Catholic. And I’m not here for people to judge my own personal relationship with God.”

Speaking to Aletia, John Becker, a spokesman for the group, stated that the protest was “all above board and we made sure we did everything by the book and respectfully.” The protest was conducted by a “small group of staff,” Becker said.

The group soon doubled down on the move, with a tweet claiming that “68% of Catholics want #RoeVWade to remain the law of the land,” but did not give evidence of such statistics.

FACT: 68% of Catholics want #RoeVWade to remain the law of the land. The #MarchForLife & @usccb want folks to think they speak for Catholics, but nothing could be further from the truth.

However, others were swift to condemn the stunt, with Bishop Joseph Strickland condemning the move as an “atrocity,” “horrible” and “evil.”

If this is real it is an atrocity. Support of murder projected on the Shrine of the Immaculate Conception??? I pray that it is a fake photo photoshopped for evil purposes. If it is real it is horrible & even faking it is evil. pic.twitter.com/C8LgRqXXLY

The attempted desecration is enormous. Diabolical. Mother Mary, pray for them, now and at the hour of death. Amen. https://t.co/F89HCPnHUS

Political campaign group uses religious building to mock the church and the beliefs of the people keeping vigil inside.

I’m not going to share the images, but please pray fervently for the repentance of those souls who projected demonic anti-Catholic messages on the walls of the National Basilica during tonight’s pre-March For Life prayer service.

LifeSiteNews contacted the National Basilica for comment as well as the Archdiocese of Washington, bus has not yet received a response .