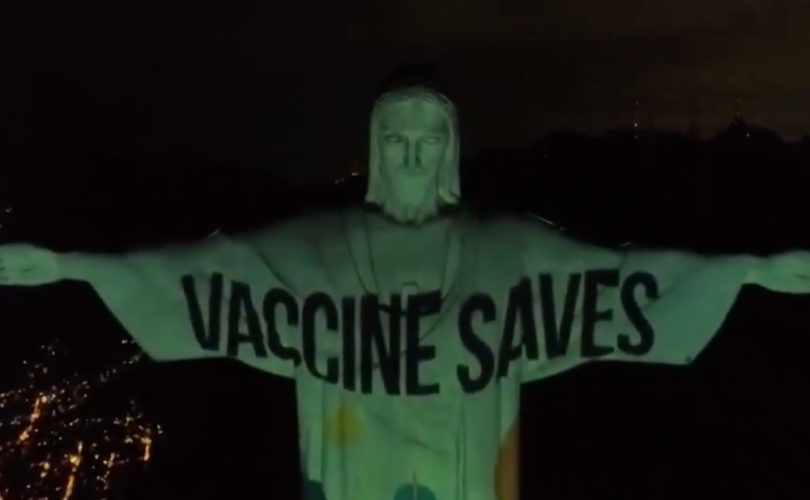 RIO DE JANEIRO, Brazil, May 18, 2021 (LifeSiteNews) — In what has been described as a “sacrilege,” the famous Christ the Redeemer statue in Brazil was illuminated on Saturday with a message promoting the abortion-tainted coronavirus vaccines.

The statue of Christ the Redeemer, situated on Corcovado mountain overlooking Rio de Janeiro, was the subject of a light display on May 15, when activist groups promoting the COVID-19 injections took the opportunity to push the injection with this act of propaganda.

Reuters reported that the event was executed by the pro-COVID injection group “Unidos Pela Vacina” (“United by the Vaccine”), and in partnership with the Cristo Redentor Sanctuary and the Ogilvy Brazil advertising agency.

Emblazoned across Christ’s extended arms were the words “vaccine saves,” in English and in Portuguese. Beneath this was the Portuguese phrase “unidos pela vacina,” meaning “united by the vaccine.”

Local media reports that the United by the Vaccine movement was the initiative of Luiza Helena Trajano, who chairs the feminist group “Mulheres do Brasil Group.” An inscription on the light show at the bottom of the statue reveals that the event was sponsored by the group.

Catholic Arena noted that the group also promotes abortion “rights” among its advocacy topics, pointing to a Facebook post which described a proposed law to provide funding to victims of rape in order to reduce abortions, as “a step backwards in the already acquired rights of women: that of legal abortion in the cases of rape.”

Video footage of the event shows masked members of the United by the Vaccine group, gathered beneath the statue, wearing t-shirts with the same image as was portrayed on the statue, raising their right hands in a Nazi style salute.

Given a pro-abortion group used the statue to promote the experimental and hastily developed injections, which are connected to abortion through their testing and development, the move has shocked many Catholics.

Eric Sammons, editor-in-chief of Crisis Magazine, pointed out the correlation between the COVID-19 agenda and the anti-religious spirit: “This demonstrates clearly why it’s frustrating when otherwise-solid Catholics get onboard the COVID train. You can argue masks are not a big deal, it’s only remote cooperation, etc., but Catholics need to see that it’s all part of an anti-religious, anti-liberty whole.”

#GodAloneSaves Let's make this trend, as a reminder to those who have profaned the statue of Our Lord in Rio de Janeiro! pic.twitter.com/wW9mQ5bZWP

Others expressed a stronger feeling, with Joshua Charles, former speech writer for Vice President Mike Pence, writing simply: “The biggest statue of Christ the King, illuminated not with ‘Christ Saves,’ but with ‘Vaccine Saves.’ Sacrilege. And creepy as hell.”

Meanwhile, author and commentator Deacon Nick Donnelly observed the inversion of order between man and God, making allusions to the advent of the anti-Christ: “‘The supreme religious deception is that of the Antichrist, a pseudo-messianism by which man glorifies himself in place of God and of his Messiah come in the flesh.’ (CCC 675)”

Donnelly further described it as “the graffiti of the antichrist.”

The graffiti of the antichrist pic.twitter.com/qlF4TJNLr8

Speaking to LifeSiteNews in January, vaccine researcher Pamela Acker described the manner in which the injections are connected to abortion.

She noted that the aborted babies involved in the vaccines are dissected alive in order to be used: “The babies are still alive when the researchers start extracting the tissue; to the point where their heart is still beating, and they’re generally not given any anesthetic, because that would disrupt the cells that the researchers are trying to extract.”

“So, they’re removing this tissue, all the while the baby is alive and in extreme amounts of pain. So, this makes it even more sadistic.”