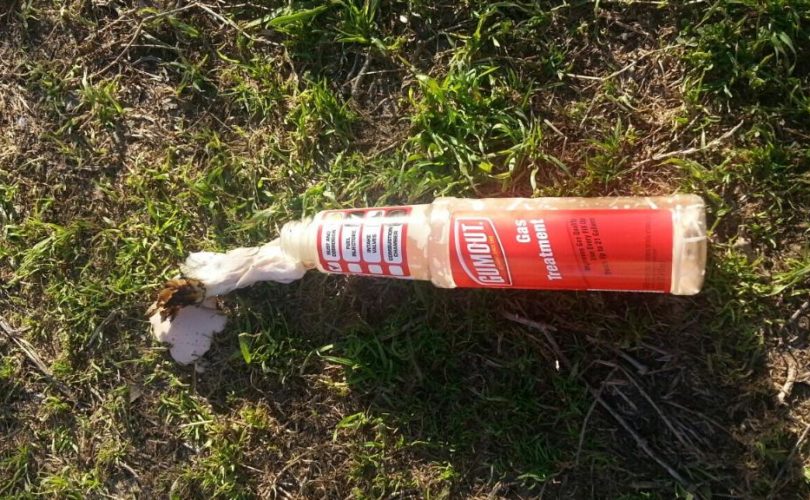 Courtesy of Texas Coalition for Life

Update March 25, 2015: After this story was published, the CEO of Planned Parenthood of Greater Texas issued a statement condemning the alleged attack.

“Planned Parenthood does not believe violence gets us anywhere. We believe that there needs to be a respectful dialogue among individuals with differing opinions and we should always work together as best we can to further access to healthcare. Our community needs more access to care not less,” Ken Lambrecht told MyFoxAustin.com.

AUSTIN, TX, March 24, 2015 (LifeSiteNews.com) – Pro-life activists are reacting with calm to news that a woman threw a Molotov cocktail at a group of sidewalk counselors outside an Austin abortion facility last night. But pro-abortion groups are not reacting at all.

Eyewitnesses say Melanie Maria Toney, 52, threw the explosive out of her car window at pro-life advocates as they prayed as part of the 40 Days for Life vigil, but they were able to stomp out the fire before the bottle exploded.

The Central Texas Coalition for Life reported the attack – and the fact that the woman had been arrested – last night. Toney has been charged with aggravated assault.

Despite the potentially incendiary incident, David Bereit, the national director of 40 Days for Life, emphasized that praying for or counseling abortion-minded women at abortion facilities is safe. Of the campaign's 251 locations in the United States and 19 other countries, this is the only one that has reported any form of violence.

“We're grateful to the local 40 Days for Life leadership in Austin for handling this matter in a calm, rational fashion and their concern for the safety of all involved,” Bereit said. “We also commend the Austin 40 Days for Life volunteers who have not been dissuaded by this action, and are pressing on in their peaceful vigil outside the Planned Parenthood abortion center…to demonstrate that the antidote to all violence — including the violence of abortion — is peace, prayer, and love.”

Bereit has often said the best opposition to abortion is a prayerful and serene presence outside abortion facilities.

Joe Pojman, Ph.D., the executive director of the Austin-based Texas Alliance for Life, told LifeSiteNews that one of his organization's interns was present at the incident.

“We cannot with integrity claim that the woman who threw a flaming bomb at a Texas Alliance for Life intern, who was peacefully praying outside of a Planned Parenthood abortion facility, is representative of anyone other than herself,” Pojman told LifeSiteNews.

He said the incident proves that “the pro-life movement is making a difference in saving the lives of innocent, unborn children. Texas has passed historic laws to protect the lives of women and unborn children, but there is still more to be done to change hearts and minds.”

It is pro-life successes that drive the abortion industry to suppress the other side – by any means necessary.

“Some abortion supporters don't want to give space to those in the pro-life movement who simply want to peacefully exercise their viewpoint by praying and lovingly reaching out to women-in-crisis, so they respond with violence,” Lauren Muzyka, executive director of Sidewalk Advocates for Life, told LifeSiteNews.

LifeSiteNews also asked the nation's leading abortion advocacy organizations – Planned Parenthood, Planned Parenthood of Greater Texas, NARAL Pro-Choice America, the Center for Reproductive Rights, the National Organization for Women, and EMILY's List – if they condemned the attack or would discourage similar actions from others in their movement.

Although the pro-life movement is regularly branded as a domestic terrorist threat, pro-abortion activists have a history of attacking peaceful demonstrators exercising their First Amendment rights on behalf of life.

In April 2012, a man approached pro-life counselors reading the Bible and slashed their pro-life signs with two hunting knives on the sidewalk outside an abortion facility in Jackson, Mississippi. The following November, a man threatened to shoot a pro-life counselor outside an abortion facility in Wichita, Kansas. In 2012, vandals attacked and vandalized the home of the Mason family, founders of Personhood USA.

Pro-life activists have released footage of filmed attacks on pro-lifers in New Mexico and Washington.

“As peaceful pro-life citizens, we will never stand for violence or be deterred from our mission to help mothers and children,” Muzyka told LifeSiteNews.

Some say that overt violence is the natural progression of pro-abortion behavior.

“We have increasingly witnessed brutish hostility from the anti-life crusade, not only toward pro-life principles, but toward the brave advocates who promote the message of life,” Melissa Conway, the director of external relations at Texas Right to Life, told LifeSiteNews.

She said the pro-abortion activists' behavior has escalated “from chanting 'Hail Satan' in the Capitol” in the summer of 2013 to “bombing pro-life prayer warriors outside of abortion mills.”

Conway said “the anti-life campaign reflects their blatant disrespect for human life and proves that their agenda takes precedence over exhibiting any form of civility.”