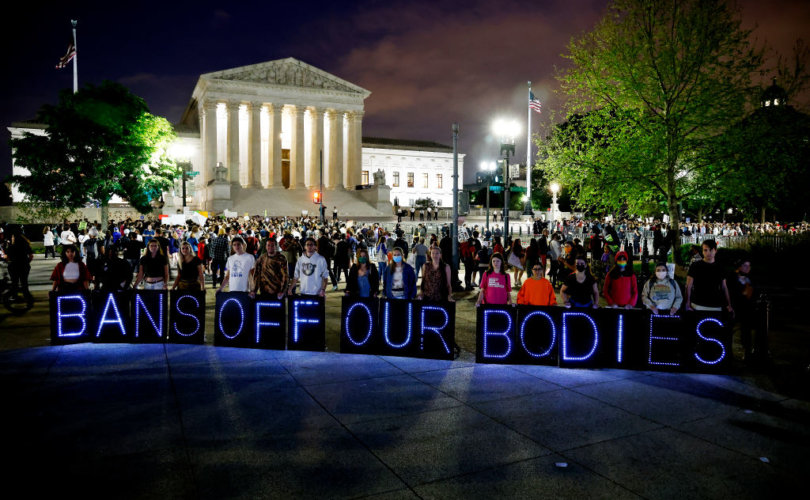 Pro-abortion protestors outside the Supreme Court of the United States on May 03, 2022 in Washington, DC. Paul Morigi/Getty Images for MoveOn

(LifeSiteNews) — Abortion activists are threatening to storm Catholic churches during Mass starting this coming Sunday and protest outside the houses of six of the nine U.S. Supreme Court Justices in opposition to a possible overturning of Roe v. Wade.

A radical abortion group called “Ruth Sent Us,” named after the former pro-abortion justice Ruth Bader Ginsburg, took to Twitter last Tuesday to encourage people across the U.S. to storm their local parish starting on Sunday, May 8 – which is Mother’s Day in the U.S. – as a way to protest a possible overturning of Roe v. Wade by six Supreme Court justices, as was revealed in a leak last Monday.

The protests are anticipated to last all week, from May 8 through 14.

“Whether you’re a ‘Catholic for Choice’, ex-Catholic, of other or no faith, recognize that six extremist Catholics set out to overturn Roe,” the group tweeted. “Stand at or in a local Catholic Church Sunday May 8.”

Whether you’re a “Catholic for Choice”, ex-Catholic, of other or no faith, recognize that six extremist Catholics set out to overturn Roe. Stand at or in a local Catholic Church Sun May 8. #WarOnWomen #MothersDayStrike pic.twitter.com/v2vtpd12Gp

The tweet was accompanied by a video showing members of the group dressed in Handmaid’s Tale costumes and disrupting a Mass in a Catholic church by shouting a pro-abortion chant, demanding “abortion on demand and without apology!”

In another video published on Tik Tok, the activists are seen walking towards the doors of the church.

“Sometimes as***les need a beating so they know ‘go be that somewhere else’ … Church! During Mass!” the video stated.

A third video posted on Twitter showed members of the same group, still dressed in Handmaid’s Tale costume, interrupting another Sunday Mass and standing in front of the sanctuary brandishing anti-Catholic, anti-life signs.

“For 2,000 years the Catholic Church has been an institution for the enslavement of women!” one them is heard shouting.

There are calls for a #MothersDayStrike. We support it, along with @StrikeForChoice who’s planning a day of walk-outs on Thu May 12. #DefendRoe

This is what Mother’s Day should look like. Catholic and Evangelical Churches nationwide: pic.twitter.com/BxvGhBGodn

“Our 6-3 extremist Supreme Court routinely issues rulings that hurt women, racial minorities, LGBTQ+ and immigrant rights. We must rise up to force accountability using a diversity of tactics,” a statement posted on the group’s website reads.

A map displayed below the statement shows the locations of the six justices’ homes around Washington, D.C., with an announcement for an upcoming protest.

At the homes of the six extremist justices, three in Virginia and three in Maryland.

Ever since a Supreme Court draft majority opinion to overthrow Roe v. Wade was leaked on Monday, threats of violence from pro-abortion activists against Supreme Court justices have been multiplying.

On Thursday, a verified Twitter user in the U.K. suggested killing pro-life Justices Clarence Thomas and Samuel Alito in two separate tweets before removing them.

Acts of violence and vandalism have also multiplied across the U.S. On Tuesday, a violent and vulgar protest by pro-abortion activists in Los Angeles resulted in at least one police officer being injured and parts of city being vandalized with obscene graffiti.

The next day, a Catholic church in Boulder, Colorado, was vandalized with pro-abortion graffiti.