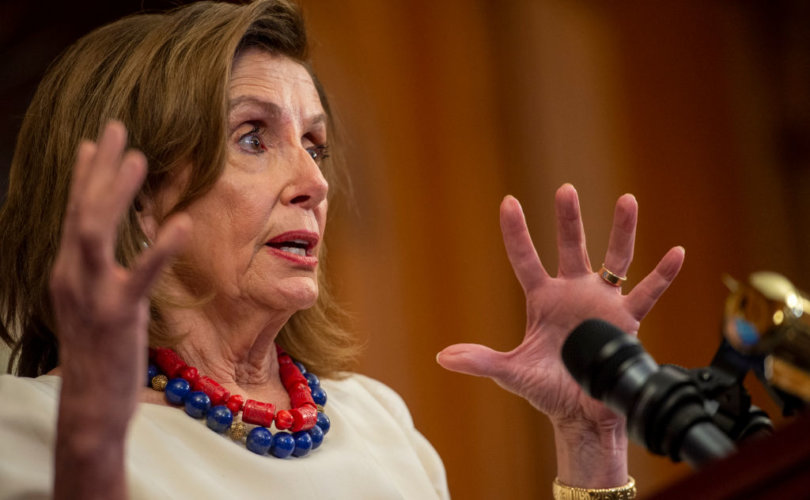 WASHINGTON, D.C (LifeSiteNews) — A leaked opinion of the ruling in Dobbs v. Jackson shows that Justice Samuel Alito and at least four other justices are ready to reverse Roe v. Wade and Planned Parenthood v. Casey and return the issue of abortion to the states.

Pro-abortion groups and politicians were quick to respond, with some saying the Supreme Court (SCOTUS) had lost all legitimacy and others warning of what life will be like in a post-Roe America.

Senate Majority Leader Chuck Schumer and Speaker of the House Nancy Pelosi reportedly said the ruling would “inflict the greatest restriction of rights in the past fifty years – not just on women but on all Americans.”

“The Republican-appointed Justices’ reported votes to overturn Roe v. Wade would go down as an abomination, one of the worst and most damaging decisions in modern history,” the two Congressional Democratic leaders said, according to Politico reporter Marianne Levine. “Several of these conservative Justices, who are in no way accountable to the American people, have lied to the U.S. Senate, ripped up the Constitution and defiled both precedent and the Supreme Court’s reputation.”

3/ “Several of these conservative Justices, who are in no way accountable to the American people, have lied to the U.S. Senate, ripped up the Constitution and defiled both precedent and the Supreme Court’s reputation “

Senator Chuck Schumer previously threatened Justices Neil Gorsuch and Brett Kavanaugh in 2020, before a case concerning a Louisiana abortion law. “I want to tell you, Justice Kavanaugh and Justice Gorsuch, you have unleashed a whirlwind, and you will pay the price,” Sen. Schumer said outside of the court during oral arguments. “You won’t know what hit you if you go forward with these awful decisions.”

NARAL Pro-Choice America said the draft opinion is an “ominous and alarming sign yet that our nation’s highest court is poised to overturn Roe v. Wade, ending the constitutional right to abortion as we know it and ripping away our freedom to decide if, when, and how to raise our families.”

The nation’s largest abortion vendor said the country is at “a crisis moment.”

“While abortion is still legal, tonight’s report makes clear that our deepest fears are coming true,” Planned Parenthood tweeted. “We have reached a crisis moment for abortion access.”

Its CEO Alexis McGill Johnson said the opinion is “dangerous” and said Planned Parenthood is “fighting like hell.”

The National Abortion Federation echoed these sentiments. “[The] reported leaked draft opinion appears to confirm abortion advocates’ worst fears come true; we have been bracing for this horrific moment,” Chief Program Officer Melissa Fowler stated. “This decision—if published as final—will gut access in half of the country and will have an absolutely devastating impact on those in need of essential abortion care in many parts of the country.”

Other Democratic politicians called for Congress to pass a law codifying Roe v. Wadefailed. A similar attempt earlier this year.

Let’s be clear: The right to an abortion is sacred.

Democrats have to act quickly – get rid of the filibuster to pass the Women’s Health Protection Act + finally codify Roe into law.

We cannot afford to wait.

The 50-year precedent set by Roe v. Wade is on the verge of being overturned.

If reports are true, SCOTUS’ opinion would have catastrophic consequences for millions of Americans. We will not be pulled backward—we must codify Roe now.

Senator Ed Markey (D-MA) said this is proof of the need to pack the Supreme Court with more justices.

“A stolen, illegitimate, and far-right Supreme Court majority appears set to destroy the right to abortion, an essential right which protects the health, safety, and freedom of millions of Americans,” Sen. Markey tweeted. “There is no other recourse. We must expand the court.”

A stolen, illegitimate, and far-right Supreme Court majority appears set to destroy the right to abortion, an essential right which protects the health, safety, and freedom of millions of Americans. There is no other recourse. We must expand the court.