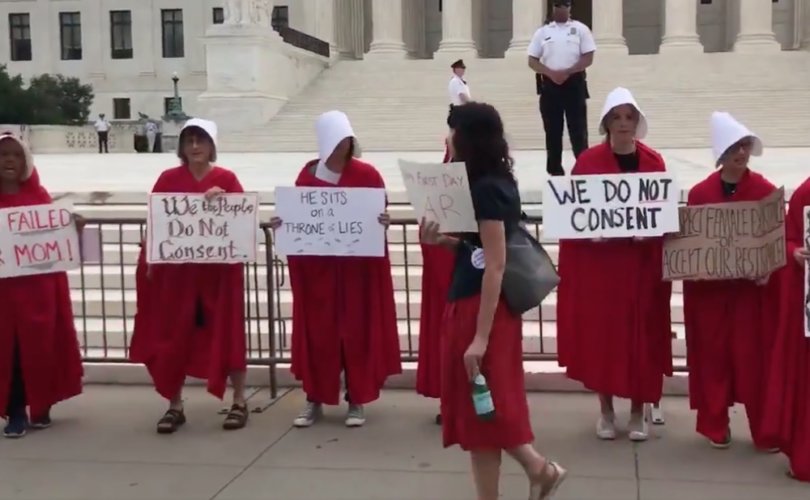 WASHINGTON, D.C., October 10, 2018 (LifeSiteNews) – As Justice Brett Kavanaugh assumed his seat during his first session of oral arguments at the U.S. Supreme Court on Tuesday, left-wing protesters outside continued their efforts to paint him as some sort of patriarchal menace.

The Senate voted 50-48 on Saturday to confirm Kavanaugh after a bitter three-month battle over his abortion views and unsubstantiated, last-minute allegations of sexual assault. He was officially sworn in hours later at a private ceremony, then publicly Monday evening at the White House.

The Associated Press depicts Kavanaugh’s first day as cordial and routine. Chief Justice John Roberts wished Kavanaugh “a long and happy career in our common calling,” the new Justice was seen chatting and shaking hands with Justice Elena Kagan, and the audience included Kavanaugh's wife and two daughters, as well as his predecessor, retired Justice Anthony Kennedy. Kavanaugh also participated in the questioning of both sides of the case at hand, which concerned prison sentencing.

Outside the building, however, protesters showed up to continue their opposition. Some of the demonstrators wore the red robes of the 1985 novel and 2017 Hulu drama The Handmaid’s Tale, Breitbart notes. The fictional series depicts a dystopian future in which women are enslaved and raped to bear children for their rulers. Pro-abortion activists have seized on the show to provoke fear that legally protecting preborn babies somehow amounts to controlling women and would somehow invite further coercion.

“I’ve grown close to both Catholics and Protestants doing pro-life advocacy. Nothing shown in The Handmaid’s Tale is remotely like what pro-life Christians believe, fight for, or want to enshrine in law,” LifeSiteNews’ Claire Chretien wrote last year. “Rape, adultery, surrogacy, and the subversion of parental rights are deeply embedded in [the story’s] society. Pro-life Christians are the ones fighting against all of these evils today.”

Nevertheless, Tuesday’s protesters held signs with messages including “You Failed Your Mom,” “Believe Survivors,” “We Do Not Consent,” and “He Sits on a Throne of Lies.” They also chanted “Say it loud and say it clear, Kavanaugh’s not welcome here.” A few pre-teen children can be seen among the crowd. A police barricade prevented protesters and other civilians from ascending the building’s steps.

Look who is here for Justice Kavanaugh’s first day at #SCOTUS. pic.twitter.com/6SN9kL5Viw

Left-wing demonstrations against Kavanaugh have been intense since long before Christine Blasey Ford’s sex-assault claims complicated his confirmation battle. Protesters, many sent by the “feminist” group Women’s March, frequently interrupted the Senate Judiciary Committee’s hearings with screams. The weekend's Capitol Hill protests included sobbing, unintelligible screaming, shouts of “you are subhuman” and “we’re done being polite” directed at pro-Trump counter-protesters, shouts of “F*** YOU” and middle fingers aimed at a motorcade carrying public officials, and a group of protesters chanting “shut it down” as they pounded at – and tried to open – locked Supreme Court doors during Kavanaugh’s swearing-in.

Such incidents are the latest in a rising tide of left-wing harassment this year, epitomized by California Democrat Rep. Maxine Waters’ infamous threat that Trump administration officials “won’t be able to go to a restaurant, they won’t be able to stop at a gas station, they’re not going to be able to shop at a department store.” Recently, anti-Kavanaugh protesters chased and screamed at multiple GOP lawmakers passing through Reagan National Airport, while other Republicans report being harassed and assaulted in the halls of Senate office buildings.

Some of these activities appear to be following the lead of prominent Democrat and pro-abortion figures. Sen. Cory Booker, D-NJ, has previously advised leftists to “get up in the face of some congresspeople,” while Sen. Mazie Hirono refused to say Sunday that following Republicans to their homes or restaurants crosses a line.

Contrary to the Handmaid protesters' narrative, how Kavanaugh will rule on abortion and contraception remains to be seen. Pro-abortion Sen. Susan Collins, R-ME, says she's confident he would uphold Roe v. Wade out of reverence for judicial precedent, and while Kavanaugh sided with Priests for Life against the Obama administration's contraception mandate on the D.C. Court of Appeals, his ruling agreed that the government has a “compelling interest in facilitating access to contraception for the employees of […] religious organizations.”