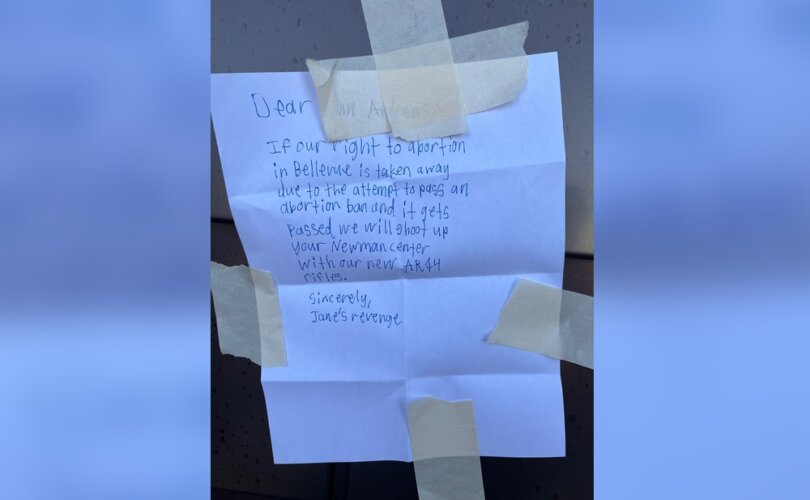 OMAHA, Nebraska (LifeSiteNews) – Abortion activists will “shoot up” the St. John Paul II Newman Center at the University of Nebraska Omaha (UNO) “if our right to abortion…is taken away,” according to a note signed “Jane’s Revenge.”

The note was discovered on the Newman Center’s oratory door on Saturday morning and was addressed to Father Dan Andrews, the ministry’s pastor and director.

“If our right [sic] to abortion in Bellevue is taken away due to the attempt to pass an abortion ban and it gets passed we will shoot up your Newman center with our new AR14 rifles,” the note threatened.

“Sincerely, Jane’s Revenge,” it was signed.

…Abortion Free Cities to shut down the late-term abortion facility in the state.

When we arrived, a death threat via guns from Jane’s Revenge was posted on the door.

We’ve called the police and are scrambling to make it safe. pic.twitter.com/J8dJrnKjmy

“UNO Police promptly arrived on the scene and are investigating the threat,” the St. John Paul II Newman Center wrote in a press released. “Additional law enforcement agencies, including Omaha Police, are involved.”

Andrews “called the note unsettling and unfortunate and said his Christ-centered residents and parishioners are undeterred,” the press release said.

“This obviously causes us great concern. Our number one priority is the safety of our students,” said Andrews. “We are thankful for UNO Police’s prompt response and attention to this threat.”

A press release from the university added that the “Newman Center and campus are maintaining normal operations” while “the Omaha Police Department and Douglas County Sheriff’s Office are working closely with UNO Public Safety to investigate the threat and provide increased security for the area to promote the safety of Newman Center students and staff.”

Those with further information about the incident are “encouraged to contact UNO Public Safety.” Details of how to do so can be found on the department’s website.

In October, the residents of Bellevue circulated a petition to enact a local abortion ban in its town, hoping that the efforts would encourage a statewide ban. This action took place alongside six other small towns in the state, each aiming to ban abortion within their jurisdictions, as previously reported by LifeSiteNews. The petitions were scheduled to be voted on in November.

Following the threat, pro-life leaders have responded by calling for accountability from law enforcement, demanding action be taken against Jane’s Revenge for the many attacks against pro-life clinics and churches for which it has claimed responsibility.

“We are headed towards tragedy if AG Merrick Garland continues to refuse to act to protect peaceful pro-lifers from pro-abortion terrorist groups,” Hawkins wrote on Twitter. “The Biden Administration is laying the groundwork for deadly violence against pro-lifers while they support violence against those in the womb. They must act.”

…is case in point the poisoned political climate being deliberately fostered by corporate abortion and their allies.

Additionally, Republican Gov. Pete Ricketts posted on Twitter, announcing that “since May, pregnancy resource centers and pro-life organizations have been threatened, vandalized, and even firebombed with Molotov cocktails. It’s domestic terrorism, plain and simple.”

“To-date, @JoeBiden’s DOJ has failed to prosecute a single one of these attacks,” Ricketts continued. “Instead, they’re busy going after parents who attend school board meetings. The DOJ must begin holding those threatening and attacking pro-life organizations accountable.”

To-date, @JoeBiden‘s DOJ has failed to prosecute a single one of these attacks. Instead, they’re busy going after parents who attend school board meetings. The DOJ must begin holding those threatening and attacking pro-life organizations accountable.

Following the leaked draft opinion from the Supreme Court in May, attacks against pro-life clinics and churches took place across the country throughout the summer, many of which were carried out by “Jane’s Revenge.” In September, the FBI claimed that the investigation of these acts of violence was ongoing, but said that no arrests had been made in connection to attacks by Jane’s Revenge.

— Article continues below Petition —
Stand with pro-life Catholic dad of 7 raided by Joe Biden's FBI
Show Petition Text
7544 have signed the petition.
Let's get to 9000!
Thank you for signing this petition!
Add your signature:
Show Petition Text

The most detail provided by the federal agency regarding pro-abortion violence was the release of part of a video and some photos from a firebombing attack on a pro-life pregnancy center, at which time the FBI also indicated that those responsible for this attack could be charged with violations of the Freedom of Access to Clinic Entrances (FACE) Act. The Biden administration has charged more than a dozen peaceful pro-life activists under FACE, however, including Mark Houck, who was arrested by armed FBI agents in front of his terrified young children.

As LifeSiteNews reported in November, the state of Nebraska moved closer to protecting the unborn from abortion with the increase of Republican majority in the state legislature after the midterm elections. In August, Republicans did not pursue a 12-week abortion ban due to a lack of votes necessary for overcoming a filibuster. However, with the increase in Republican majority, a filibuster will not pose the same obstacles for passing pro-life legislation in the future.

FBI won’t say if it has arrested anyone for attacking, threatening pro-life pregnancy centers