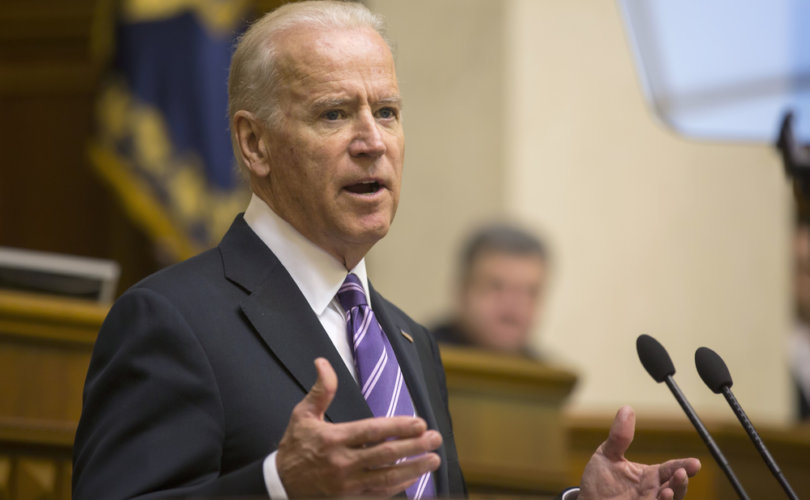 The 76-year-old Biden opened his announcement by recalling the 2017 violence between white supremacists and Antifa members in Charlottesville, Virginia, using the incident to falsely accuse President Donald Trump of claiming there were “some very fine people on both sides.” (In fact, Trump had said there were “fine people” on both sides of the question of tearing down Confederate historical monuments, and stressed, “I’m not talking about the neo-Nazis and white nationalists because they should be condemned totally”).

“We are in the battle for the soul of this nation,” Biden declared. “I believe history will look back on four years of this president and all he embraces as an aberrant moment in time. But if we give Donald Trump eight years in the White House, he will forever and fundamentally alter the character of this nation — who we are — and I cannot stand by and watch that happen.”

Conservatives argue that Biden’s own political values would present a far starker challenge to the soul of the nation. He began his Senate career as a relative moderate on abortion, but by the mid-2000s generally voted in lockstep with Planned Parenthood and NARAL. As former President Barack Obama’s running mate, Biden spent eight years in what was arguably the most pro-abortion administration in American history.

Biden, who claims to be an observant Catholic, told America Magazine in 2015 that he was “prepared to accept as a matter of faith” that “at the moment of conception there's human life and being,” but wasn’t prepared to “impose” a “rigid” or “precise” view on abortion that was “born out of my faith” (ignoring that science is equally conclusive on when life begins).

During a 2011 speech before a Chinese audience, Biden went so far as to assure them that while China’s one-child policy was unsustainable, he “fully understand[s]” and was “not second-guessing” the practice of forcing families into abortion and sterilization.

Biden’s presidential aspirations hit a snag last month when Lucy Flores, the 2014 Democrat nominee for Lieutenant Governor of Nevada, accused him of grabbing her shoulders, sniffing her hair, and kissing the back of her head at a campaign event, all without her consent. The charge (which the Biden camp claimed not to recall) invited the media to review Biden’s long history of inappropriate touching of women.

Notably, left-wing voices and media outlets were among those scrutinizing the former vice president this time around, with Vox’s Laura McGann admitting that the mainstream media previously downplayed such incidents as “just Joe being Joe.”

Part of difference is that Joe Biden is now perceived as insufficiently-liberal by some elements of 2019’s Democrat Party, particularly as a white man running against multiple female and minority candidates. Biden ran afoul of such activists again last month when they attacked him for calling Vice President Mike Pence a “decent guy,” which Biden quickly retracted by declaring, “there is nothing decent about being anti-LGBTQ rights.”

Even so, Biden still dominates the Democrat primary field at the moment, and polls formidably against Trump. RealClearPolitics’ polling average puts him in a 6.3-point lead over his closest competitor, socialist Vermont Sen. Bernie Sanders. National one-on-one polls between Biden and Trump taken over the past month consistently have Biden leading by anywhere from 5 to 13 points.