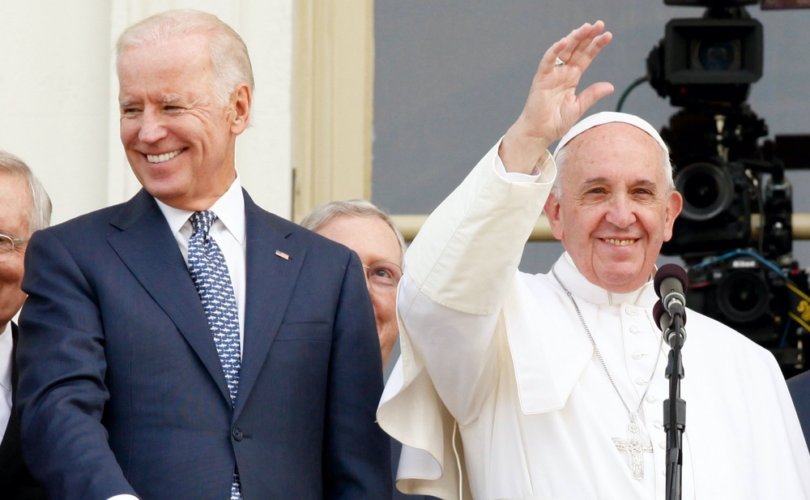 November 1, 2019 (LifeSiteNews) – Pro-abortion former Vice President and 2020 Democratic hopeful Joe Biden has commented on a priest recently upholding Catholic teaching by denying him Holy Communion, saying, “It’s not a position that I’ve found anywhere else, including from the Holy Father, who gives me Communion.”

The Catholic Church teaches that the Eucharist is the literal body, blood, soul, and divinity of Jesus Christ and therefore may only be received by practicing Catholics in a state of grace. Additionally, Canon 915 of the Catholic Code of Canon Law says that those who “obstinately” persevere “in manifest grave sin are not to be admitted to Holy Communion.”

The scandal created by giving pro-abortion politicians Holy Communion is one familiar to most faithful Catholics in the West, where Canon 915 – and many other parts of the Code of Canon Law – is nearly universally ignored by clergy and prelates.

In a short interview with PBS News Hour, Biden said his being denied Communion is a “private matter.”

“It’s the only time it’s ever happened,” he said.

He also accused Fr. Morey of bringing the story to the press and said Pope Francis gives him Holy Communion.

The platform on which Biden is running for president also includes a suggestion that doctors who refuse to commit abortions be punished and would “weaponize the Justice Department against states to strike down popular pro-life laws — like health and safety standards for abortion facilities, waiting periods, and parental involvement laws — and stop them from passing new ones,” Susan B. Anthony List President Marjorie Dannenfelser explained in a July piece in The Washington Times.

As Vice President, the first “wedding” Biden officiated was between two men.

“Sadly, this past Sunday, I had to refuse Holy Communion to former Vice President Joe Biden,” Fr. Morey told the Florence Morning News.

“Holy Communion signifies we are one with God, each other and the Church,” he continued. “Our actions should reflect that.”

“Any public figure who advocates for abortion places himself or herself outside of Church teaching.”

LifeSiteNews has reached out to the Vatican press office for comment, and will update this story upon receiving one. LifeSiteNews notes that Italy is five hours ahead of the U.S. and this story is being published at 6:40 p.m. EST.