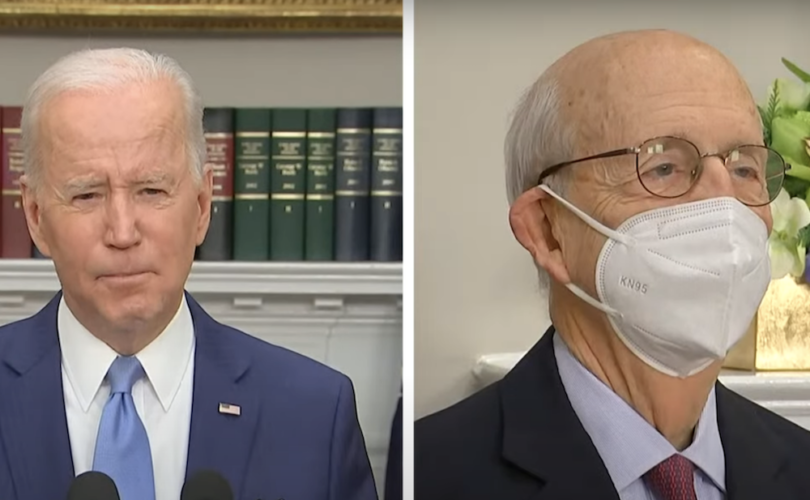 WASHINGTON (LifeSiteNews) — Left-wing Justice Stephen Breyer formally confirmed his retirement from the U.S. Supreme Court on Thursday, a day after the news leaked to the press.

“I intend this decision to take effect when the Court rises for the summer recess this year (typically late June or early July) assuming that by then my successor has been nominated and confirmed,” Breyer, 83, told President Joe Biden in a letter notifying him of his decision. “I enormously appreciate the privilege of serving as part of the federal judicial system — nearly 14 years as a Court of Appeals Judge and nearly 28 years as a Member of the Supreme Court. I have found the work challenging and meaningful.”

“I’m here today to express the nation’s gratitude to Justice Stephen Breyer for his remarkable career in public service and his clear-eyed commitment to making our nation’s laws work for its people,” Biden subsequently declared from the White House. “He has patiently sought common ground and built consensus, seeking to bring the court together. I think he’s a model public servant at a time of great division in this country. Justice Breyer’s been everything his country could have asked of him.”

Breyer was appointed by President Bill Clinton in 1994 and is the Court’s oldest member. During his time on the Court, he has been a reliable liberal and pro-abortion vote; notably, Ian Millhiser at the left-wing Vox observed Thursday that “Breyer never explained how he squared his full-throated support for abortion rights with his general view that judges should defer to democratically elected lawmakers.”

According to Fox News’ Shannon Bream, Breyer hadn’t intended to go public with his decision Wednesday, and that the leak forced his hand to an extent:

A bit more clarity. I'm told Justice Breyer had firmly decided on his own to retire and that an announcement was due very soon. And while it appears someone jumped the gun on that, better to characterize him as surprised by events today than "upset".

Regardless, the news sets the stage for the first Supreme Court confirmation battle of Biden’s term. The president reiterated Thursday that his nominee “will be someone with extraordinary qualifications, character, experience and integrity. And that person will be the first Black woman ever nominated to the United States Supreme Court. It’s long overdue in my view. I made that commitment during the campaign for president, and I will keep that commitment.”

Senate Majority Leader Chuck Schumer said Wednesday that the pick “will be considered and confirmed by the full United States Senate with all deliberate speed”; Senate Minority Leader Mitch McConnell said Thursday that Biden “must not outsource this important decision to the radical left. The American people deserve a nominee with demonstrated reverence for the written text of our laws and our Constitution.”

Left-wing activists have clamored for Breyer’s retirement for months so Biden could replace him with a younger like-minded jurist and prevent the possibility of a future Republican president using his vacancy to move the Court rightward. The eventual nominee will not move the Court in a more left-wing direction, but will ensure that the seat remains filled by a liberal for potentially decades to come.