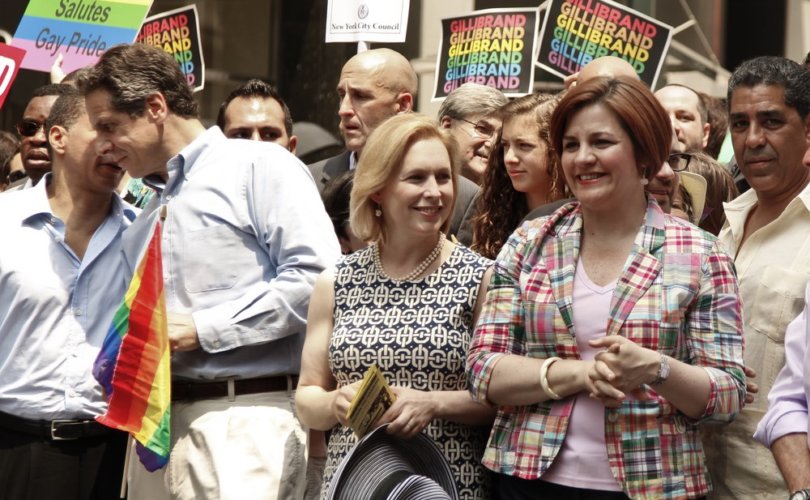 March 18, 2019 (LifeSiteNews) – New York Sen. Kirsten Gillibrand is the latest Democrat to formally join the field of candidates hoping to oust President Donald Trump from the White House in 2020.

Gillibrand had already formed an exploratory committee for a potential presidential run, but made her candidacy official with an announcement over the weekend, CNN reports.

“We need to remember what it feels like to be brave,” Gillibrand said. “We launched ourselves into space and landed on the moon. If we can do that, we can definitely achieve universal health care. We can provide paid family leave for all, end gun violence, pass a Green New Deal, get money out of politics, and take back our democracy. None of this is impossible.”

Gillibrand’s views offer little distinction from the other primary contenders. She holds 100 percent pro-abortion ratings with Planned Parenthood and NARAL, has called the prospect of the Supreme Court overturning Roe v. Wade and letting states decide their own abortion laws “literally the biggest civil rights issue, certainly in my lifetime, for women,” and supported Planned Parenthood while declaring she wouldn’t watch the undercover videos revealing its sale of aborted baby parts.

Most recently, Gillibrand voted against legislation that would have required abortionists to transfer newborns to hospitals for medical care if they are delivered alive following attempted abortions. Trump predicted it would be “remembered as one of the most shocking votes in the history of Congress,” because if “there is one thing we should all agree on, it’s protecting the lives of innocent babies.”

Gillibrand also came under fire in November 2017, a year after Trump defeated Democrat nominee Hillary Clinton, when she told the New York Times that President Bill Clinton should have resigned after it came out that he had a sexual affair with White House intern Monica Lewinsky. In light of Gillibrand’s history with the Clintons, including touting appearances with the former president while on the campaign trail for his wife, conservatives accused her of disavowing the Clintons for expediency only after their political utility had expired.

.@BillClinton & I stopped for coffee in #Pulaski, #NY, spoke w/New Yorkers about why we support @HillaryClinton! pic.twitter.com/YJ0V8n067a

Gillibrand currently polls at or below one percent in the most recent Democrat primary polls compiled by RealClearPolitics, while the field is led by declared candidates Sen. Bernie Sanders and Sen. Kamala Harris, and a potential run by former Vice President Joe Biden.