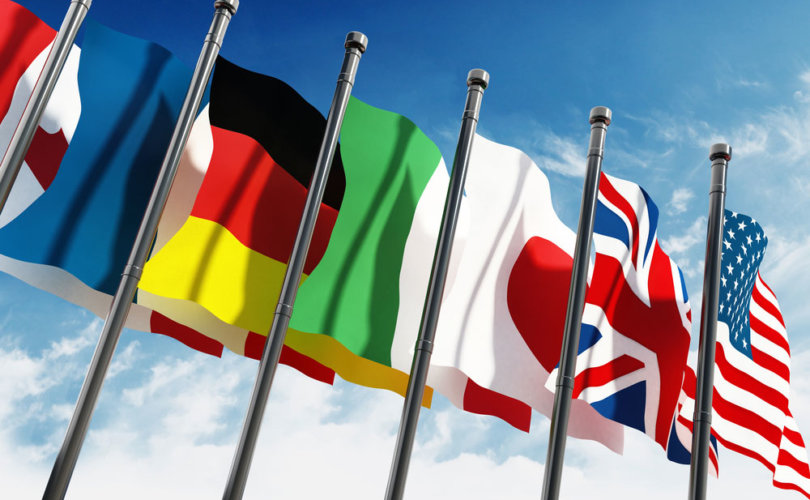 May 27, 2016 (pop.org) – Leaders of the world’s most powerful countries are meeting this week at the 2016 G7 Summit in Ise-Shima, Japan. The 2016 Summit, like previous G7 meetings, has focused on some of the most pressing issues in the modern world. Items discussed included China’s bogus claim to the entire South China Sea, the Syrian refugee crisis, ways to rebuild a war-torn Ukraine, and formulating a strategy to defeat ISIS. But now G7 leaders are committing to advancing “sexual and reproductive health, rights, and services,” a term that, for pro-abortion activists, is synonymous with abortion on the international stage.

A group of lawmakers pushed for access to abortion and “sexual and reproductive health” to be included as a topic of concern at this year's Summit. A recent conference sponsored by the United Nations Population Fund (UNFPA) and the International Planned Parenthood Federation (IPPF) paid for a gaggle of pro-abortion lawmakers to assemble in Japan to pressure the G7 to support of radical pro-abortion policy.

The so-called “Global Conference of Parliamentarians on Population and Development Toward the 2016 Ise-Shima Summit” (GCPPD 2016) took place in Tokyo on April 26-27. The 100 or so left-leaning politicians in attendance predictably called upon world leaders to repeal laws in defense of life and increase access to abortion.

The GCPPD 2016 declaration calls on the G7 to “remove legal barriers” to abortion, and to interpret existing abortion laws to ensure the maximum availability of abortion:

By “ensur[ing] the availability of…abortion” in countries where abortion is already legal, the GCPPD 2016 declaration calls for laws put in place to protect unborn life, such as mandatory waiting periods or requiring that sonograms be made available for women considering abortion, to be thrown out. These and other protective measures put in place on the state level in the U.S. have been effective in saving lives and reducing the number of abortions.

As abortion is available on-demand in most G7 nations already, the GCPPD is really interested in having these countries—big supporters of population control worldwide—use their foreign aid programs to promote abortion elsewhere.

Here the conferees follow the UNFPA in lockstep in calling for pro-life countries to “remove legal barriers” to abortion. The GCPPD declaration calls for pro-life countries to either legalize abortion or, at the very least, to interpret laws in defense of life to make abortion as easily accessible as possible under the current laws and restrictions.

The pro-abortion movement is well aware that, even where laws are in place to protect unborn life, abortion can still be made widely available if those laws are interpreted loosely. In the hands of a left-leaving judge, for whom the law can be molded to fit their ideological prejudices, this is child’s play.

For example, in Ethiopia, abortion is legal only in a few narrow cases such as life and health of the mother, rape or incest, serious and incurable fetal deformity, or in cases where the mother is physically or mentally “unfit” (so-called) to raise a child. Yet, despite these restrictions, abortion is de facto available on-demand in Ethiopia.

Why? Because when the technical guidelines for performing abortion were put in place by the Ethiopian Federal Ministry of Health (FMOH), the FMOH was “assisted” by the pro-abortion groups Ipas and the Family Guidance Association of Ethiopia, an IPPF member association. Their “experts” ensured that loopholes were written into the regulations that prohibited any accountability measures from being included in the abortion law. As a result, most women seeking abortion are able to simply claim the rape exception in order to gain access to abortion services.

Citing the 2030 Agenda for Sustainable Development, the pro-abortion lawmakers who took part in the GCPPD 2016—who were paid to be there—also committed themselves to advancing “universal access to sexual and reproductive health.” SRH terminology has long been used by activists in attempts to advance abortion on the international stage.

The 2030 Agenda, adopted by 193 nations through a United Nations resolution late last year, sets a target for increasing access to “sexual and reproductive health” (SRH) over the next 15 years. Many countries continue to exercise their sovereign right to reject any notion that SRH includes a “right” to access abortion, but the international cabal of abortion groups led by IPPF and UNFPA continue to push.

The Sustainable Development Goals (SDGs) laid out in the 2030 Agenda, much like the now expired Millennium Development Goals, will serve as the framework for international cooperation for aid and development, dictating the focus of foreign aid for the next decade.

We at PRI have predicted that Sustainable Development Goal 3.7, which includes a commitment to “sexual and reproductive health,” would be interpreted by activists to advance abortion. That has now happened, even though abortion is not mentioned in SDG 3.7.

The GCPPD 2016, one of the first instances where an alliance of lawmakers has met to carry out the 2030 Agenda, has now made it clear that they believe that “sexual and reproductive health” includes a mandate to increase access to abortion.

The 2030 Agenda calls upon parliamentarians to play a crucial role in implementing SDGs. Parliamentarians who were self-selected to attend the GCPPD meeting in Japan are now playing their assigned role to a “T.” They are creating the impression, through their declaration addressed to the G7, that the “parliamentarians of the world” believe SRH should include increased access to abortion.

Although this year's G7 Summit has not explicitly addressed access to abortion, G7 leaders have nonetheless committed to “ensuring sexual and reproductive health and rights without discrimination of any kind” and to “provide access to sexual and reproductive health, rights and services.” As many activists consider SRH to include access to abortion, the adoption of strong SRH language in the G7 Ise-Shima Leaders' Declaration is troubling.

GCPPD’s call for increased access to abortion builds-up momentum among pro-abortion allies. One of the two groups organizing GCPPD 2016, the Japanese Parliamentarians Federation for Population (JPFP), is a population control-minded group of members of the National Diet who promote abortion, birth control, and population control in Japan and abroad. JPFP has worked closely with IPPF for over 40 years. And they are enough of a political force in Japan that they count Former Prime Minister Yasuo Fukuda as its Honorary Chair. Current Japan Prime Minister Shinzo Abe, the host of this year’s G7 Summit, delivered the keynote address at the GCPPD 2016.

An agreement among G7 leaders to promote “sexual and reproductive health”—including abortion—could well lead to increased funding for abortion overseas. It might also see G7 leaders using their influence with lawmakers in their home countries to loosen restrictions on abortion there as well.

Agreements among world leaders at the G7 Summit are not legally binding, to be sure. But even as G7 leaders agreed only through a non-binding declaration to promote SRH and abortion around the world, funding and support for SRH will continue and perhaps increase. The womb will become a more dangerous place.

This article was originally published on the Population Research Institute website and is re-published with permission.